My 61-year-old mom is totally extreme

DECEMBER 8, 2009 — My 61-year-old mom is totally extreme. Granted, she hasn’t joined Shaun White on any heli snowboarding trips, but after she survived a particularly death-defying bike crash on a sandy trail during a 2002 mountain biking excursion into the Santa Rosa Mountains with me, my brother’s friends started referring to her regularly as “The Extreme Mom.” Reluctantly, I admit that, when the accident happened, I tried to calm her nerves by insisting that her injuries looked minor. But when family and friends saw the full arm cast that the emergency room doctors gave her to protect her badly-broken arm, the new moniker stuck. 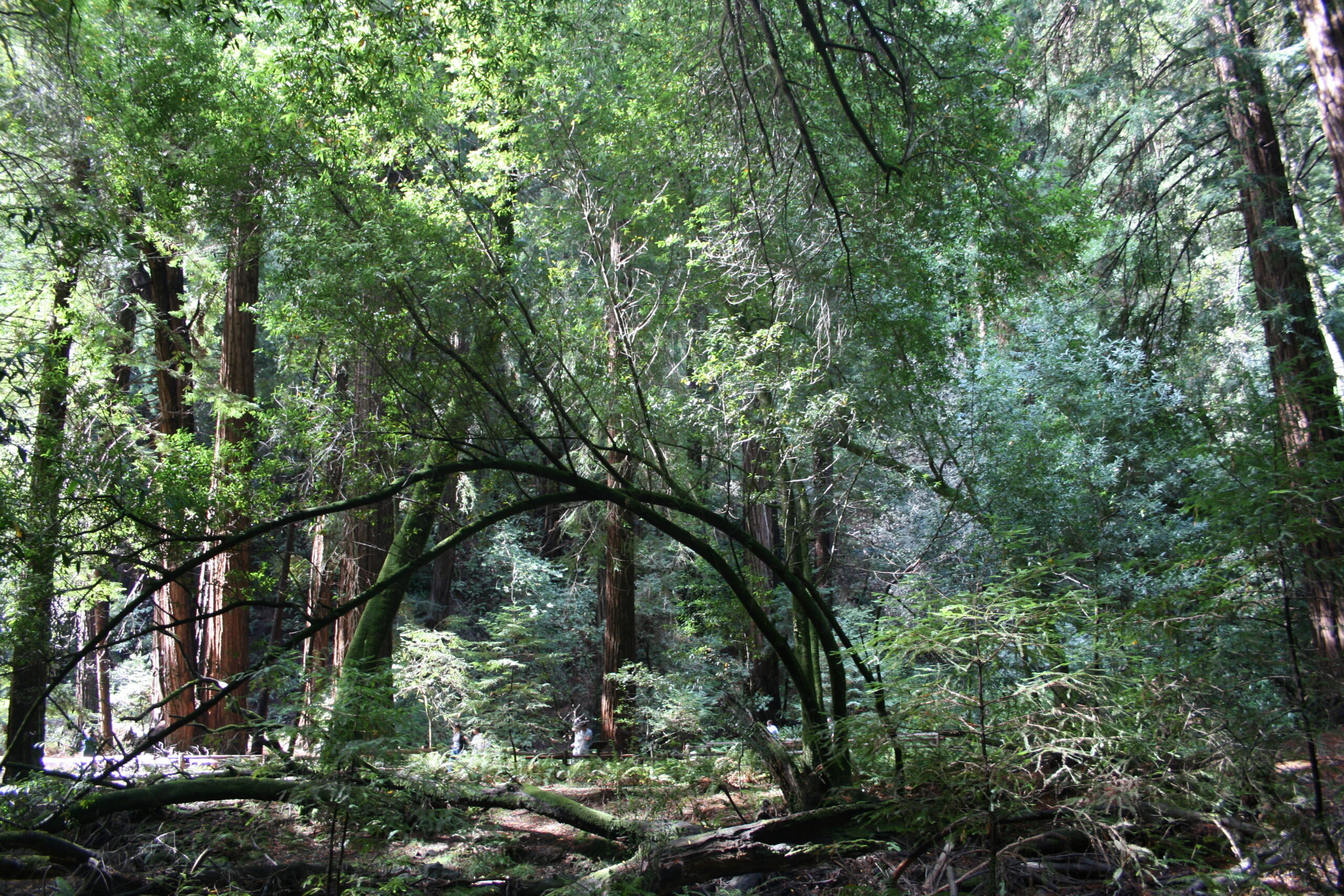 Almost half of Muir Woods is filled with old growth Coast Redwood trees.

Though the arm cast helped solidify her epithet, it wasn’t the first example of her penchant for outdoor adventure. In 2004, she defeated a number of strenuous hikes with the family in the Galapagos Islands off the coast of Ecuador. In 2005, she joined me on a hike to the top of Washington’s Mt. Pilchuck, a 6-mile trip with 2,166 feet of elevation gain and some tricky boulder scrambling at the top. Most recently, she single-handedly planned a family trip to South Africa and Botswana, a vacation that included watching a zebra give birth from only 50 feet away and stalking a solitary leopard across the African Bushveld.

Unfortunately, while I live in California, my parents live in the Midwest and my brother lives on the East Coast. Though this arrangement can be inconvenient, we often end up using this to our advantage. Why should my brother and I jump on planes to Ohio for a family meeting when all of us could, almost as easily, meet in Ecuador or Africa?

Of course, since cost is a factor, we don’t always end up in such exotic locations. Because my mom usually needs to travel to the West Coast for business every year, she and I cope with the long distance between us by having a yearly get-together in California. This year, we met in San Francisco — she had some meetings there, and the city is a short drive away for me. But when we arrived, we realized that we had been there so many times that we had already seen most of the typical tourist attractions: Fisherman’s Wharf, the Golden Gate Bridge, Alcatraz, Chinatown, Lombard Street, Haight-Ashbury, Golden Gate Park, the Presidio, and trolley rides. Nevertheless, we stopped by Golden Gate Park to visit the Japanese Tea Garden and checked out the King Tut exhibit at the de Young Museum. (The exhibit, while fascinating, treated us to an anticlimactic finale because the Egyptian government no longer allows King Tut’s Gold Mask or mummy out of Egypt.) But our excursion took only a couple hours of a three-day vacation. 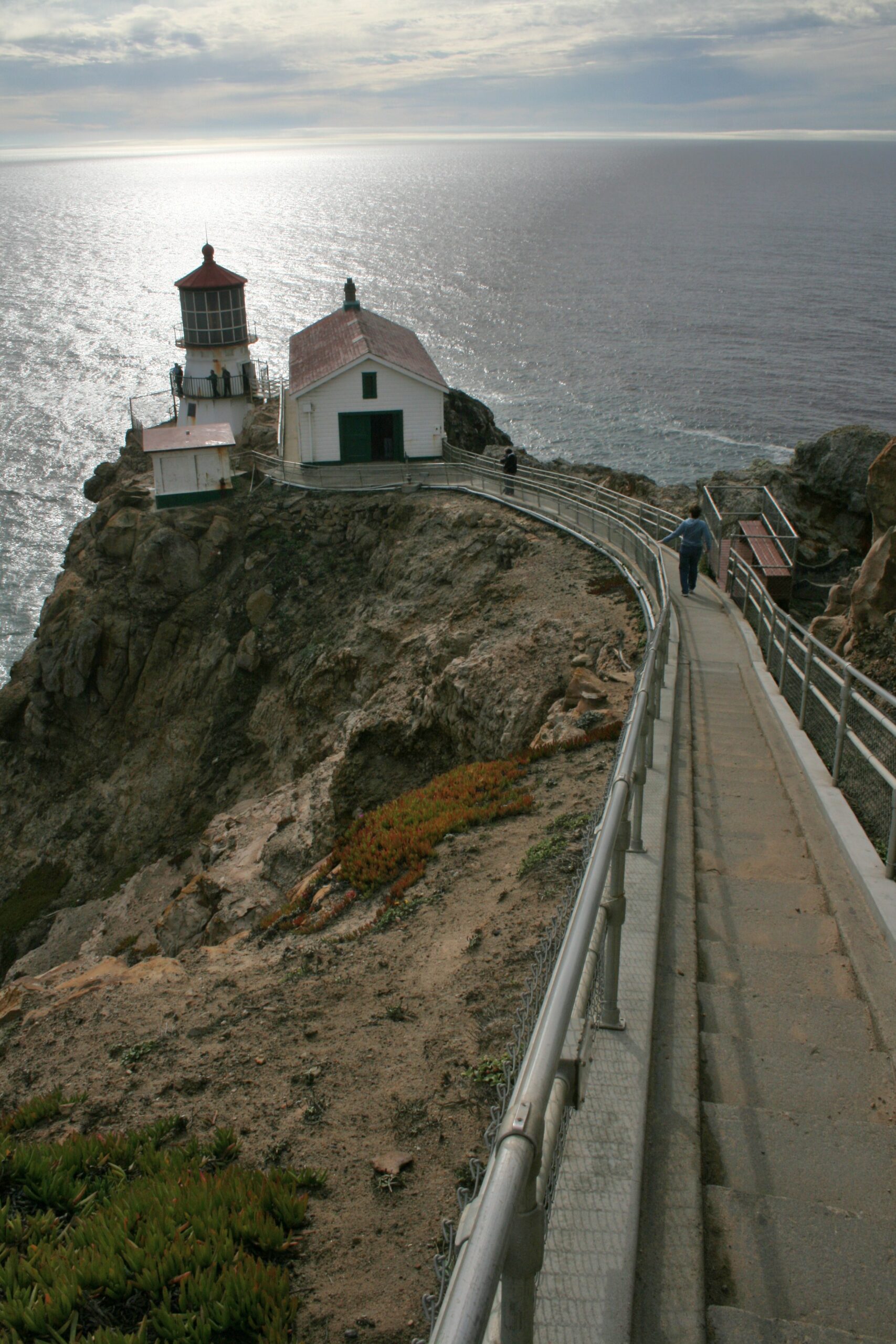 The Point Reyes Lighthouse sits at the bottom of a long staircase on the edge of the Pacific Ocean.

Back in our hotel room, I scoured the web and sold my Extreme Mom on a set of adventurous San Francisco daytrips, and the next day, we began driving northward on one of my favorite roads in the world, Pacific Coast Highway, toward Muir Woods and Point Reyes National Seashore. 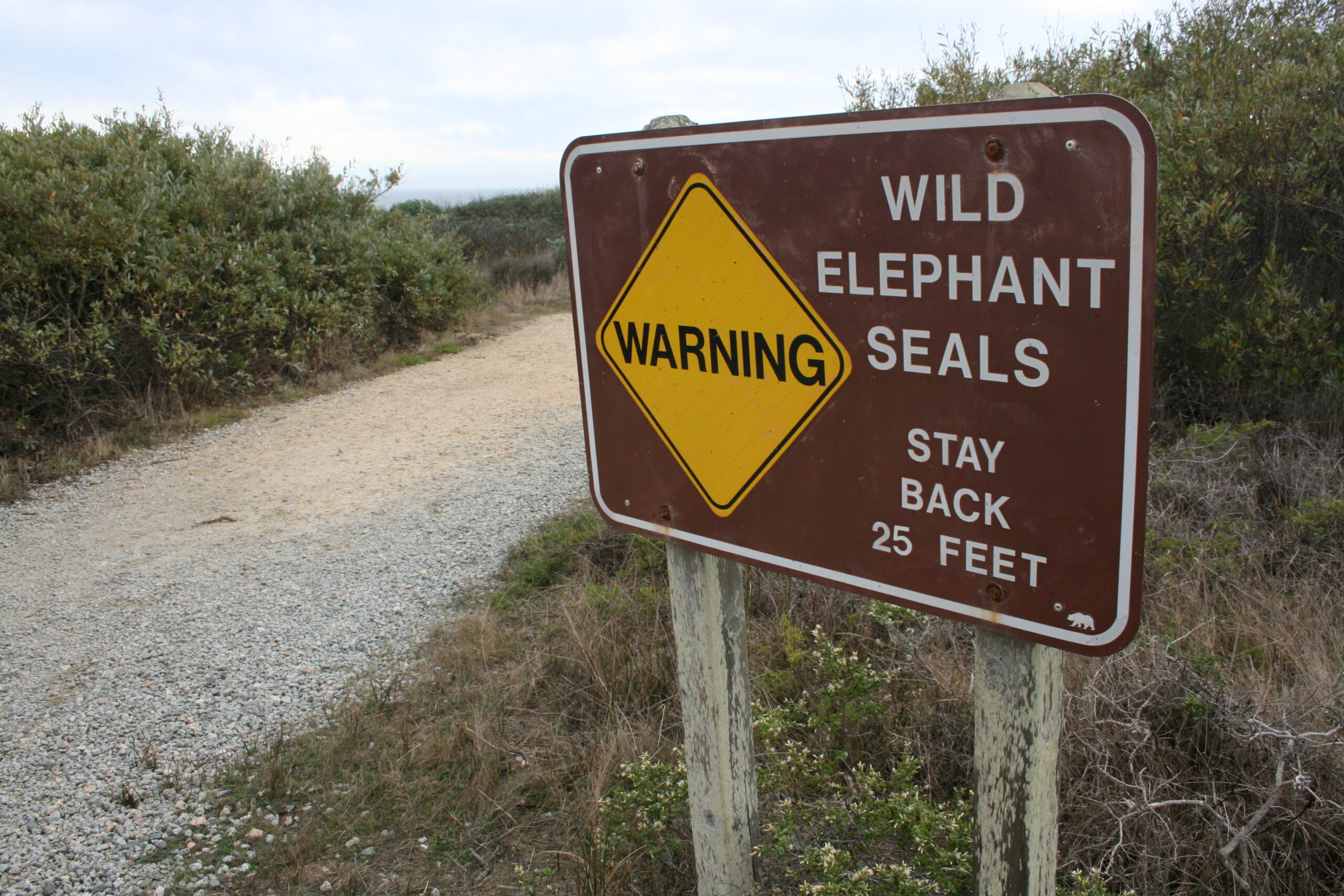 When we arrived at Muir Woods, I was disappointed to see that, since the park is only 12 miles from the Golden Gate Bridge, everyone in San Francisco had had the same daytrip idea. After finally locating a parking space, we asked the ranger for a hiking map and headed off into the forest. It was easy to see why Bay Area residents flock to the park: the majestic old-growth redwood trees tower over hikers like people over ants, and the lush, dense, and shadowy environment made us feel like we were walking through an Ansel Adams photograph. We followed the two-mile, tourist-filled hiking loop through Bohemian Grove, Cathedral Grove, and Redwood Creek. Then, when I suggested that we escape the tourists by taking a detour on the Ben Johnson Trail — a much longer route that eventually connects to the 9.5-mile Dipsea Trail to Stinson Beach — my amazing Extreme Mom didn’t even balk. 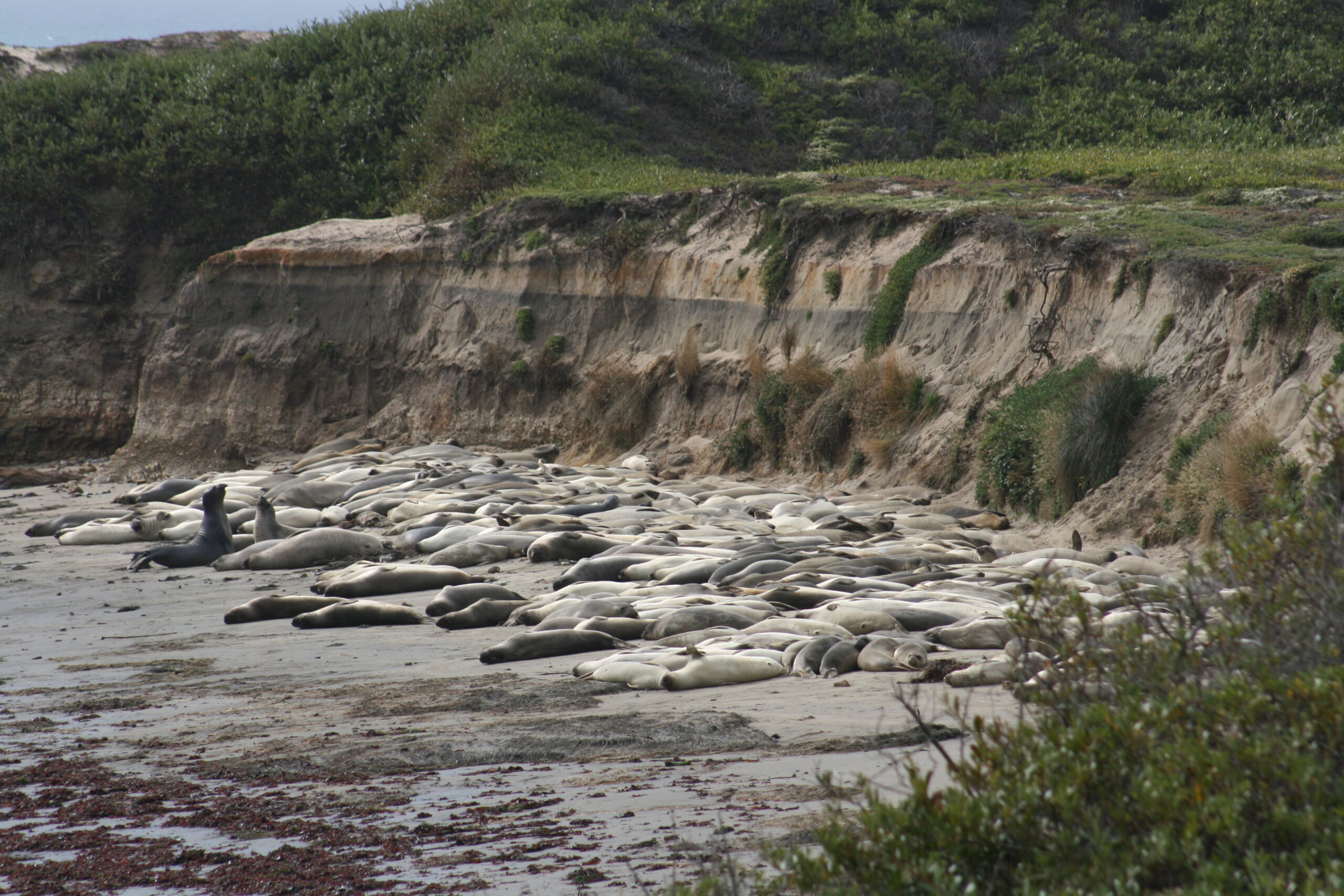 After returning to our car, we continued north and stopped in quaint Point Reyes Station to visit the surf shop, the deli, and Point Reyes Books. (They didn’t have the book about the Congo we were looking for, but the fact that they had a large African history section was impressive.) We then proceeded down Sir Francis Drake Boulevard, the foggy, winding road past historic cattle ranches that leads to the lighthouse at Point Reyes. The trip was like driving through a cloud, but when we finally arrived at the visitor center above the lighthouse, the mist abruptly began to clear.

The lack of fog revealed the orange “CAUTION” sign warning visitors that the 302-stair climb required to visit the lighthouse is the equivalent of ascending a 30-story building, and I became a bit nervous that my mom might not be able to make it. But she didn’t even flinch. When we made it to the beautiful lighthouse as the sun set behind it over the Pacific Ocean, we gazed at the dramatic coastal vistas and explored the lighthouse lens room. Afterward, she soldiered back up the stairs without complaint. Apparently the challenge of climbing up 302 stairs was nothing compared to the trouble my brother and I caused her as crying infants. Everything she had endured from the two of us growing up had prepared her for the trip to Point Reyes. (These days, I cause her significantly less trouble, I think.) 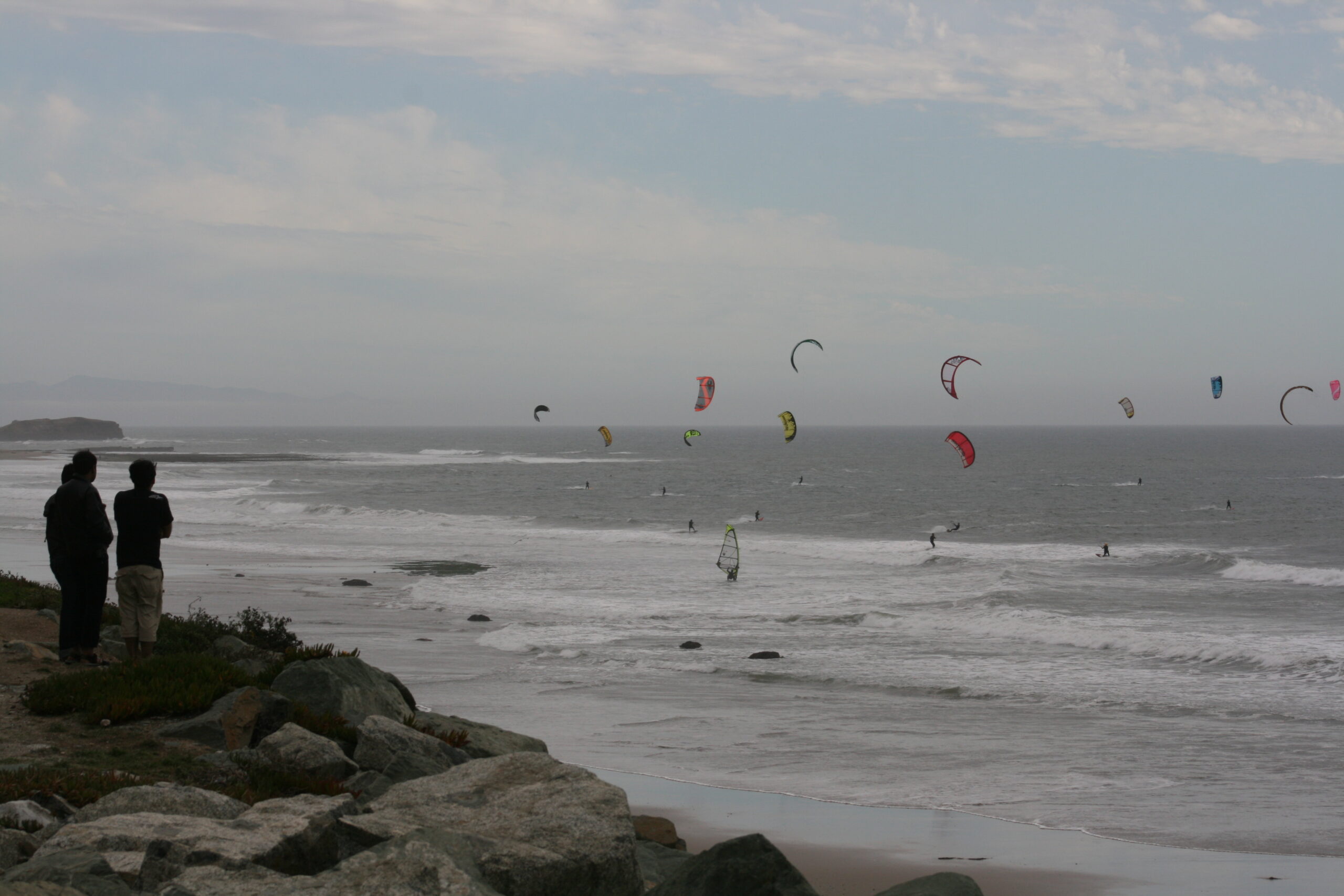 The following day, my mom and I decided again to escape the city, this time in a southerly direction, toward Año Nuevo State Park, the site of the largest mainland breeding colony for the northern elephant seal in the world. We followed the Park’s four-mile trail through sand dunes, beach grass, and beach strawberry to the shore, past a hilarious (yet unnerving) “WARNING: WILD ELEPHANT SEALS” sign, which I desperately wanted to steal for my apartment. I didn’t. 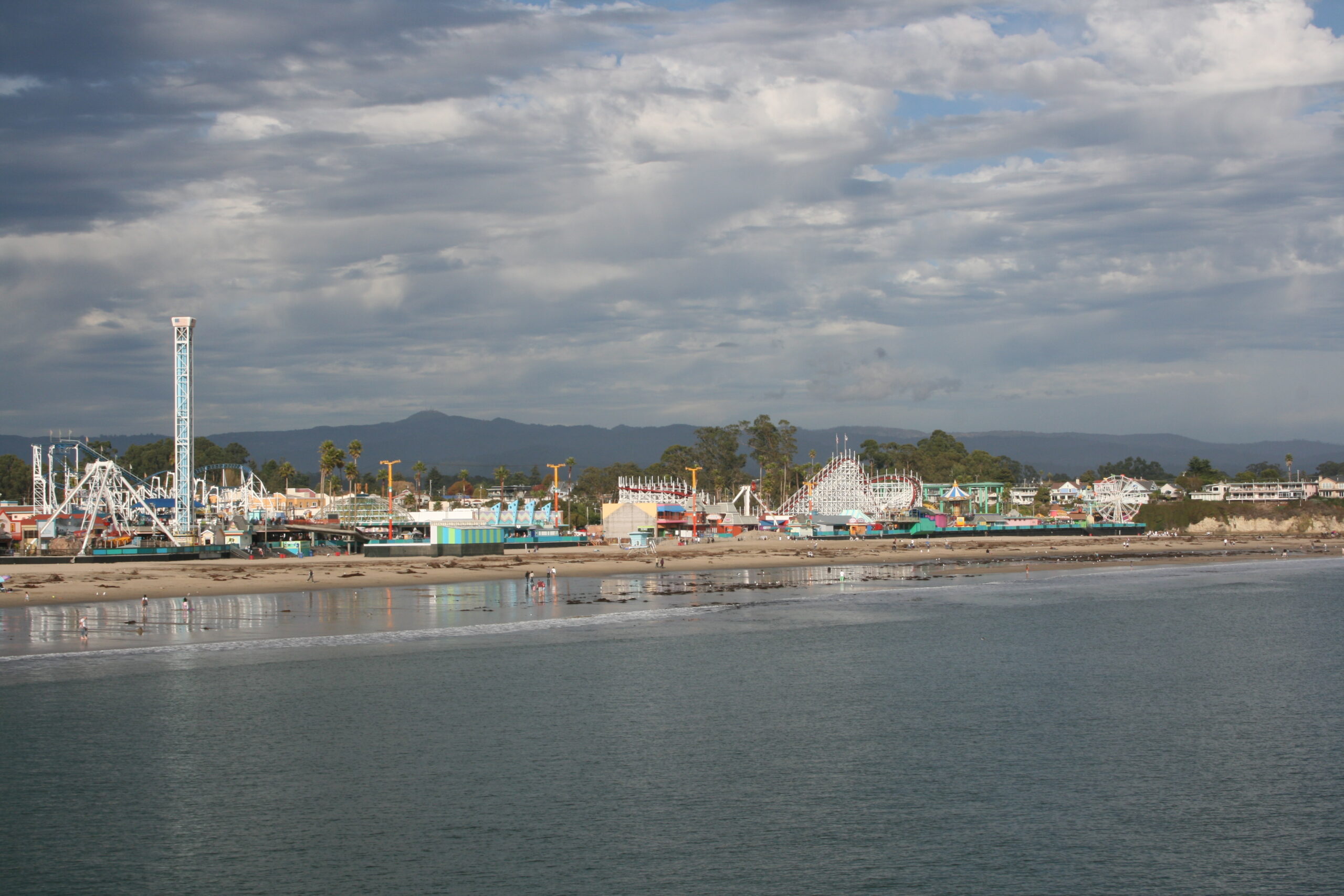 Impressively, the prospect of terrifying wild elephant seals ahead didn’t faze my Extreme Mom. We soon arrived at the end of the trail, which stopped well short of the beach to protect the wild elephant seals from wild elephant tourists. The park’s grand finale felt too much like the time I watched Coldplay from the bleachers of Seattle’s KeyArena and not enough like the time I saw The Postal Service from the front row of Seattle’s tiny Crocodile Cafe. Nevertheless, we were lucky enough to witness a couple male seals (bulls) fighting each other for supremacy, which they often do to establish their territory and guard their harem of female seals (cows). It felt a bit like what it might be like to watch Kayne West and Kevin Federline fight over a girl: during the fight, the female seals looked uninterested, probably off looking for the elephant seal version of George Clooney. I wasn’t afraid — I knew the fighting bulls were no match for my Extreme Mom. 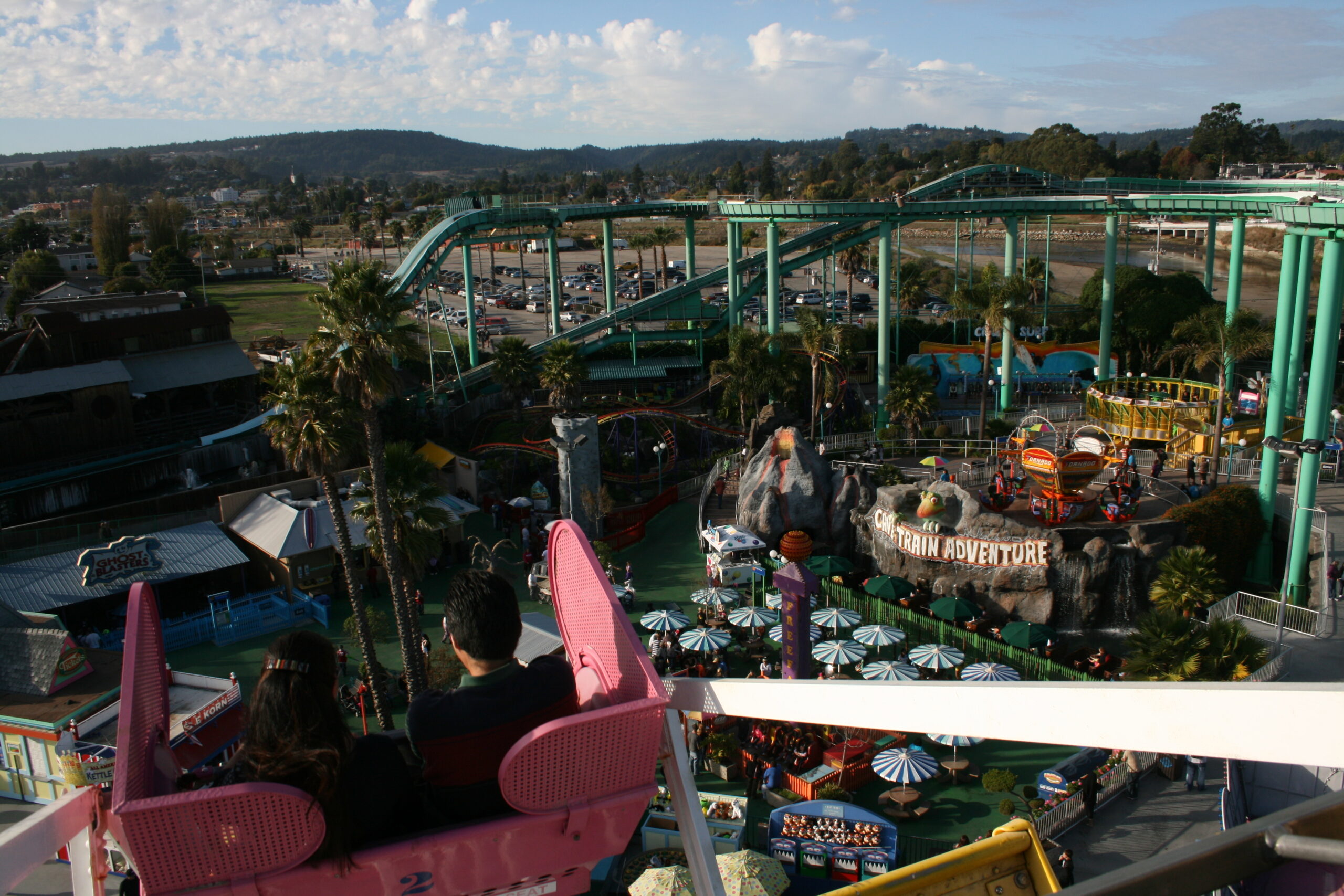 After our seal visit, we continued our drive south toward Santa Cruz. We stopped on PCH for awhile to watch hundreds of kite surfers take advantage of the weather. When we arrived in Santa Cruz, we visited the Santa Cruz Beach Boardwalk, California’s oldest seaside amusement park. We ate churros as we strolled down the beach, watching the surf ebb and flow, beach volleyball players spiking the ball, and teenagers on dates, screaming while riding the famous Giant Dipper roller coaster. (It’s the sixth oldest in the US; the world’s oldest is Leap-the-Dips in Pennsylvania.)

I asked my Extreme Mom if she wanted to ride the roller coaster, but, surprisingly, she said that she didn’t think she was up for that much adrenaline. Instead, we bought Ferris Wheel tickets and relaxed in the colorful gondolas above the Boardwalk, enjoying Northern California’s exceptional seaside views.

At first, I was a little disappointed that my mom didn’t feel extreme enough to ride the Giant Dipper. But, as I looked down at the Beach Boardwalk from above, I realized that she doesn’t need to prove herself anymore. The decades she spent working tirelessly in her demanding career, while simultaneously raising me and my brother, were extreme enough — especially when taking into account her willingness to confront wild elephant seals.

Of all people, she deserved a relaxing ride on the Ferris Wheel.

MUIR WOODS NATIONAL MONUMENT contains 240 acres of old growth Coast Redwood trees and is part of the 75,298-acre Golden Gate National Recreation Area, one of the largest urban national parks in the world. From San Francisco, drive north from US-101 on Pacific Coast Highway, then turn right on Panoramic Highway. The trip is about 40 minutes. The Muir Woods brochure explains the history of the park and includes a map of the park’s six miles of trails. More adventurous day-hikers can follow the 9.5-mile Dipsea Trail outside the park to Stinson Beach. If you visit between November and April, watch for coho and steelhead salmon spawning in Redwood Creek.

POINT REYES NATIONAL SEASHORE features historic cattle ranching and oyster farming and offers Gray Whale-watching (from mid-January to mid-March) from the Point Reyes Lighthouse. From San Francisco, drive north on Pacific Coast Highway (or US-101), then take Sir Francis Boulevard for about 20 miles to the lighthouse. The trip is about two hours, but take some time to stop in the cute towns of Olema and Point Reyes Station. The lighthouse’s 302 stairs are open 10:00 AM to 4:30 PM Thursday through Monday, and the Lens Room is only open 2:30 PM to 4:00 PM.

AÑO NUEVO STATE RESERVE is the site of the largest mainland breeding colony for the northern elephant seal in the world — but be warned, even after you have hiked for four miles, you won’t be able to get too close to the seals. Still, volunteers will help you see them through telescopes. From San Francisco, drive south on Pacific Coast Highway for about two hours. On the way, you can also visit the attractive lighthouse at Pigeon Point.

SANTA CRUZ is home to the Beach Boardwalk, California’s oldest surviving seaside amusement park. Drive south from San Francisco for two hours on Pacific Coast Highway or US-101 to get there. While in the city, you can also check out the Surfing Museum, UC Santa Cruz, Natural Bridges State Beach, and Capitola, a beach village on Monterey Bay.