DECEMBER 15, 2009 — When I heard that my high school girlfriend had started working as an information technology consultant for Accenture after college and had joined the Atlanta Rollergirls, I wasn’t sure I believed the rumor. The Rollergirls I could understand — my ex-girlfriend had always strived to live charmingly outside the boundaries of the norm — but Accenture? What could possibly be more pedestrian than technical consulting? And how could her two pursuits possibly fit together?

The rumors didn’t make sense to me, but I didn’t have a way to verify their accuracy. I’m not particularly proud of it, but I ceased communication with her one day in high school for no obvious reason, and we had barely talked since. (In my defense, high school boys are idiots, and I was no exception. Though, for the record, I don’t use “Unexplained Radio Silence” as a breakup technique any more.) 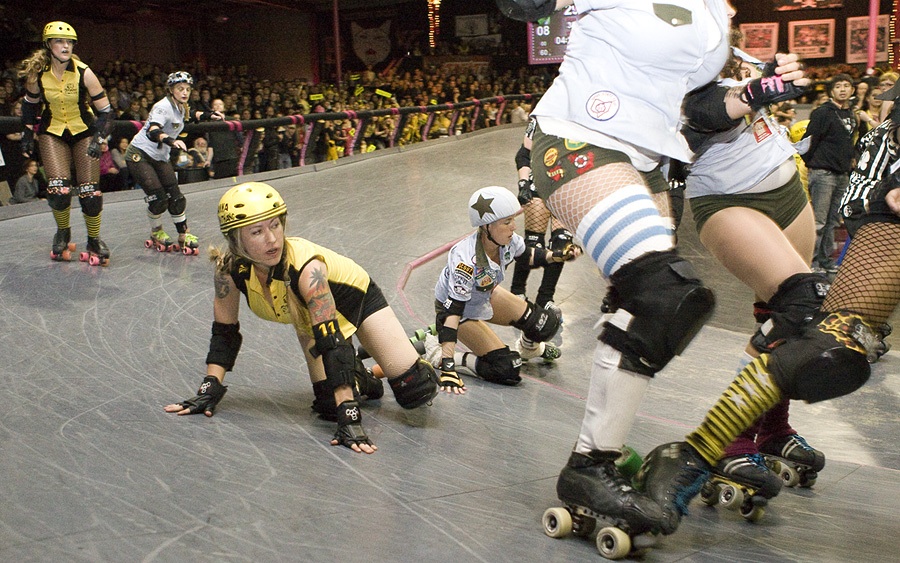 The championship bout between The Tough Cookies and The Swarm heats up as athletes fall to the track floor. (photo by Michael Zampelli)

I suppose our relationship was destined for failure from the start. Like many teenagers, I focused most of my energy on trying to fit in — I wanted to go to “cool” parties and impress peers with attention-getting stunts. She focused most of her energy on being nonconformist — she liked to wear thrift-store clothing and constantly reinforced her nerd-cred with great calculus grades.

Recently, Facebook — and its ability to prompt long parted friends to start awkwardly communicating again — came to the rescue. My high school girlfriend messaged me to tell me that she reads (and likes!) Without Baggage. Quickly, I checked out her profile and discovered that, indeed, she worked for Accenture and, indeed, her roller derby pseudonym is “Shannihilator.”

Puzzled by the idea of a combination technical consultant-roller derby girl, I went to see Whip It, the Drew Barrymore-directed coming-of-age film about a Texas teenager named Bliss (played by the adorable Ellen Page) who joins an Austin roller derby league. For one thing, the movie taught me the mechanics of the game: two five-player teams skate around an oval track, each consisting of three “blockers” (defense), one “pivot” (last line of defense), and one “jammer” (scorer). Jammers score points by passing and lapping members of the other team’s pack of defenders, while the blockers and pivot try to prevent the other team’s jammer from passing. 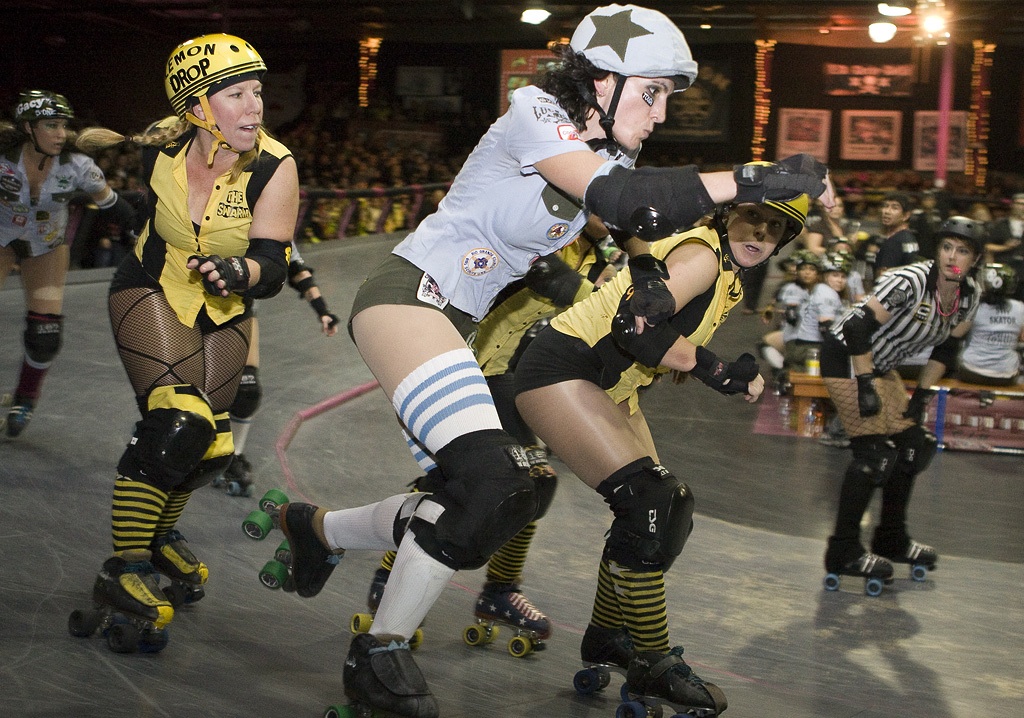 More importantly, the movie helped me understand the post-feminist ethos of the sport. (Though men’s roller derby leagues do exist, most are female.) In the movie, Bliss escapes her conservative parents and miserable job as a waitress in a small Texan diner by joining a roller derby team called The Hurl Scouts. She puts on an outfit, clearly inappropriate for selling Girl Scout Cookies, and starts competing under the name “Babe Ruthless.” The movie suggested that roller derby allows women to express themselves in way they can’t at school and work, with unique clothing, pseudonyms, and personalities disconnected from the rest of their lives. 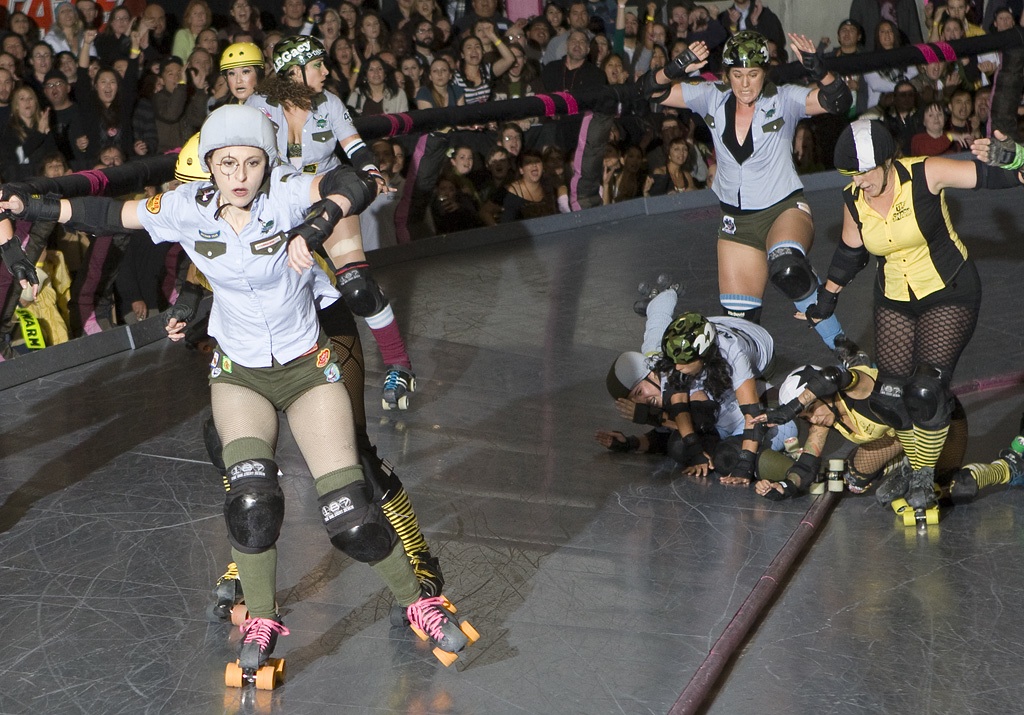 Skaters fall to the floor during the LA Derby Dolls 2009 championship game. (photo by Michael Zampelli)

Soon after I saw the movie, my ex-girlfriend urged me, via Facebook, to see roller derby in person. I took her advice and after buying three standing room-only tickets far in advance (who knew that roller derby sells out?), I went with two friends to watch the championship bout for the LA Derby Dolls — Southern California’s only all-female, banked track roller derby league — between The Tough Cookies (the 2008 league winners and basis for The Hurl Scouts in Whip It) and The Swarm (a team undefeated in 2009 with members that literally buzz as they skate). After being checked for weapons and cameras by burly security guards and visiting the small indoor street fair with vendors selling art, food, and roller skates, we found a place to stand at the edge of the arena where, if we stood on our toes, we could kind of see under the banked track’s railing and watch the game. (For most games, $17 gets you standing room-only tickets, but $40 gets you seats.) 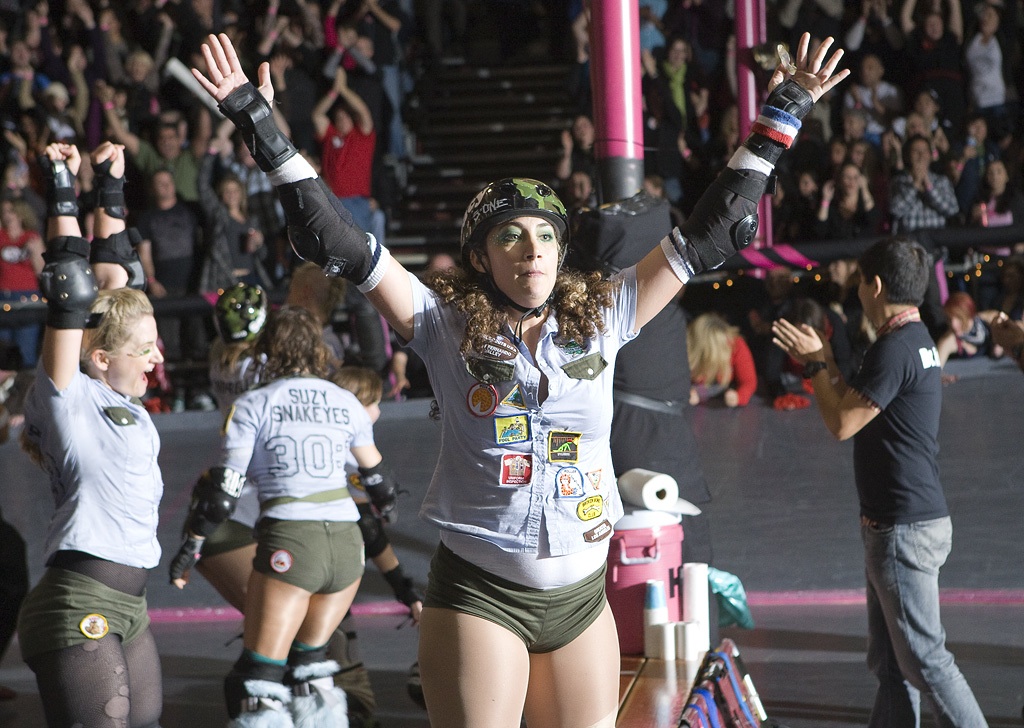 The energy of the game is infectious — the athletes race around the track in gothic-punk uniforms (known as “boutfits”) at breakneck speeds. Because the sport involves women frequently smashing into each other, it is visceral and immediate in a way that many other women’s sports are not. Two of the jammers for the Tough Cookies, Constance “Laguna Beyatch” Marshall and Stephanie “STEFCON 1” Azores quickly became my favorites — they made flying around the track and crashing through The Swarm’s defense look almost effortless. When STEFCON 1 performed a particularly impressive maneuver, bashing through The Swarm and leaving a swarm of women in bumblebee outfits on the floor, the sound of the crowd was deafening. Eventually, The Tough Cookies prevailed, and during the trophy ceremony, my friends and I were already discussing purchasing season tickets. 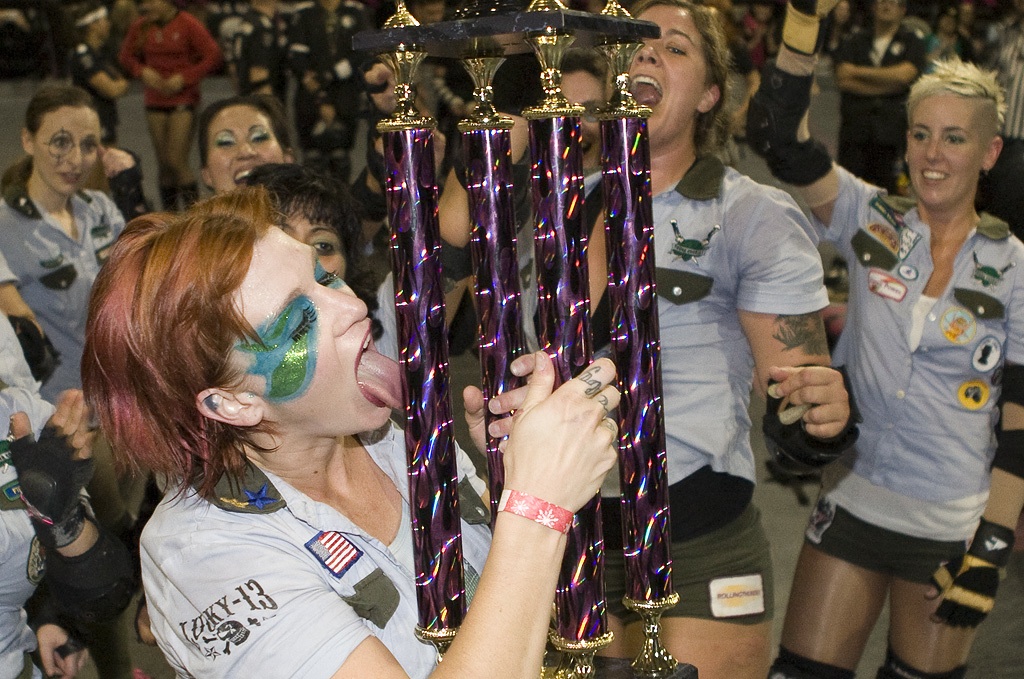 I know what you’re thinking: women wearing revealing clothing on roller skates and beating the crap out of each other sounds like porn. But I was surprised to discover a rink filled not with size 0 blond models, but with women of all shapes and races who mostly looked like they had cut out of work early, changed into Girl Scout and bumblebee outfits in the car, and made it to the track just in time for the game. They were there, not to arouse, but to win. The crowd, didn’t seem to expect titillation either — it was mostly full of typical-looking Los Angelinos — a lot of couples and groups of friends — just looking for some entertainment on a Saturday night.

In Whip It, the main character Bliss uses roller derby as a way to rebel against her conservative upbringing and menial job. But, I suspect that for the real-life women of roller derby — single moms, bartenders, lawyers, professors, students, policewomen, and technical consultants — Whip It‘s story of their motivation is too simplistic. In a post-feminist world, women try to define themselves in their own terms, not in the context of rebellion or escape.

By day, Laguna Beyatch works as a coordinator in the film industry, and STEFCON 1 works as a manager for a software company. Watching these self-possessed women as they left others lying on the floor in their wake on the track, I couldn’t help but think of my high school girlfriend. I pictured her working during the day as a technical consultant, navigating America’s corporate culture in business attire while flaunting her intellectual horsepower. Then, I visualized her skipping out of work early and racing to the roller derby track. I imagined her taking off a pinstriped suit and putting on her “boutfit.” I envisioned her skating at breakneck speeds, totally in control, with her bright red hair flowing behind her.