Searching for the perfect coffee shop

A lifelong quest for caffeinated nirvana.

One day a couple weeks ago, I spent a few hours working on my laptop, drinking Chai tea and eating blueberry pie, in a Seattle coffee shop called University Zoka. I was eyeing Zoka’s case of baked goods, trying to decide how many pieces of pie is acceptable for a person to eat while in public in a single day, when Beth, a twenty-something med student sitting nearby, started talking to me. I was afraid that she might begin lecturing me on publicly-appropriate pie eating, but instead we started chatting about traveling and our favorite coffee shops around the globe.

It was then that I heard myself blurt out something that could only have been prompted by the drunken euphoria caused by heaps of Zoka’s pie.

“This,” I said with a gravitas that should have been followed by my revealing that we were twins separated at birth due to a hospital blunder, “is my favorite coffee shop in the whole world.”

As soon as I said it, I felt embarrassed. In the whole world?! I thought. Had I lost my mind? After all, I haven’t even visited all of the countries in the world, let alone all of the coffee shops in them, and I felt like I had neither the knowledge nor authority to make such a statement. Furthermore, I don’t even like coffee. I never drink it. So, in accidentally giving Beth the false impression that I might be her long-lost coffee connoisseur twin brother, I also made myself, inadvertently, into a coffee poseur. 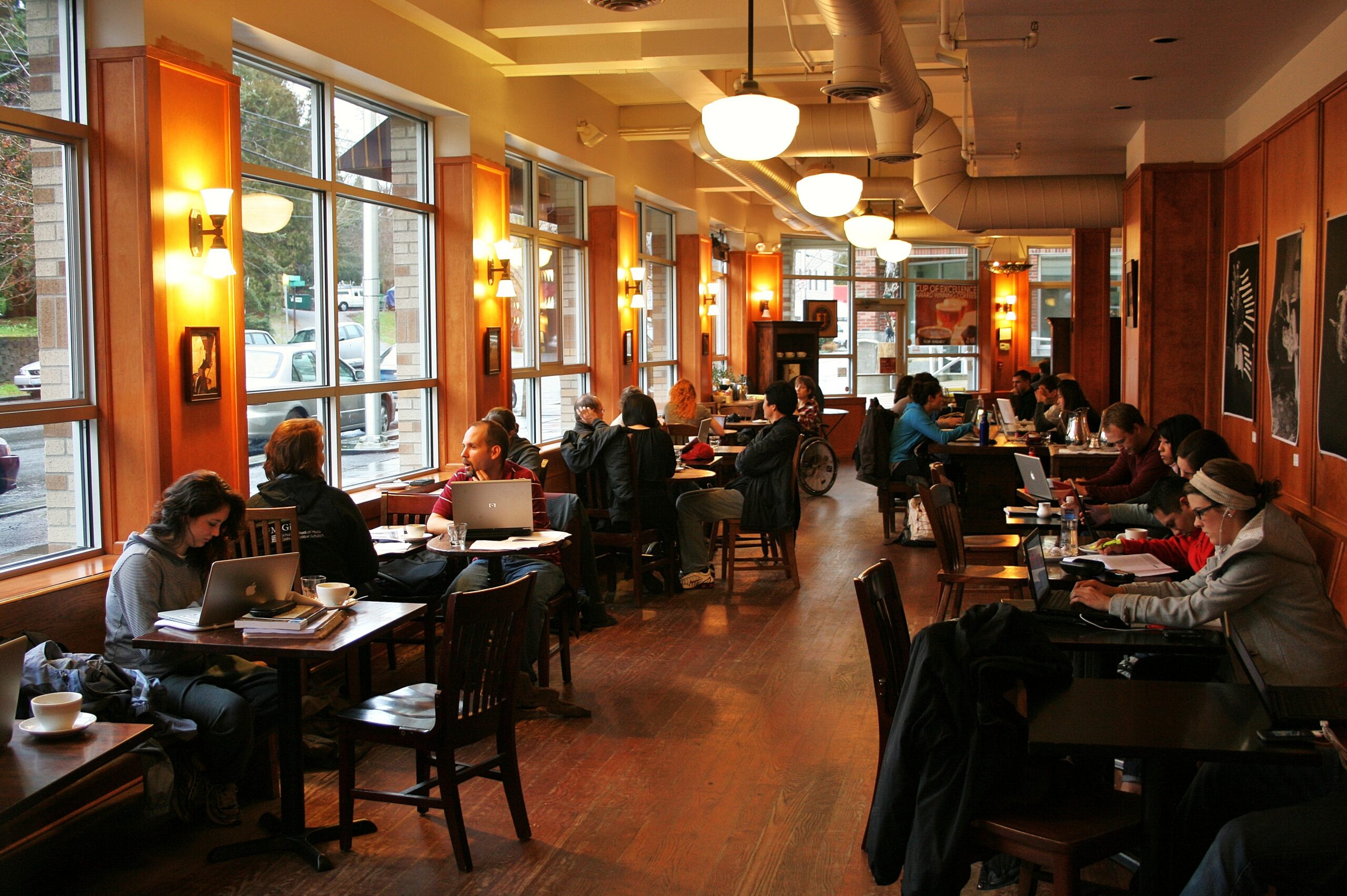 University Zoka in the U District, Seattle, Washington

But everyone is searching for something — love, success, happiness, needles in haystacks, and meter-free parking spaces are common examples. I’ll avoid commenting on my progress toward those goals — though, once in awhile, I do find decent parking spaces — but I admit that I, too, am searching. I’m searching for the perfect coffee shop.

While it’s true that I don’t like coffee, I love Chai tea, cider, smoothies, and all of the other non-coffee drinks that coffee shops serve. But even more importantly, I love coffee culture.

My obsession with coffee shops started in college when I realized that I could get a lot more work done in the student center’s coffee shop than I could in my dorm room, surrounded by distractions like the Internet, my comfy bed, and my college girlfriend. When I moved to Seattle after school, I frequently met my friend Jessica on cold, rainy Seattle mornings at Cafe Europa (now gone) on Capitol Hill. Daily, I ordered a Chai and breakfast Panini from Melody, the adorable barista, and then drove to work with the soothing feeling of a hot drink cascading down my throat while battling the heavy traffic and slick asphalt across Lake Washington. When Europa eventually closed, I started spending a lot of time searching for my next favorite Seattle coffee shop. I hesitate to list all of the fantastic places that I eventually discovered — like Zoka, Top Pot, Vivace, Bauhaus, Trabant, Solstice, Stumptown, Caffe Ladro, and El Diablo — because there are so many good ones, and I know that I’m inviting angry e-mails from permanently-caffeinated coffee addicts certain to pummel me for failing to mention their favorite. 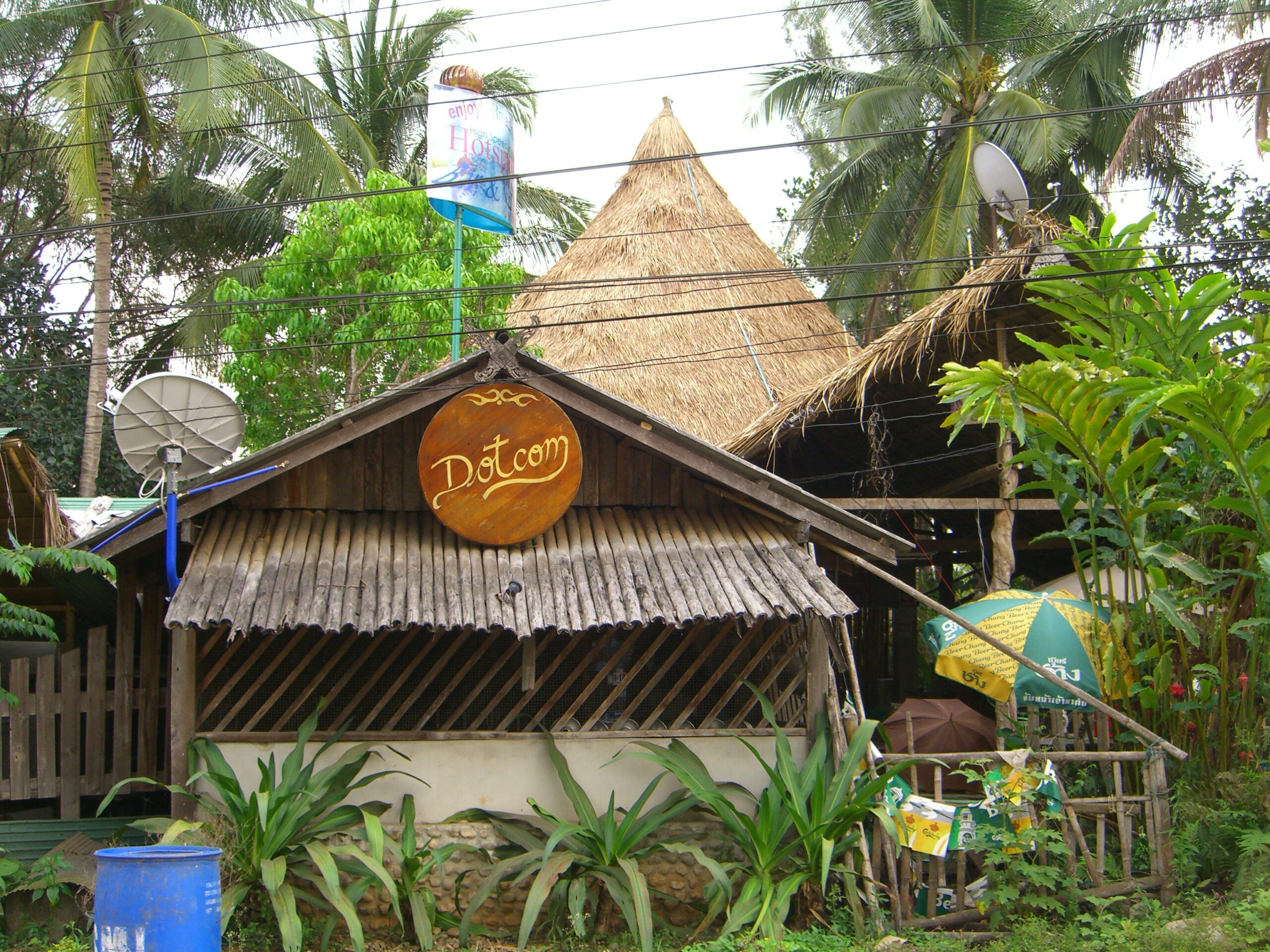 Sometimes, I even ended up at some special Starbucks locations (the U Village flagship store and Capitol Hill’s Olive Way location). After all, Starbucks was born in Seattle, and while it’s in fashion now to hate large retail chains, the company is one of the few chains that some argue helped the entire industry flourish instead of putting the independent stores out of business. Regardless, most agree that Starbucks almost single-handedly spawned Coffee’s Second Wave — the American-wide, renewed interest in coffee and coffee shops — that eventually led to Third Wave, the gourmet coffee renaissance that we’re enjoying today. (The Folgers freeze-dried coffee craze was the First Wave.) 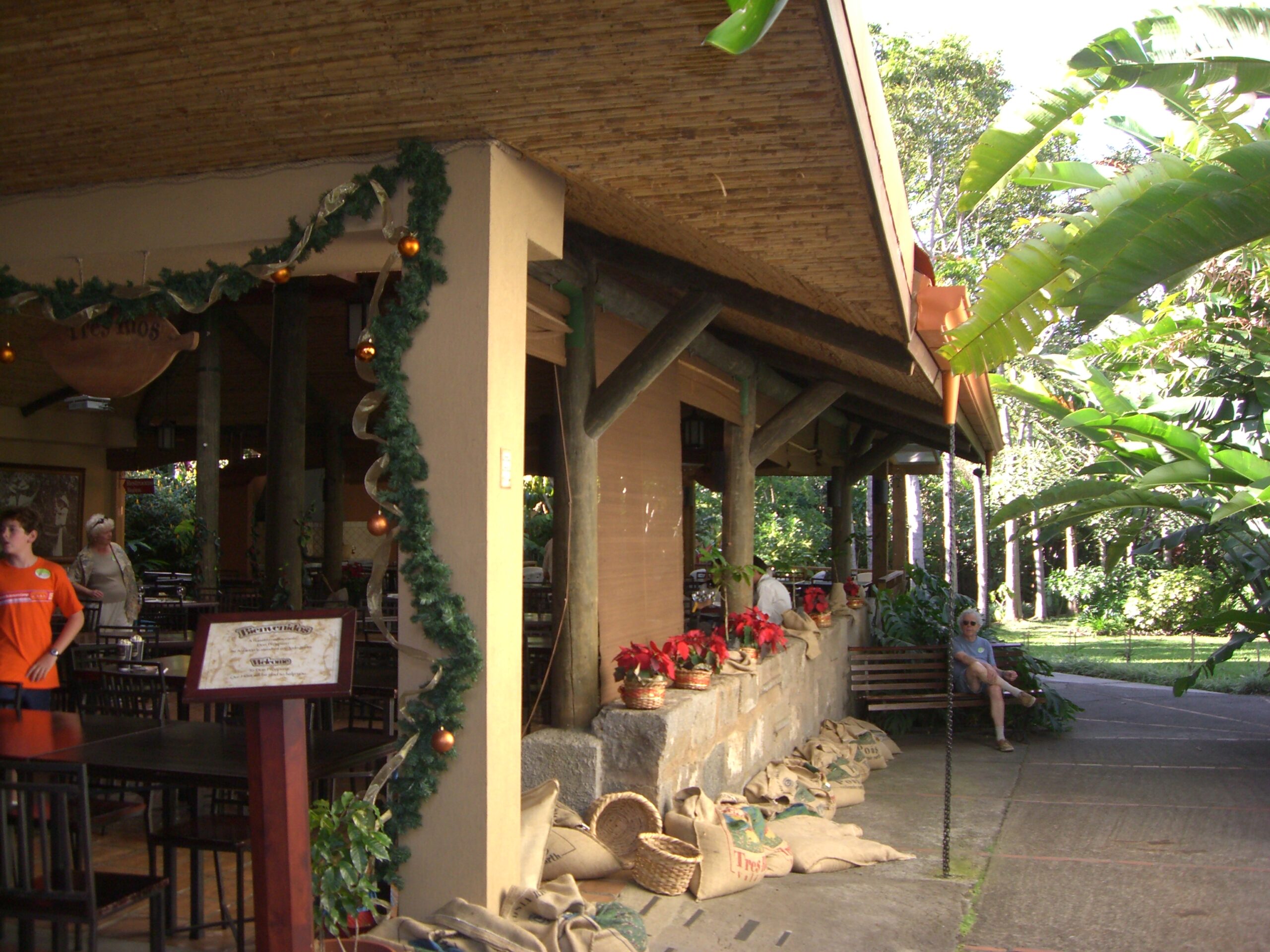 The cafe at the Cafe Britt Coffee Plantation in Heredia, Costa Rica

Soon after settling in to Seattle, I flew to Glasgow, Scotland for a quick Thanksgiving getaway to visit my then-girlfriend after having not seen her for two months. When we reunited, she introduced me to her personal perfect coffee shop and home away from home, Offshore, a funky place overflowing with eclectic music and fashionable jeans. (For some reason, the UK’s selection of professionally “distressed” material and stylish washes hadn’t made it to the States yet.) As we drank tea there, near the University of Glasgow, I loved seeing, in person, the physical spaces of my then-girlfriend’s life in Scotland, and it made me happy to know that she had found both a life herself and friends with awesome pants. 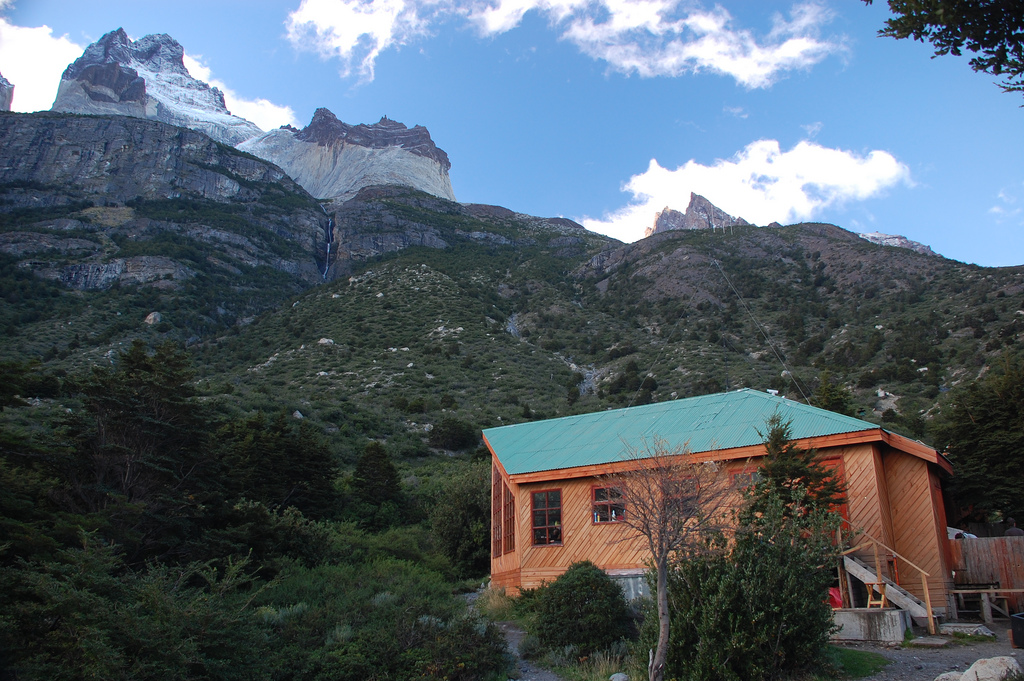 Seattle’s fantastic coffee cafes and Glasgow’s funky hideaways taught me the attributes of a great coffee shop: 1) great coffee 2) great tea/Chai, 3) lots of comfortable, densely arranged seats for relaxing and intermingling, 4) a full menu of good food, 5) free Internet access, 6) laptop outlets, 7) an unlocked bathroom (I shouldn’t have to ask permission to pee), and 8) a unique character or vibe with an attractive, cozy interior. The best coffee shops make you want to settle in for hours — then return home to decorate your apartment to match.

Soon, I became bizarrely obsessed with finding my perfect coffee shop, one that fulfilled every item on my wish list and more. I started seeking out exotic coffee shops and cafes even more enthusiastically, always in search of my own perfect hideaway.

In Delft, Netherlands — famous for its endearing canals and for serving as a backdrop for Baroque painter Vermeer’s work — I spent almost an entire week quietly reading novels at cafes with canal-side seating, including the famous Kleyweg’s Stads-Koffyhuis. Months later, I found myself in Um Phang, a tiny border town in the middle of the Burmese-Thai jungle, where I spent time writing while sitting on a tree stump in Dotcom, a bamboo-covered hut offering the only coffee and satellite Internet access around for hundreds of miles. A year later, in Costa Rica, I enjoyed a pit stop at the Cafe Britt coffee plantation’s cafe. Last year, in remote Chilean Patagonia, during a rainstorm in the middle of an 81-mile hike, my brother and I took cover in the cafe of Refugio Los Cuernos, a small hut in the wilderness that served us coffee and tea while we waited out the rain, playing board games with our friends from New Zealand. This year, on a month-long hiking and camping expedition in the western US, I discovered the charming Latte Da in Lee Vining, outside Yosemite’s east entrance, where my friend Wini and I spent a day drinking lattes, watching hummingbirds on the shop’s back lawn, and talking to world-reknowned rock climber and frequent Latte Da customer Ron Kauk. 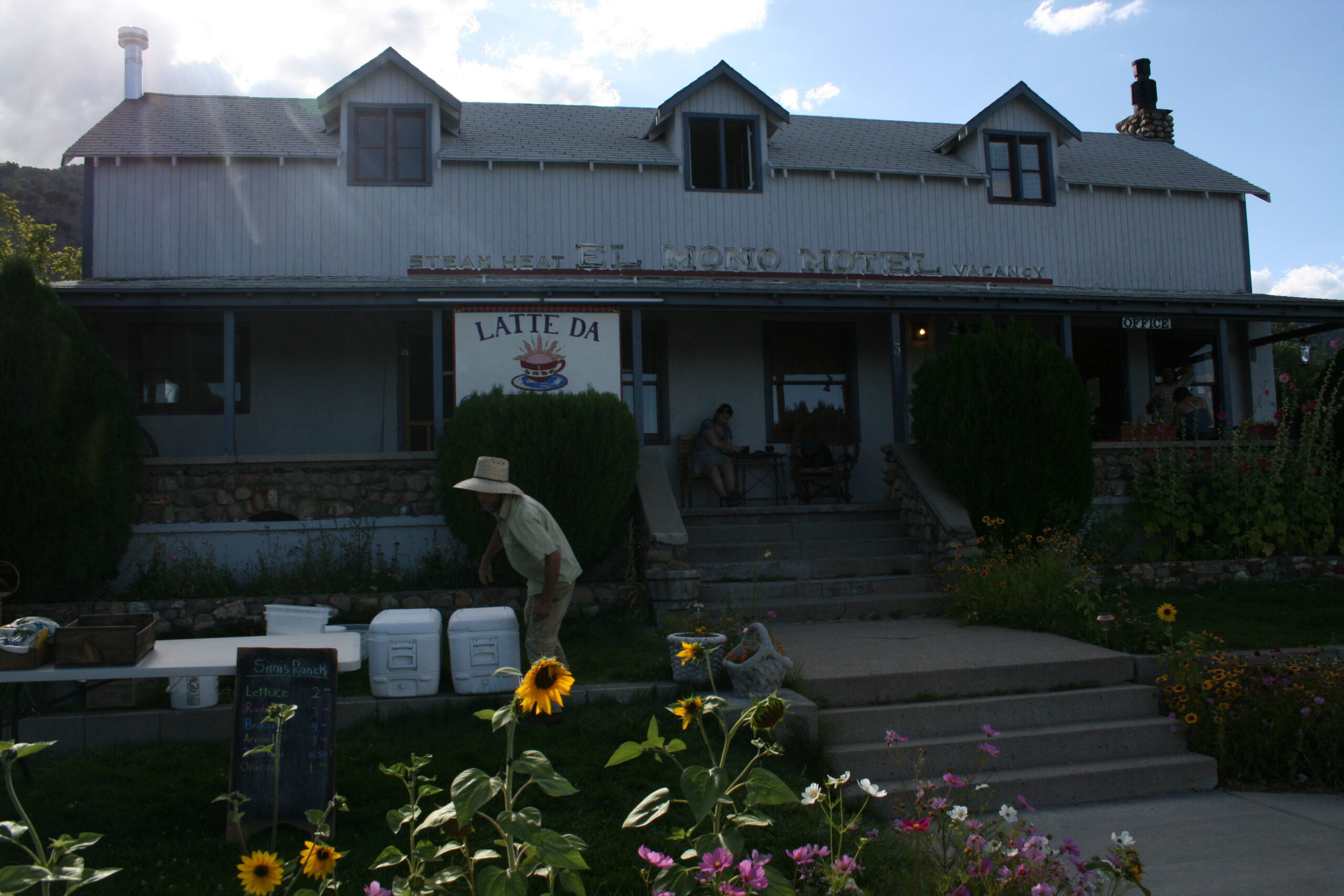 I’ve also loved cafes I’ve found in more urban locations: Ritual Coffee Roasters serves one of the most revered cups of coffee in San Francisco; the Stratford Court Cafe in San Diego (really Del Mar) serves great sandwiches and coffee on the outdoor patio of a quaint beachside house; the bright pink Mount Nelson Hotel in Cape Town, South Africa serves high tea on their beautiful back lawn, while the less pretentious Afro Cafe near Cape Town’s Greenmarket Square has a wide African coffee selection and a hip interior; Cafe Lalo on New York’s Upper West Side made for a great late-night place to grab coffee and dessert while I lived in the City; and Kaffeine in London has popular coffee and a creative menu. 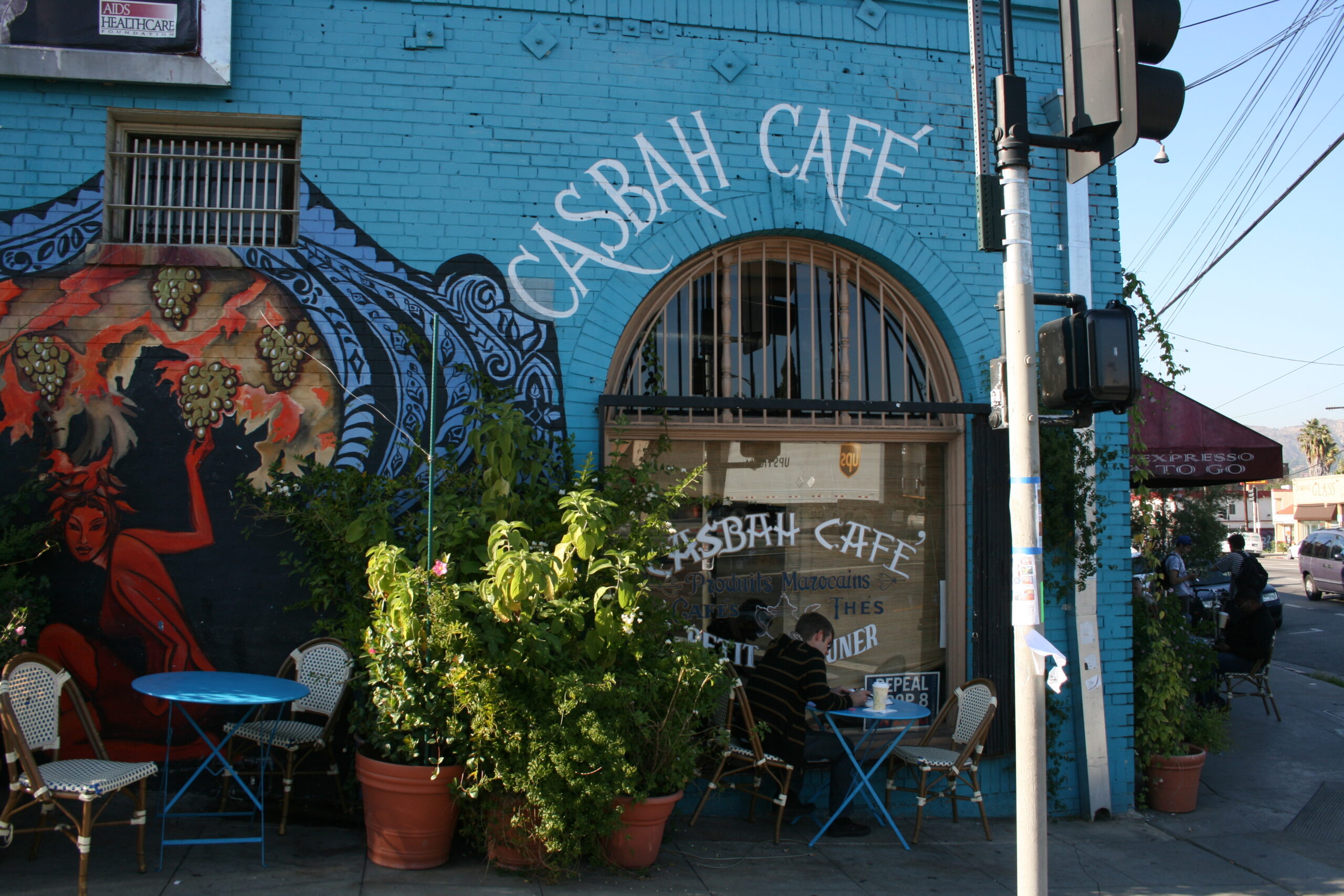 Now, I live in Los Angeles, a sprawling disaster of a city with over 16 times more residents than Seattle. Yet, it has many fewer quality coffee shops than its smaller West Coast neighbor, and almost none of its coffee shops compare to Seattle’s finest. Apparently, the number of months of rain and cold a city endures seems to dictate how much effort coffee shop owners put into their store interiors. The legions of LA’s jobless, over-caffeinated screenwriters may tell me I’m wrong, citing Casbah Cafe, Intelligentsia Coffee and Tea, Literati Cafe, Novel Cafe, and Studio City’s Aroma Cafe as proof that LA’s coffee shop owners know what they’re doing. It’s true that these are great places, but when I’m sitting in them, I often find myself longing for the overstuffed chair in front of the fireplace in Seattle’s University Zoka. So, I keep looking. 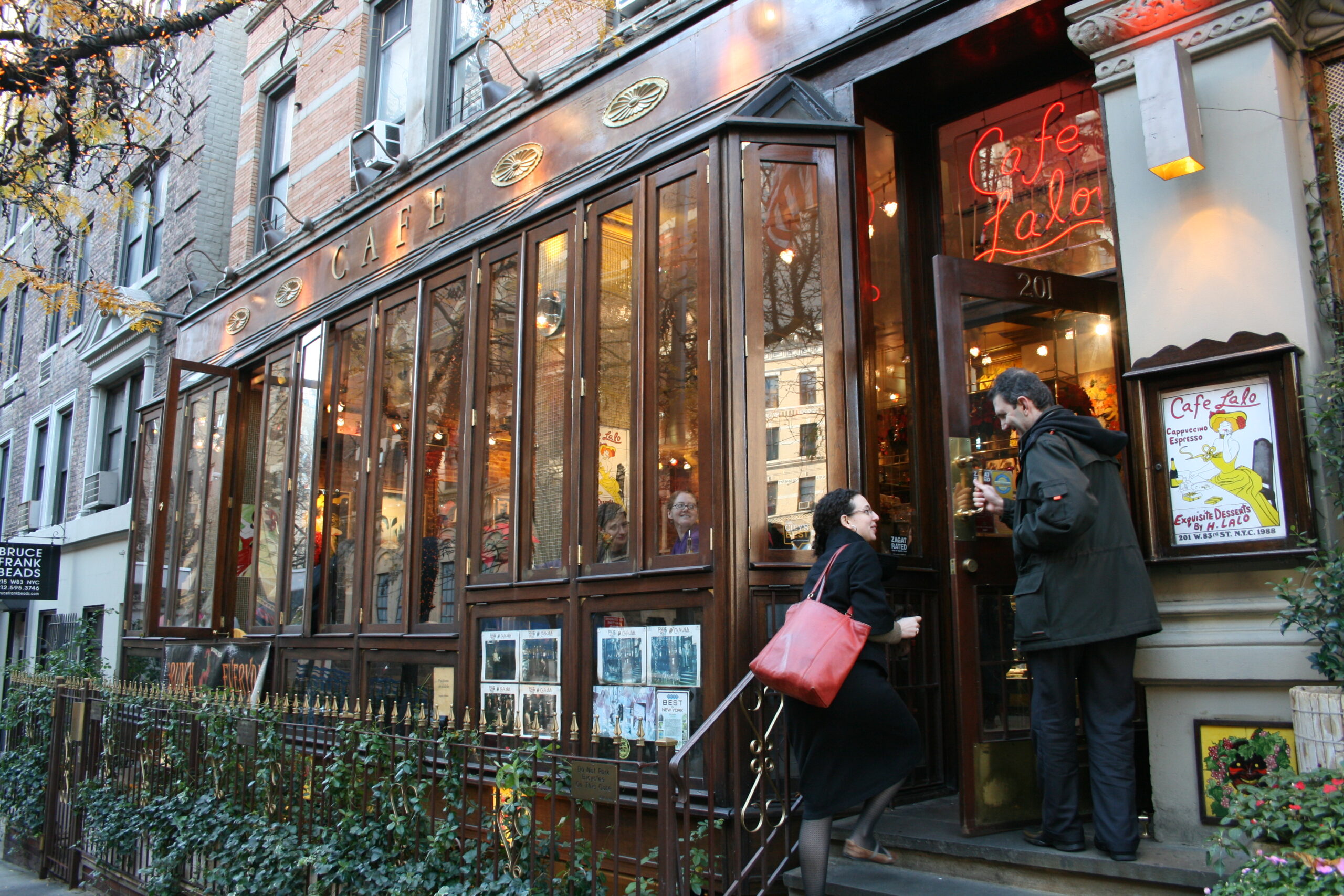 This list is hardly definitive — instead, think of this list as inspiration — a jumping off point to begin your own personal perfect coffee shop search.

CAPE TOWN, SOUTH AFRICA: The Afro Cafe near Greenmarket Square has a range of African coffee and teas and a hip interior. The bright pink Mount Nelson Hotel serves high tea on their beautiful back lawn.

GLASGOW, SCOTLAND: Offshore near the University of Glasgow has a friendly atmosphere and eclectic music.

LONDON: Kaffeine has popular coffee and a creative menu.

LOS ANGELES: Casbah Cafe in Silverlake has a funky Turkish decor and excellent food. Bricks & Scones in Larchmont Village has a cozy atmosphere, grilled cheese, and lots of indoor and outdoor seating. Aroma Cafe in Studio City has reams of attractive outdoor seating and a gourmet menu with great Chai. Novel Cafe in Westwood has exceptional vanilla Chai, good food, and a nice patio for Westwood people watching. Intelligentsia Coffee and Tea and Literati Cafe also are worth a look.

NORTHERN THAILAND: If you ever find yourself in Um Phang on the Thai-Burmese border, let me know if Dotcom still exists. When I visited, it was the only place for hundreds of miles with satellite Internet access and coffee.

YOSEMITE: Latte Da in Lee Vining near Yosemite’s east entrance has a pretty back lawn with a hummingbird feeder and serves great coffee and Chai.

1 thought on “Searching for the perfect coffee shop”