Goodman, my good man! What is that zebra doing?

JANUARY 29, 2008 — There aren’t many cities more beautiful and cosmopolitan than Cape Town, South Africa. During the time we spent there, my family was humbled by Table Mountain, unsettled by the tour of Robben Island, and charmed by the Cape Peninsula. Yet when imagining Africa, most of us conjure images of wild animals, remote Bushmen tribes, and khaki safari outfits; and so, after three days in urban Africa, we set out to find the continent of our imagination.

After a two-hour flight to Johannesburg, a one-hour flight to Maun, Botswana, and a 30-minute flight in a propeller plane that touched down on a grass runway, we arrived in the African Bushveld. More specifically, we landed in the heart of the Linyanti Wildlife Reserve, a 275,000-acre area between the Okavango Delta and Chobe region in northern Botswana.

Quickly, Goodman — our guide and African wildlife expert — arrived at our landing strip in an enormous Land Rover modified with a snorkel for underwater driving. He greeted us with a British accent and drove us through the Bushveld to the Savuti Camp, where a staff greeted us with cocktails, quiche, and small pastries. Without warning, we had been thrust into a Hemingway novel in which “afternoon high tea,” “sundowners” and “my good man” became a normal part of our vocabulary. After warning us against walking on the camp’s raised walkways by ourselves (an elephant could hide behind a tree and trumpet at us or worse), the staff showed us to our “tents.” Only in this surreal, alternate 1920s-like universe could our luxury bungalows have been described as tents, but we thanked the staff profusely and tried to collapse on our plush mattresses. Goodman quickly informed us, however, that we had a strict schedule to which we needed to adhere (game drives started each day at 6am and 4pm promptly!). After confirming our sundowner orders (gin and tonic, all around), we were bouncing on the Land Rover’s seats before we knew it, as Goodman drove us even deeper into the wilderness. 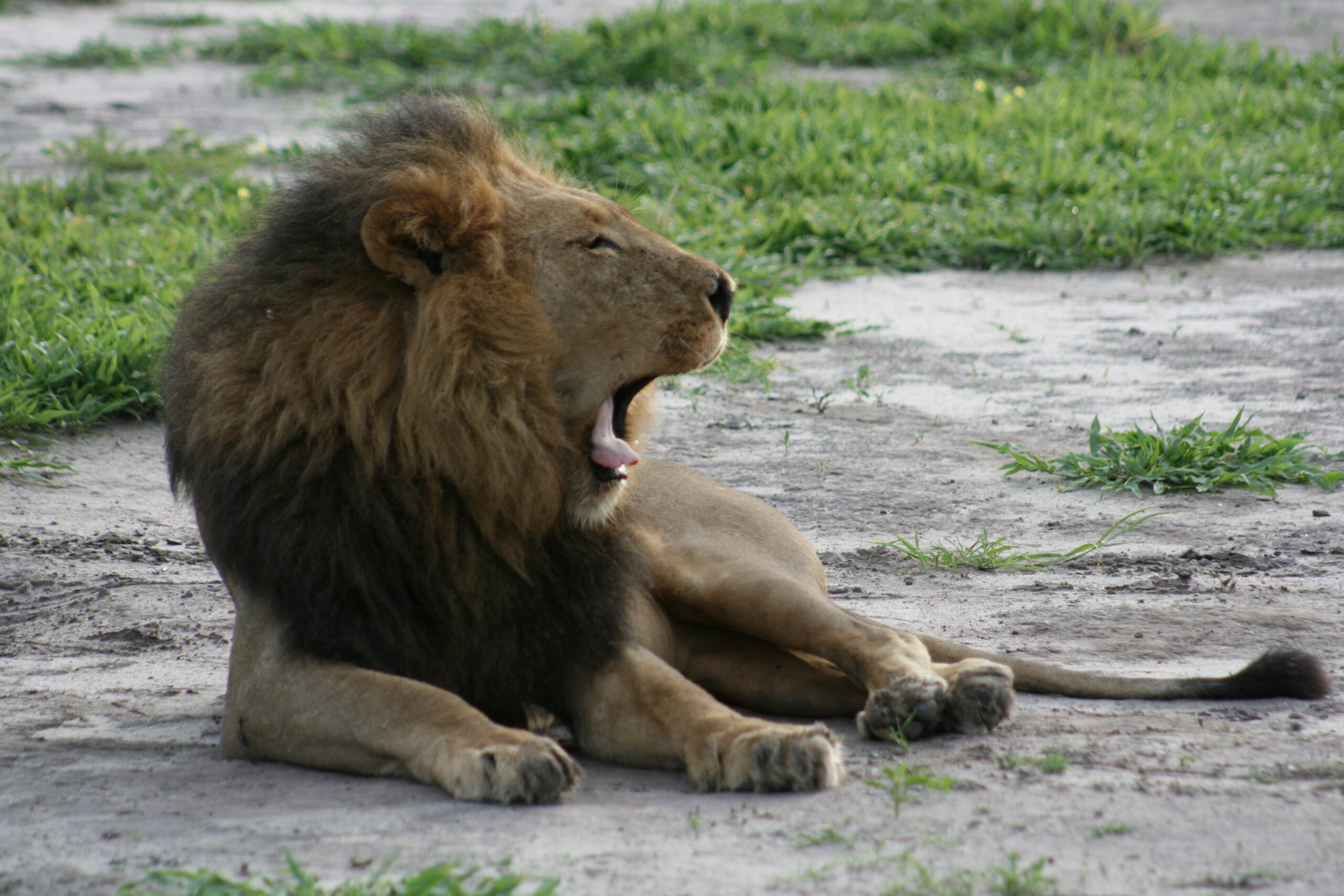 A lion yawns in northern Botswana

Everything we had ever known or seen about Africa and safaris rushed into our heads. We were living in the Lion King, Out of Africa, and The Most Dangerous Game all at once. We had so many questions. Did Goodman really know everything about every animal in the African Bush? (We apologize for ever even wondering whether he would run out of information to teach us.) Was there a chance of us being eaten by a lion? (Goodman almost never let us step out of the Land Rover, and the lions didn’t bother us.) Did its snorkel really allow the Land Rover to drive under water? (We learned that it did, as we drove through deep rivers and lakes.) Was Goodman going to leave us in the middle of nowhere, forcing us to fend for ourselves while an insane Russian general attempted to hunt us down? (No, he had no plans to reenact Richard Connell’s short story).

Most importantly, would we see a leopard?

It’s difficult to describe the awe we felt as Goodman shared his Africa with us. The African Bush is not a zoo, it’s not an animal park, and it’s not Disneyland. As he escorted us across the African expanse, we gaped at herds of literally hundreds of elephants, stared at troops of baboons, and marveled at crowded towers (yes, that’s the correct collective noun) of giraffes.

We even sat quietly — or as quietly as our telephoto lens shutter would allow — as two massive lions lounged on the plain, fooling us into believing them to be harmless, strikingly oversized felines — until, of course, we saw the size of their mouths and teeth when they yawned. So relaxed, so dignified, and so handsome, the two cats couldn’t have appeared more kingly.

Yet we read in a wildlife guide that hippopotamuses, not lions, are the most dangerous animals in Africa. Compared to the lions, the hippos we saw appeared fat, ugly, and inelegant, and we kept our distance. But we soon found them to be as fascinating as our beloved lions, and we watched them perform mating rituals in the water, in which they sprayed excrement at nearby peers and emitted alien grunting sounds.

Zebras were my brother’s favorite — he insisted on their “objectively the best animal” status — and on our final day at Savuti Camp, we came across a large dazzle (yes, really) of them. As we watched them graze in the rain, which surprisingly didn’t seem to bother them, Goodman pointed out that a few of them had pregnant bellies. One of the pregnant zebras seemed to be having trouble cantering and standing, and we quickly realized that she was in labor. She repeatedly switched between standing and prone position as her confused progeny tried to play with and help her, agitating her further. During a brutally honest moment, she violently kicked them away as she endured the pain of labor. Epidurals were nowhere to be seen.

To our absolute astonishment, in the pouring African rain, we watched as a female zebra give birth to a baby. Zebra babies, always at risk of being torn to pieces by a lion, can stand on their own within five minutes and walk within fifteen minutes of their birth. Simultaneously terrifying and poetic, we observed, knowing that at any moment, a lion could wander by and gobble up the adorable baby zebra. It didn’t matter whether we were watching or not; there was no way we could interfere or protect.

Every minute following her birth was excruciatingly suspense-filled. We stayed quiet and hypnotized. Then, the baby zebra stood. She walked. She began grazing. Right before our eyes, as surely happens hundreds of times a day in Africa, she became a zebra.

The rich reward of looking for a leopard is not what you’d expect.

FEBRUARY 6, 2008 — Leopards are solitary. Unlike most of Africa’s big game — elephants live in herds, giraffes move in towers, and even lions travel in prides — leopards rarely associate with each other. They are stealthy, versatile, and hard to spot, and after three days in the Bushveld, we still hadn’t seen one.

Our guide Goodman showed us a rich world of wildlife at Savuti, exceeding our greatest expectations, and we knew that experiencing Africa through his eyes was a priceless adventure. It was tough for all of us to wave goodbye to him from our propeller plane as we took off toward Kwetsani Camp in the Okavango Delta’s Jao Reserve, the last stop on our Africa itinerary.

The Okavango Delta is Africa’s largest freshwater wetland, supposedly boasting one of the greatest concentrations of wildlife in Africa. Yet when we arrived there, the wildlife appeared to have taken a New Year’s holiday vacation. We saw almost none of the large game to which we had become accustomed — no elephants, no giraffes, and no lions. 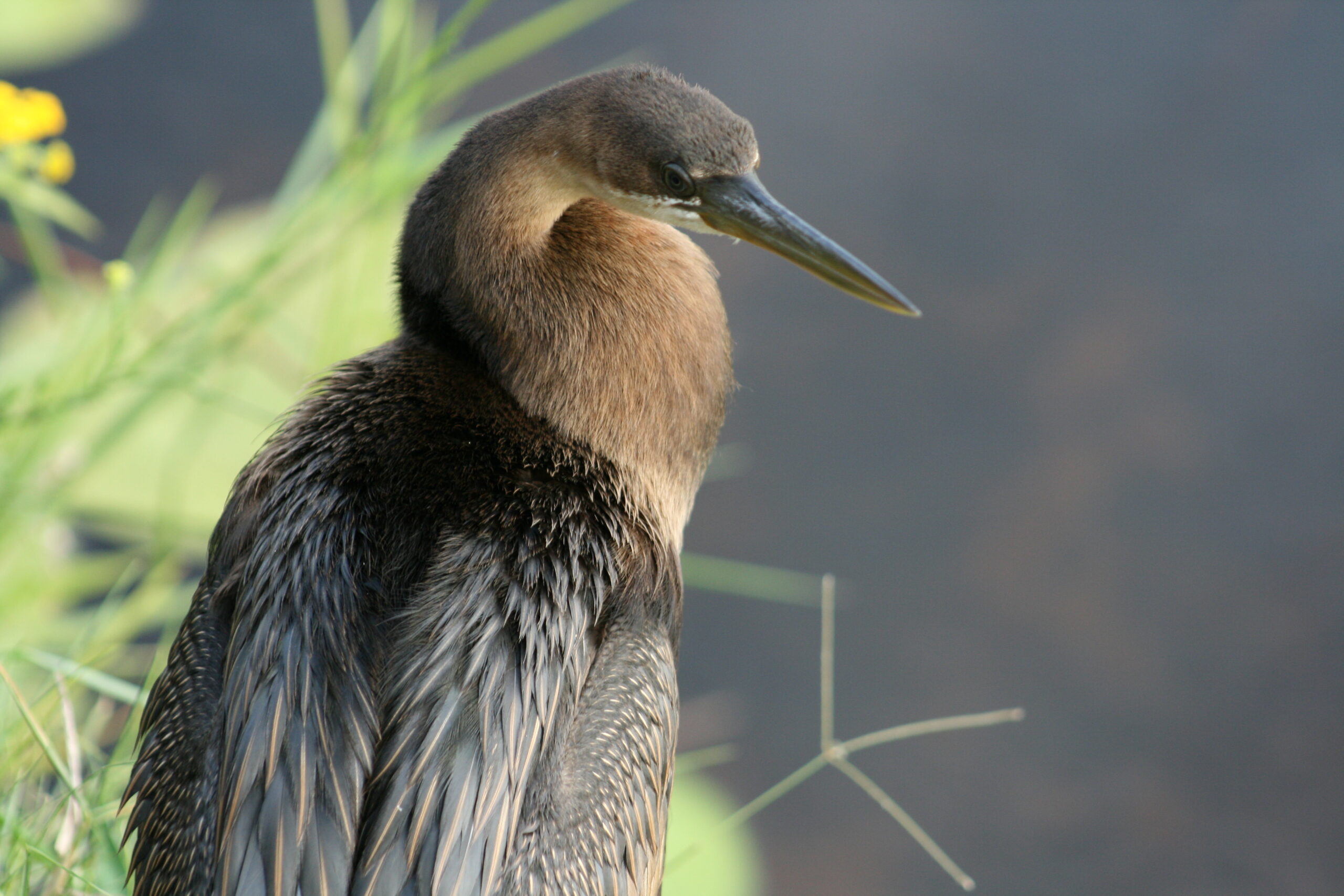 A Darter models for the camera

One morning, during a particularly quiet game drive, our guide Ronald received a message in Setswana on our Land Rover’s shortwave radio; he informed us that a leopard had been spotted about thirty minutes away. We knew that a single leopard would be difficult to find again, and we didn’t want to miss seeing him.

At our request, Ronald drove us to the leopard’s reported location, but we couldn’t spot the big cat. Ronald slowly followed the leopard’s fresh tracks in the sand for miles, and we knew we were right on his tail. Yet the unique terrain of the Bushveld, with its miles of leopard-obscuring landscape, made him impossible to see. Our eyes carefully searched every plant, every tree trunk, and every termite mound for any sign, but he continued to elude us.

We were frustrated, but during our search, we began to see wildlife we had never seen before. Without elephants and giraffes (and leopards) hoarding our attention, we found it easier to focus on Botswana’s smaller animals, like steenboks, baby warthogs, and the exquisite bird population. Soon, we became obsessed with capturing birds on camera mid-flight, an almost impossible feat without a tripod. We would curse birds perching motionless on trees; then we would curse them again when they flew away so quickly that they were only a blur in our telephoto zoom lens. 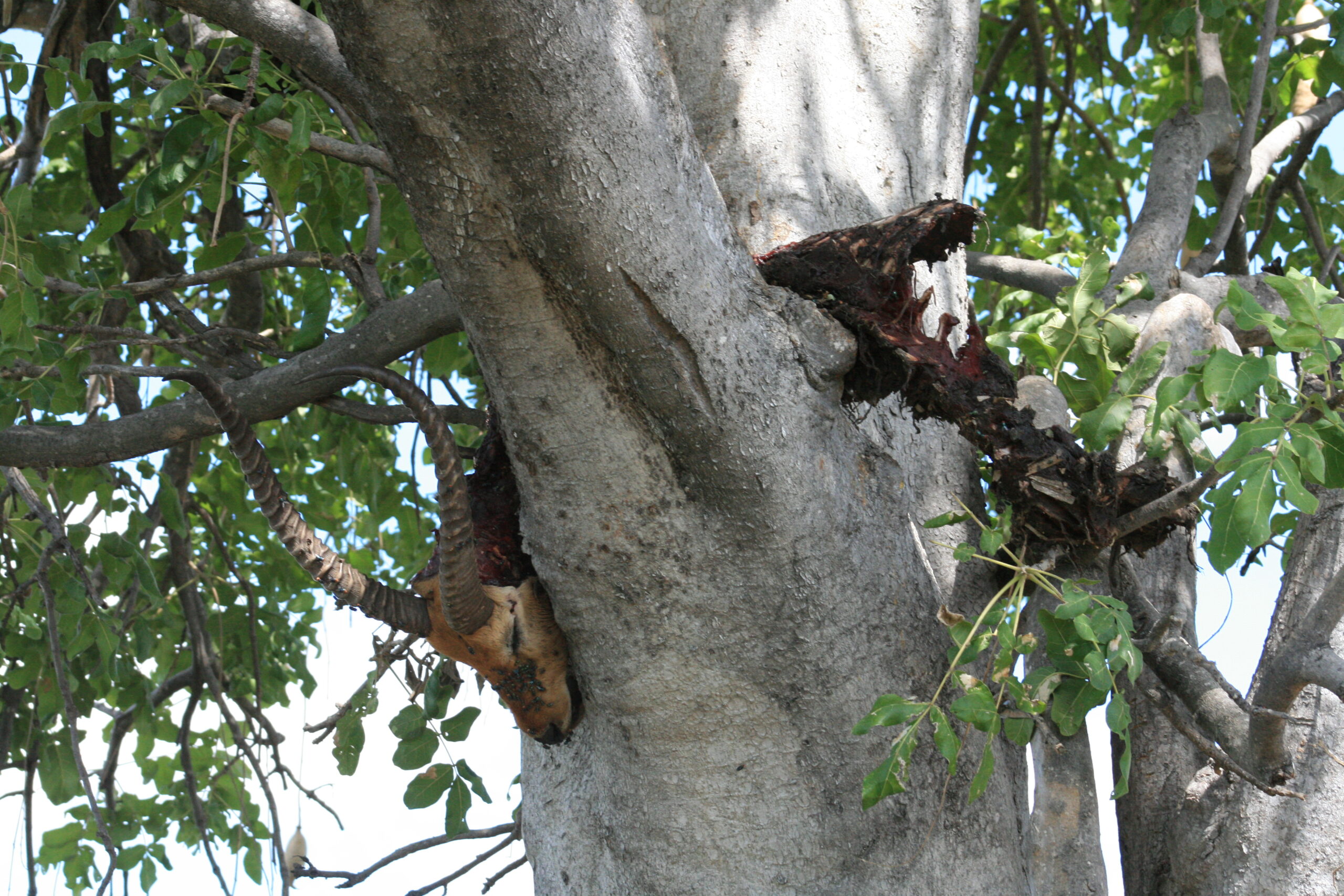 The remains of an impala sit in a tree thanks to a wily leopard.

For two full days, we stalked the lonely leopard through the wilderness, following his fresh tracks. He evaded us for so long that we started to suspect he was toying with us. Was he carefully trailing immediately behind our Land Rover out of our view, chuckling at our incompetence? Was he silently napping above our heads on the car’s canvas cover as we searched every grain of sand looking for a clue to his location? Did he also have a shortwave radio, enjoying our broadcasts, allowing him to know our whereabouts?

During that time, we took hundreds of photos of the Lilac-breasted Roller, Botswana’s colorful national bird; we joined the Cape Turtle Dove in its cooing of its traditional song (in the morning: “Work harder; work harder,” and in the evening: “Drink lager; drink lager”); and we sat in amazement as a Darter let us get within an arm’s distance, modeling for us as we took its picture.

Once, we thought we were close to spotting the leopard when we came across a gutted impala. The leopard had strewn blood and entrails everywhere and dragged part of the impala, including its head and horns, high onto a tree branch to protect his meal from bandits. We suspected the leopard was nearby, laughing at us as we inhaled the putrid stench of his decomposing lunch, but we didn’t see him.

By then, we didn’t mind. In Okavango, thanks to him, we discovered another Africa hidden underneath the first we had come to know — more subtle but equally fascinating. We just had to look a little harder.

On New Year’s Eve, the night before our return flight to the U.S., the Kwetsani camp staff treated us to a scrumptious foods-of-the-world feast. After the food, the staff sang a medley of traditional African chants and danced with overwhelming vigor. Their smiles were so big and their energy so infectious it was hard to deny the revitalizing medicine of the wide open spaces of Botswana.

Maybe that wily leopard sat next to our camp in the night shadows, just out of our view, watching us and enjoying the performance, but I doubt it. Probably, he just wanted to be alone in the wilderness.