Journey to the center of the Bohemian brew kettle

JULY 21, 2013 — Rich, Wendy, and I are driving past an enormous white orb with a blue sea dragon painted on it in Gmunden, Austria, near the border of South Bohemia, a region of the Czech Republic. We’ve spent the morning visiting Schloss Ort, a tiny, beautiful Austrian castle in the middle of Traunsee Lake, and, now, I’m in the car’s backseat, on the phone with a stern, middle-aged Czech woman.

“English. Does anyone there speak English?” I ask her. I’m trying to arrange for a private tour of Eggenberg, a microbrewery in ÄŒeský Krumlov, a small town 140 kilometers away.

“Uh, great! We’ll be there in two hours,” I say, having no idea that she’s telling me that no one at the brewery speaks English and there are no English tours. The only word that I can say in Czech is, “DÄ›kuji,” which means, “Thank you.” I say it and hang up the phone.

“Wow, arranging a last-minute tour of the beer breweries in South Bohemia is pretty much impossible if you don’t speak Czech,” I complain to Rich and Wendy. We’re in the final, two-day stretch of our central-European road trip, and I only devised our tour of Czech breweries as we were leaving our hotel in the morning. I’m doing my best to keep us entertained after my friend Lena’s sad departure from our trip. “If you see a cute, English-speaking Czech woman wearing a white jacket on the side of the road, offer her a ride and we’ll ask her everything the about the breweries here.” 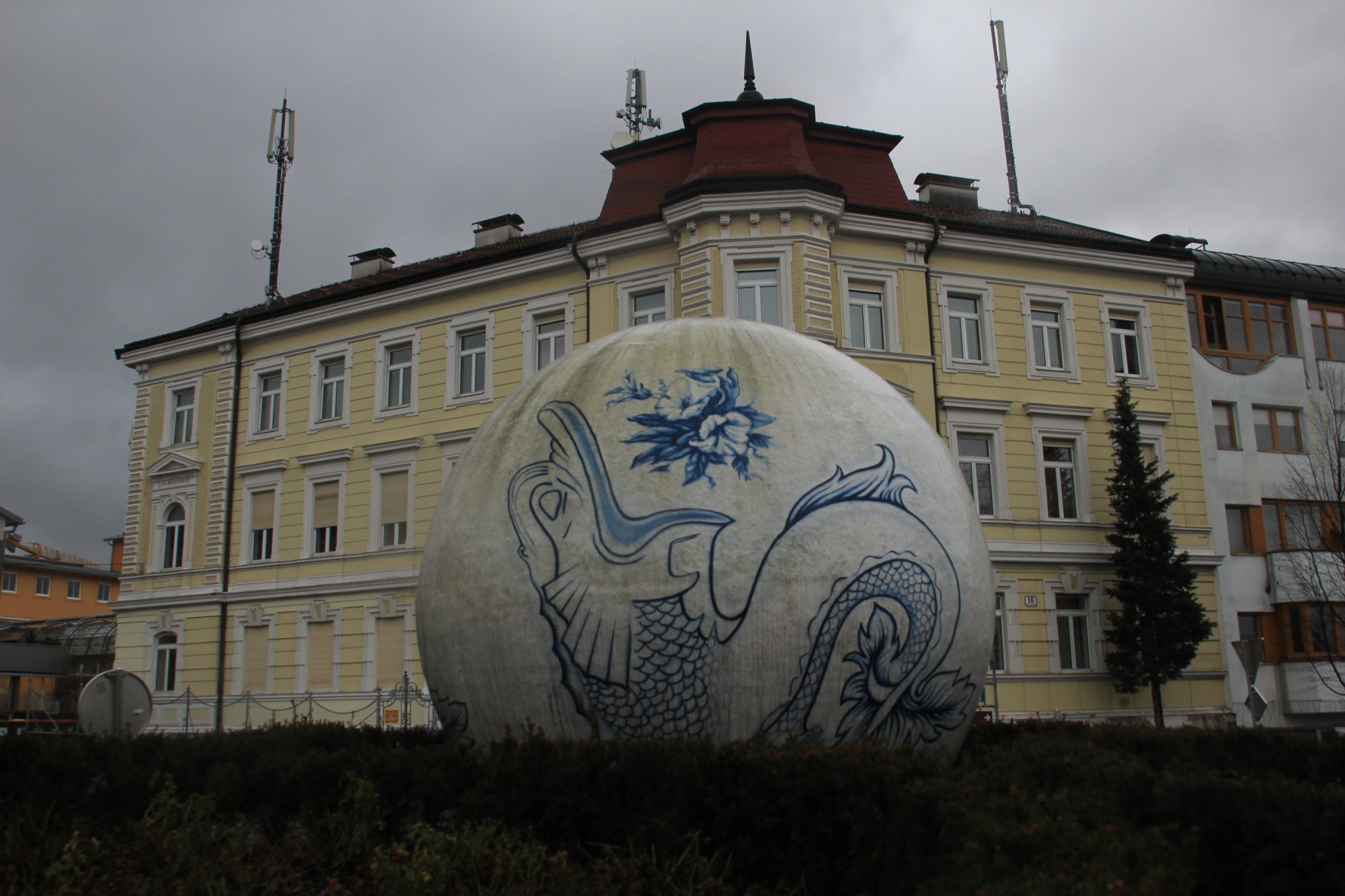 A dragon scupture sits at an intersection in Gmunden, Austria.

Nevertheless, without Czech assistance, we navigate the maze of narrow streets in the storybook town of ÄŒeský Krumlov and pull into the parking lot for the Eggenberg brewery. When I request a tour from the Czech woman with whom I spoke on the phone, who looks like she used to be Stalin’s wife, she yells, “Ne! Ne!” Clearly, the concept of friendly customer service still hasn’t made its way to the Eastern Bloc, I think. Fortunately, a young, English-speaking employee serendipitously wanders by and offers to show us around. As he leads us, to the chagrin of Stalin’s wife, through the front gate, he explains to us that almost all of the breweries in South Bohemia brew pilsners, a golden-colored beer named for Pilsen, the Czech city where the beer was brewed first in 1842. He leads us through the brewery’s impressive copper brew kettle room, which, he explains, is where malted barley (known as “wort”) is boiled with hops, herbs, and sugars to add flavor and bitterness to the beer. 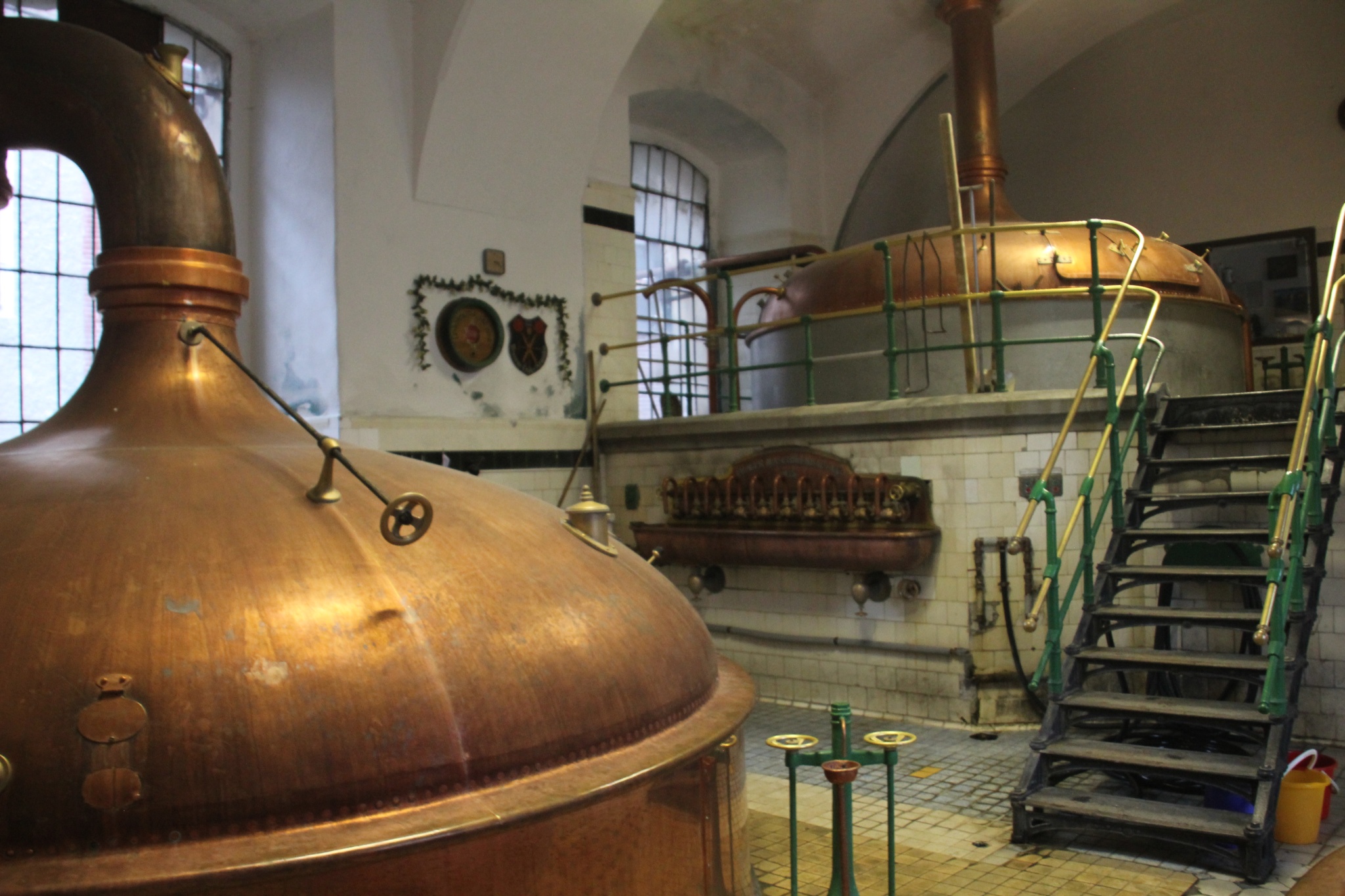 Afterward, we stroll through the town and stumble into a fantastic toy shop selling handmade, wooden mobiles, trucks, and trains. Then, we get in our car to drive toward ÄŒeské BudÄ›jovice, home of Budweiser Budvar, one of the country’s largest and most successful breweries, dating back to the 13th century. As Rich tries to navigate out of the town center, a Czech police officer stops us and approaches Rich’s window. In broken English, he tells Rich that he has driven into an illegal zone and demands that we pay 500 Czech Koruna (US $25) and sign a ticket, written completely in Czech, to continue our trip. While it’s true that we have unintentionally broken a traffic law, the situation feels like a shakedown. (I assume that when locals accidentally drive into the town’s center, they’re scolded and sent on their way.) Just as I’m wishing more than ever that a Czech-speaking version of Lena were accompanying us, Wendy begins to yell at the police officer.

“We won’t sign anything that we can’t understand!” Wendy yells. “You can’t make us do anything!” She’s nervous.

“Then you’ll all have to come to the police station with me,” says the officer.

Rich and I are silent, unsure of the best way to handle the situation. But, we know that fighting with the cop won’t help our case. Finally, though I’m reluctant to give in to what seems like extortion, I decide that it’s impossible for us to deny that we have legitimately broken the law.

“Just sign it and pay him,” I say. “I think it’s worth splitting $25 to avoid a trip to a Czech police station, and I doubt that signing that ticket will condemn us to a lifetime in prison.” So, Rich decides to sign the ticket and pay up. The officer courteously sends us on our way. There’s a part of me, though, that’s happy that Wendy put up a little fight. 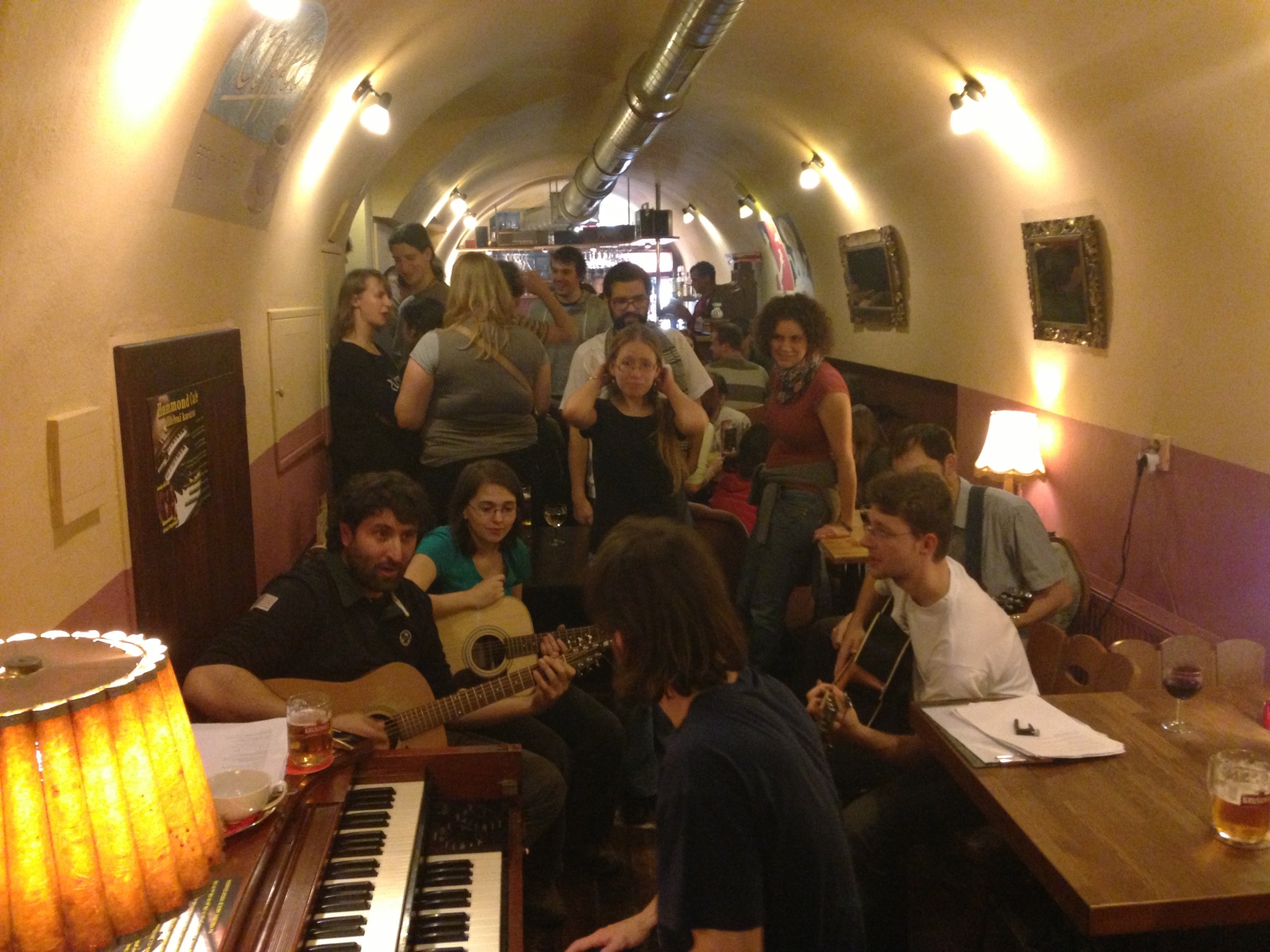 On our way to ÄŒeské BudÄ›jovice, I call the brewery that’s our next stop. Another stern, middle-aged Czech woman answers the phone.

“NE. NE. STOP. MUST WAIT,” she says. Then, a man with an important-sounding voice picks up the phone and says in perfect English, “How can I help you?”

“I’m visiting from California and I’d like to arrange for a tour of the brewery tomorrow,” I say.

“Uh, we just want to get an early-morning tour at 8 AM due to our busy trip schedule?”

“Yes, I will have my secretary arrange everything immediately.” Suddenly, it occurs to me that I’ve been somehow connected to the brewery president, ostensibly because he’s the only employee who speaks fluent English, and his secretary seems to have given him the impression that I’m very, very important. “My secretary will make sure that our best English-speaking guide meets you promptly in the morning, sir.”

We’re excited to get to ÄŒeské BudÄ›jovice, a supposedly vibrant Czech college town, but, when we arrive at night, the sidewalks are dead and most of the town’s restaurants and bars are closed. We eventually wander into the Hammond Café, a bar that, based on the patrons’ greasy-beards, long hair, and funky odors, seems like the off-campus socializing annex for physics, microbiology, and computer science students. Nevertheless, the dive has a lot of seating, a pleasant vibe, and good beer, and a band near the front of the bar treats us to a collection of Czech folk songs, performed by musicians on a piano and a few guitars. They also play a handful of covers of American rock, bluegrass, and folk songs. As we listen to classic American rock songs in the former Communist bloc, I find myself thinking about how small the world seems to be becoming. 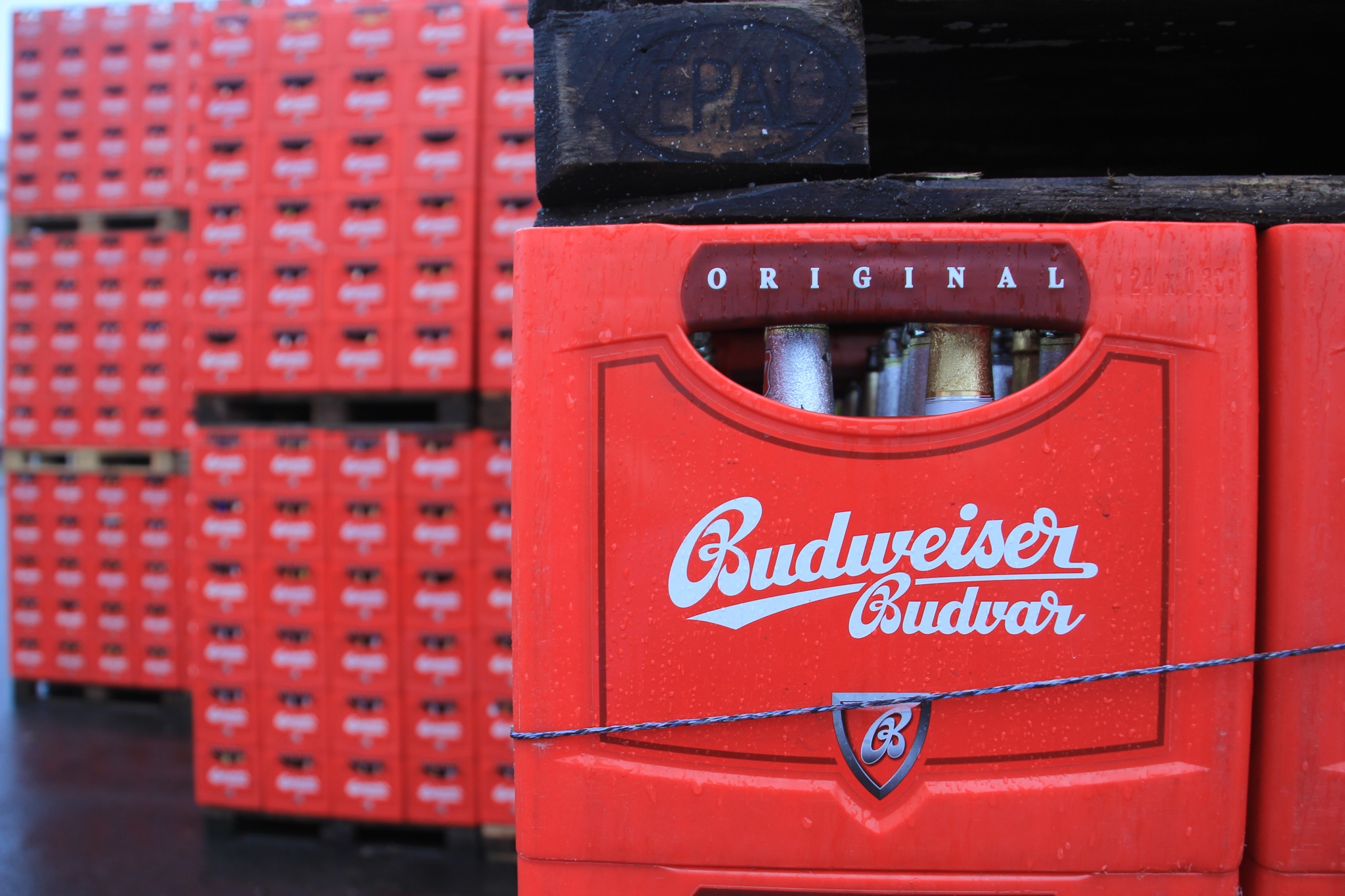 In the morning at the brewery, our tour guide, an astoundingly friendly Czech woman named Milada, tells us that she was a school teacher until the fall of the Soviet Union, after which she decided to teach herself (perfect) English. She ushers us into a small elevator with strange glass windows on the floor and walls. “See you soon,” she says. She winks.

Suddenly, the elevator makes an ominous buzzing sound followed by a lurching sound. Through the windows in the elevator, it looks like we’re descending at a rapid rate, through a dark rock tunnel, toward the center of the earth. I feel like we’re in the Czech version of an alcohol-centric Disneyland ride. After about a minute of descent, the elevator looks like it comes to a grinding halt in a deep pool of water. This water, a disembodied voice tells us, is the magic liquid that gives Budweiser Budvar’s beer its unique taste. Then, to the incongruous soundtrack of ethereal piano music, the elevator appears to shoot back to the surface. I’m starting to wonder about whether I accidentally ingested magic Czech mushrooms with the hard-boiled egg that I ate for breakfast. 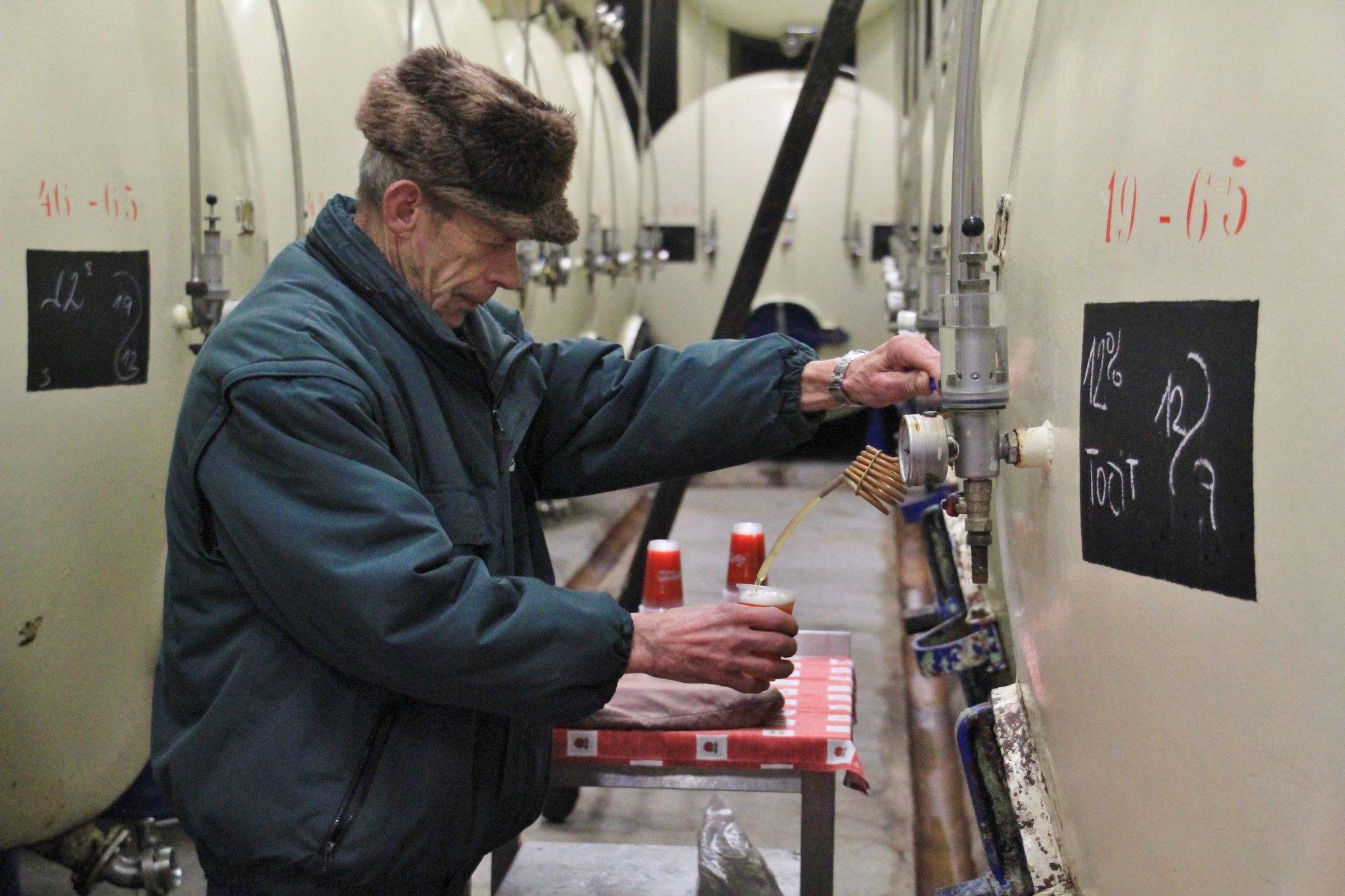 An employee pours a glass of beer at the Budweiser Budvar Brewery in ÄŒeské BudÄ›jovice, Czech Republic.

The elevator then spits us out into a labyrinth of strange museum exhibits, which are mostly beer-brewing scenes from throughout Czech history. Most of this is predictable corporate museum fare, but, near the end of the tour, the museum exhibits take an anti-American twist. We’re shown a bizarre, scripted propaganda film detailing the esoteric story of Budweiser Budvar’s ancient trademark dispute with American Anheuser-Busch over the Budweiser brand. The film centers on the story of a James Bond-like American spy who ruthlessly steals Czech beer-brewing secrets. For an American, the aesthetic here is baffling, because American companies usually work hard to hide their legal troubles from the public. But, clearly, former-Communist nationalism has gotten the better of Budweiser Budvar’s leadership. (Even more interesting, one exhibit concedes that the leadership of Budweiser Budvar officially licensed its brand to Anheuser-Busch in 1938 and then, well, changed their mind. Budweiser Budvar and Anheuser-Busch have been fighting in markets around the world ever since.) 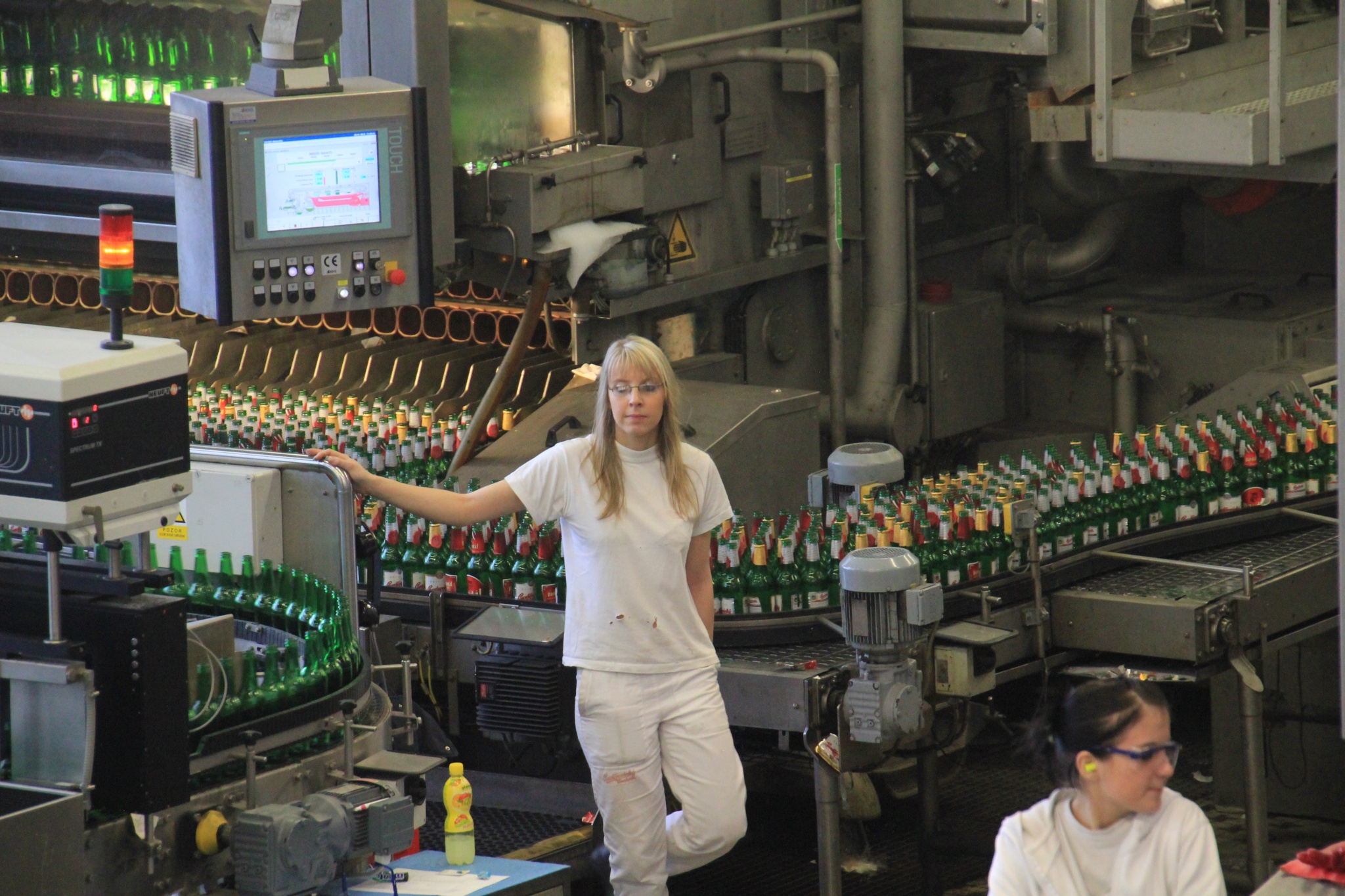 After the sermon on the evils of American, beer-brewing, intellectual property thieves, Milada then leads us on a fantastic tour through the brewery itself. We feel like we’re in a fantastic episode of Discovery’s How It’s Made. She shows us the 300-meter deep artesian wells where the brewery gets its water, the brew house filled with six copper kettles and the smell of fresh hops, the cylindrical fermentation tanks, and, finally, thousands of full beer bottles flying by us on conveyor belts. Milada also treats us to some freshly brewed beer. I can attest that there’s no chance that Anheuser-Busch successfully stole Budweiser Budvar’s beer recipe — the Czech brewery’s hoppy beer tastes much, much better.

After a quick look at the Bohemia Regent Brewery in TÅ™eboÅˆ and a stop to buy beer at the Poutník Brewery in PelhÅ™imov, we finally return to Prague, in time to catch our flights in the morning. When we walk into historic downtown Hotel Evropa on Wenceslas Square, almost all of the lights are off, and we feel a bit like we’re in Stanley Kubrick’s The Shining. The stern Czech woman in her sixties (is there any other kind?) manning the front desk seems unamused by my hardball negotiations for a room. Nevertheless, she accidentally underbids one of my offers, and we end up with an unbelievably good deal for a hotel and parking space in downtown Prague. We walk in the dark, up an epic, spiral staircase covered in aging red carpet, and into a huge, 3,000-square-foot, two-bedroom, two-bathroom suite that seems fit for a Bohemian king from the 1500s. We seem to be the only people in the hotel; apparently, hotels that feel like a trip into The Shining aren’t very popular during the off-season.

For our last Czech hurrah, before we turn in for the night, we decide to wander out of the hotel, hoping to relive our single favorite Czech experience. At the end of the street, we spot it: a man roasting a kebab of cinnamon- and sugar-covered dough over a hot bed of coals.

The three of us stand there, in the middle of Prague’s Wenceslas Square, savoring the delicious trdelniks like they’re the last ones that we’ll eat for the rest of our lives.

How to Take a Beer Brewery Tour in South Bohemia

OVERVIEW: With its 100 breweries strewn throughout the country, the Czech Republic is a beer lover’s paradise.

LOGISTICS: The easiest way to take this trip is by flying into Prague, renting a car, and taking a looping road trip through the country. It’s also possible to use trains and buses, though, obviously, your trip will run slower. Be sure to call every brewery that you plan to visit at least a few days in advance to confirm or arrange for English-speaking tours. Find a Czech-speaking friend to help you, because very few of the people answering brewery phones speak English.

ITINERARY: Our road trip included Prague, Germany’s Romantic Road, Salzburg, and the Austrian countryside before returning to the Czech Republic, but the following is a condensed brewery-tour itinerary that would work well based on our experience. (Note: “Pivovar” is the Czech word for brewery, which helps when searching for information on the Internet.)