FEBRUARY 22, 2013 — “It looks like if we go to Prague, we’re going to get our faces burned off,” says my friend Rich, a good-humored TV producer with a love for good food, beer, and indie music. We’ve just finished watching YouTube videos of New Year’s Eve fireworks celebrations in various European cities, trying to decide where we want to start our holiday European road trip.

“Well, then it’s decided!” announces Wendy, an adventure-seeking nursing student who also happens to be both a beer-lover and Rich’s wife. “In and out of Prague! Forever! No changes!”

We’ve been sitting in Rich and Wendy’s apartment in Burbank, California for ten hours straight trying to plan the trip, staring at a sliding door, which we’ve covered in colored index cards representing various European destinations and activities. Though we haven’t totally agreed on all of the details, we’re relieved to have finally settled on New Year’s Eve in Prague, even if the reason doesn’t make any sense. 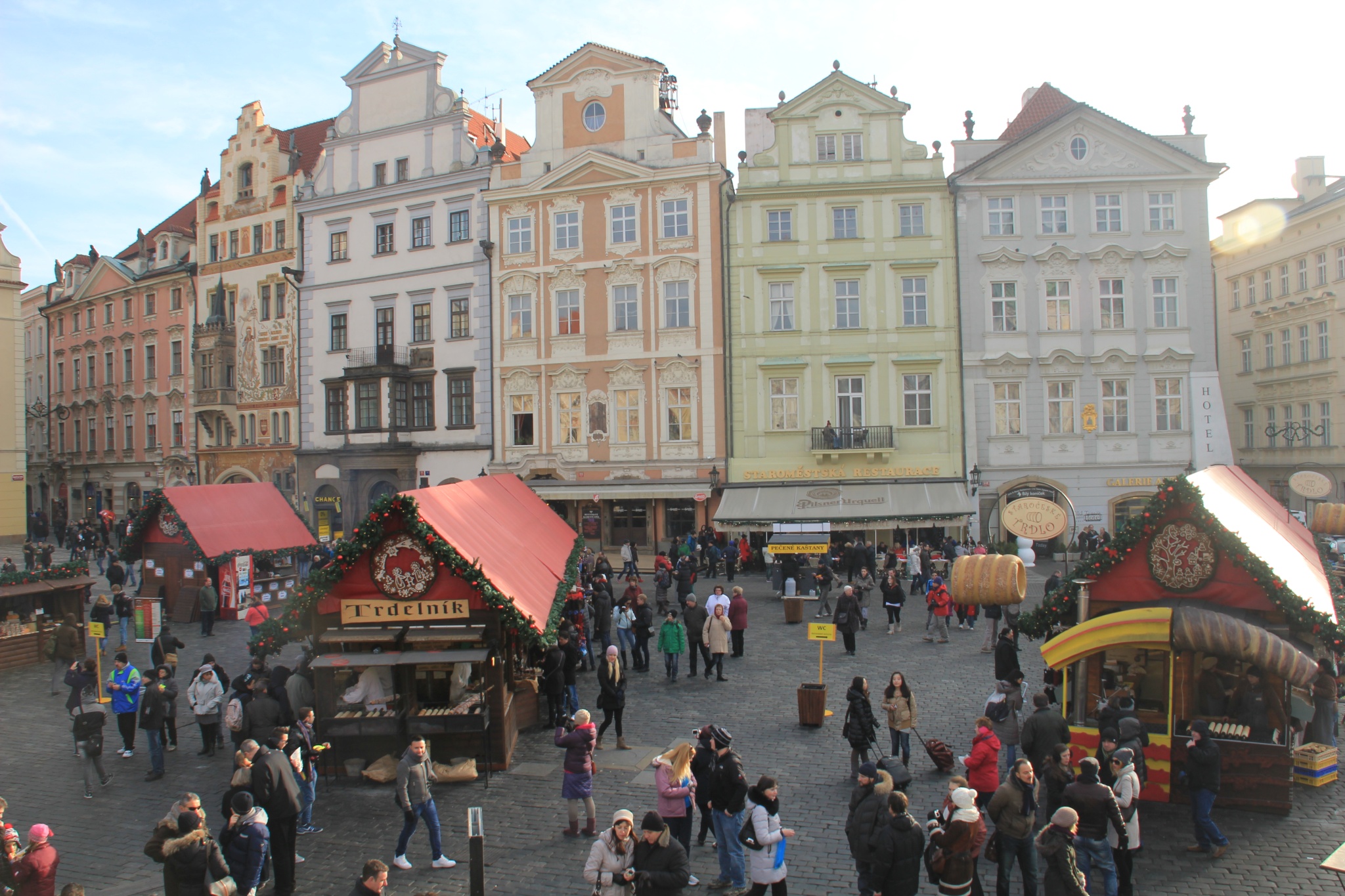 “I can’t wait to get my face burned off,” I say as we disband our grueling meeting.

Three weeks later, I land in Prague a day before Rich and Wendy arrive, because I’ve already been road tripping in Portugal for the past week. After checking into our hotel, I wander into nearby steakhouse La Casa Argentina, sit at the bar, and order a drink. Before I can take a sip, a small Russian woman named Yuliya asks me why I’m sitting at the bar myself. I tell her that I have no friends in Prague. Soon, I’m in a BMW with her and her Russian friends Max and Anya, heading to Bar and Books, a swish tavern. We spend a couple hours together, mostly discussing America’s strange fixation on guns (non-Americans find our Gun Thing to be nonsensical, probably correctly), until Max drops what, for me, is a bombshell. 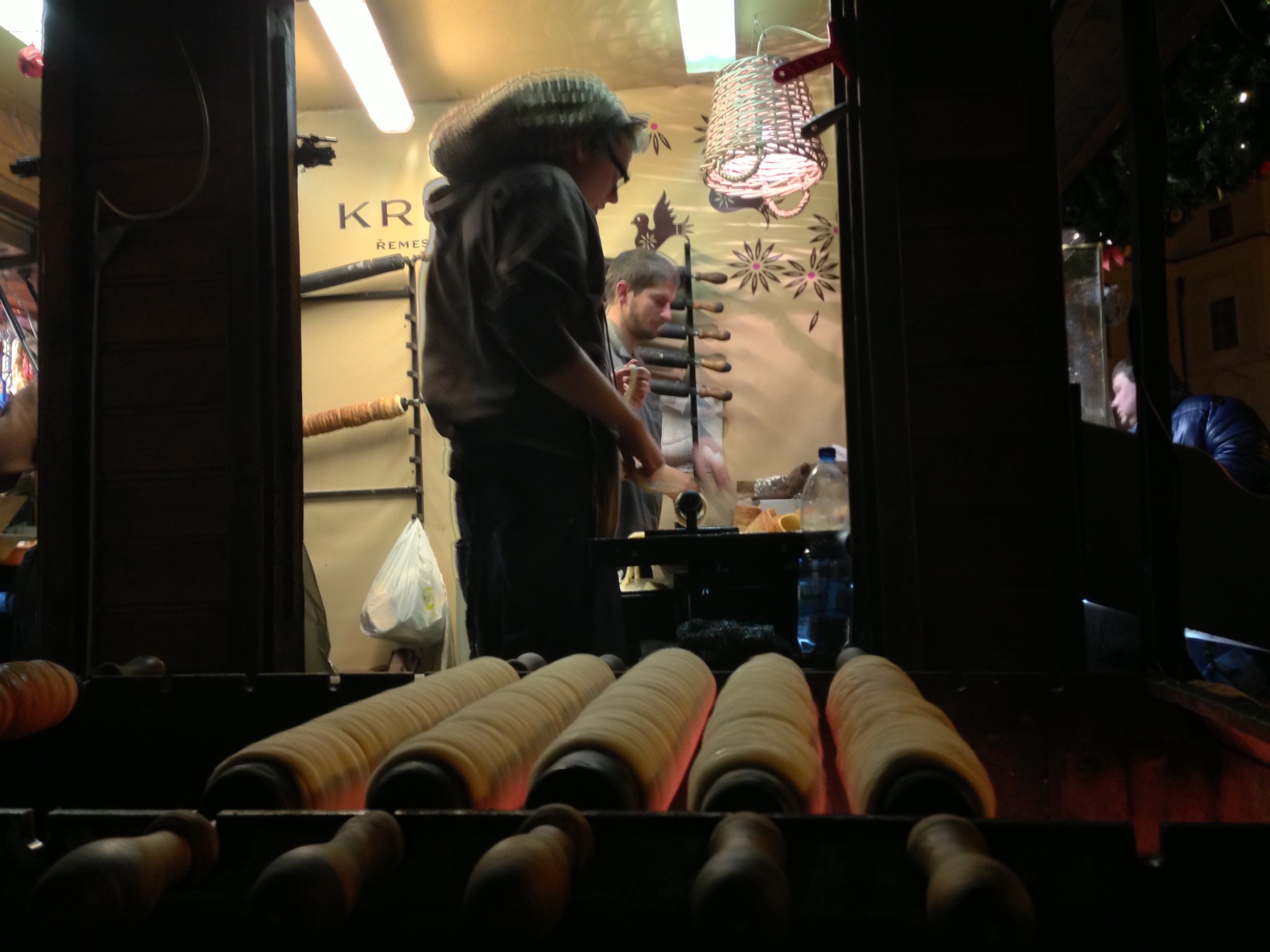 Trdelniks roast in the evening in Prague’s Old Town Square.

Rich and Wendy arrive the next day, which is New Year’s Eve. We start by sampling the local Pilsner at nearby pub Lokal and then grab dinner and some Brachokva, a traditional Czech liquor, at famous Prague brewpub U FlekÅ¯. With full stomachs, we walk to Old Town Square, which is decked-out for the New Year’s Eve celebration: there’s a huge Christmas tree, a big stage for music acts, a bunch of food vendors, and revelers anticipating the evening’s countdown. As we push our way into the crowded square, we find a booth selling trdelniks — tubular, donut-like pastries cooked over an open flame and covered in sugar, cinnamon, and almonds. We immediately order two. 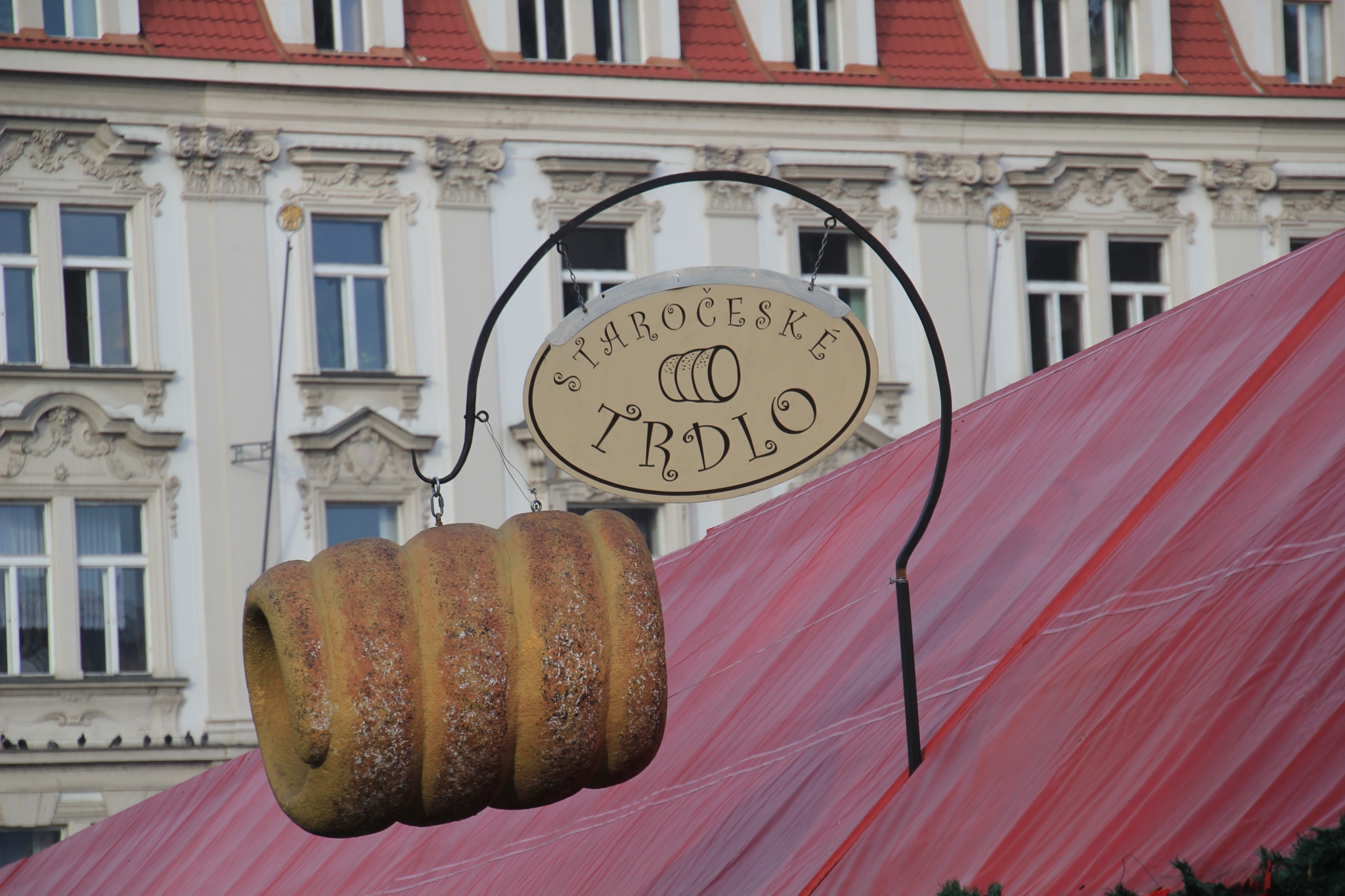 An enormous trdelnik hangs attached to a sign above a trdelnik vendor in Prague’s Old Town Square.

“HOW have we never eaten these before?!” I wonder aloud, as I gobble down the entire doughy, sugary goodness of my trdelnik.

“I want to eat all the things!” Wendy says, as she shoves the gooey, deliciousness of the trdelnik into her mouth.

“They’re like huge, Czech churros,” Rich notes as he wolfs down the sweet, luscious treat.

“Yes! Let’s start a business selling these at Disneyland and make millions!” I suggest. As we eat, we push our way through the dense crowd toward the stage, trying to get a good view of Cartonnage, one of the Czech Republic’s best-known electronic bands. Blond-haired lead singer Vanda Choco, wearing what looks like Seinfeld’s Puffy Shirt and playing a handheld piano, puts on a peculiar show, singing an apropos song about scrumptious pastries complete with sparse electronic beats, an “Mmm, mmm” chorus, and robot-like dancers. The whole thing feels a lot like Dieter’s Dance Party from Saturday Night Live circa 1990 (thanks, Mike Meyers). 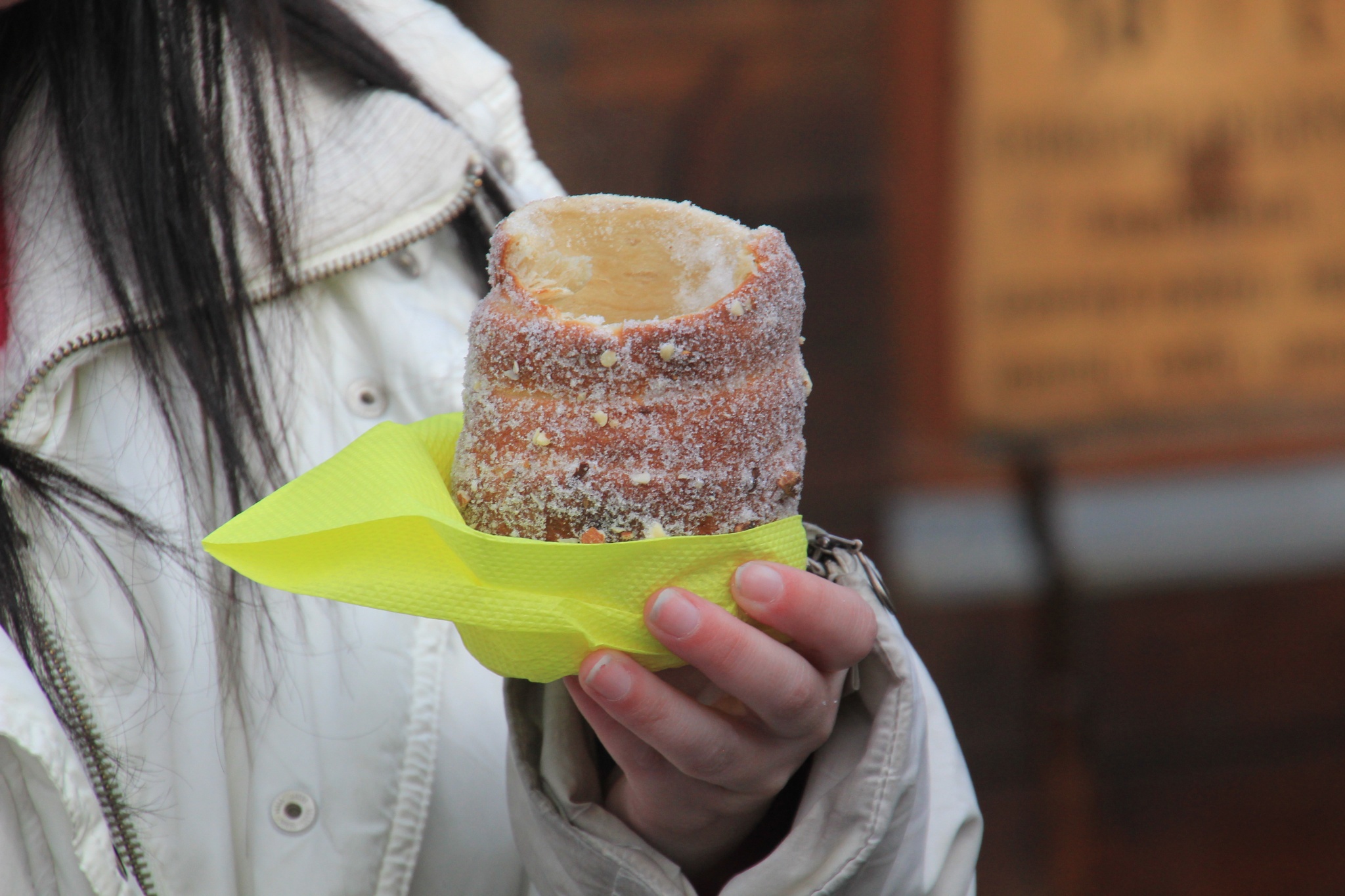 A woman in a white jacket eats a trdelnik in Prague’s Old Town Square.

“Ugh,” Rich says. “How much longer until we get our faces burned off?!” Rich asks.

“We must eat more sugary, Czechy churro pretzels,” Wendy demands. There’s no argument. We begin pushing our way back out of the horde, this time passing two dirty-blond, 20-something Czech women with enormous, turquoise eyes, slender faces, and matching white, fur-trimmed jackets. One of them locks eyes with me and seems to be mentally undressing me as I pass. I’m (easily) distracted until Wendy yells from in front of me: “Hurry! It looks like this Czech churro pretzel stand is closing!” I quickly break eye contact with the pretty Czech girl and rush to the trdelnik stand, but, to our intense disappointment, it has already closed. The three of us look around desperately until we spot another booth, still open. We run toward it — in what feels like a Czech-pastry-themed Chariots of Fire spoof — arriving just in time to get the last sticky, mouthwatering trdelniks before closing time. 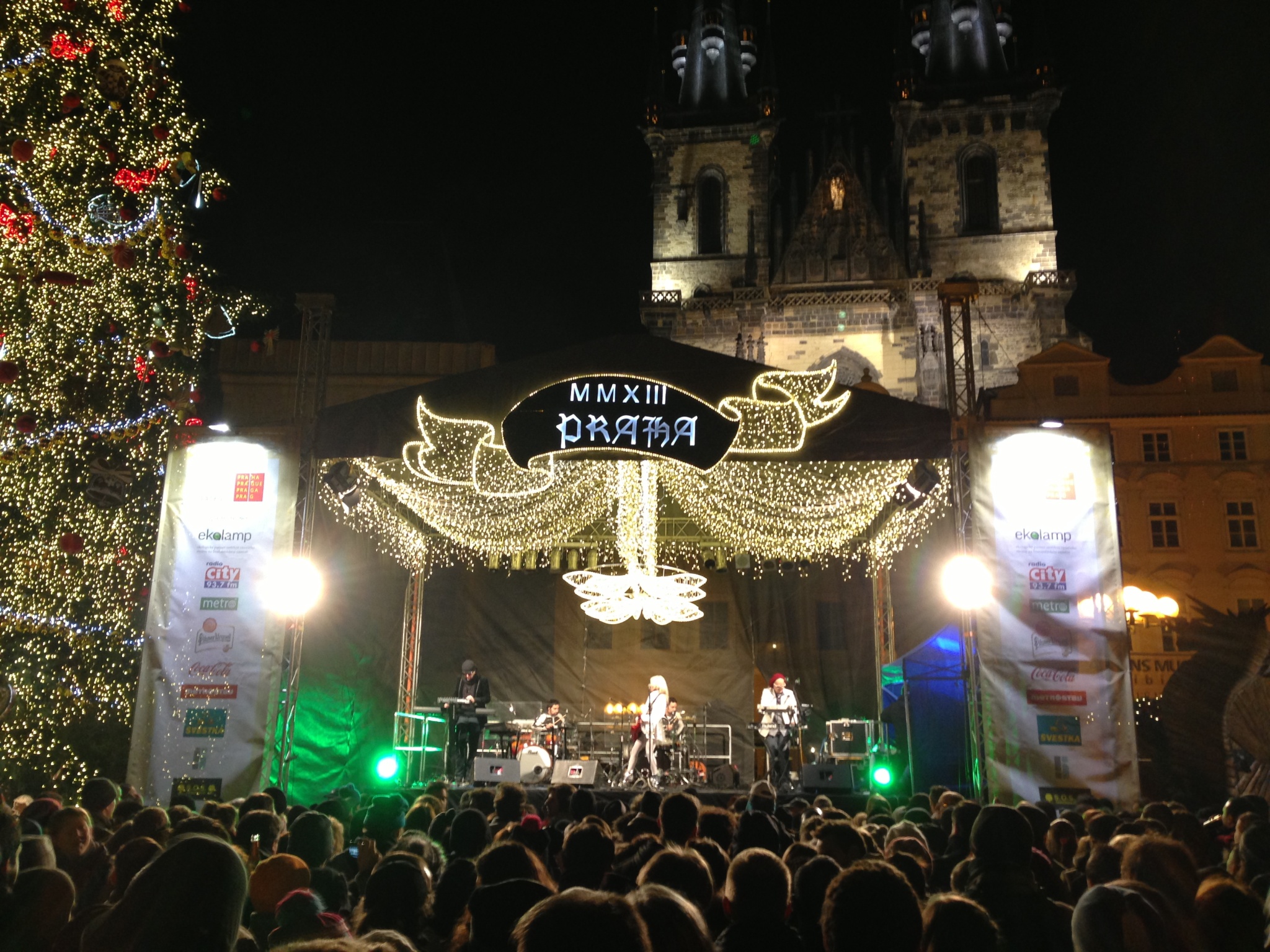 Cartonnage, one of the Czech Republic’s most well-known electronic bands, plays in Prague’s Old Town Square on New Year’s Eve.

As we scarf down the cinnamony, scrumptious, dessert, I tell Rich and Wendy about the White Jacket Girl Who Undressed Me in Her Head, insisting that it’s essential that we find her again. “You know, so that we can have a local, Czech-speaking tour guide,” I explain. Showing little interest, they suggest that I find her myself and offer her a piece of my heavenly, delectable confectionary when I do. I walk with resolve back into enormous mass of people, but after spending 20 minutes searching the concert audience systematically but futilely, like a dedicated process server delivering a summons to a criminal who has fled the country, I sheepishly return to Rich and Wendy. 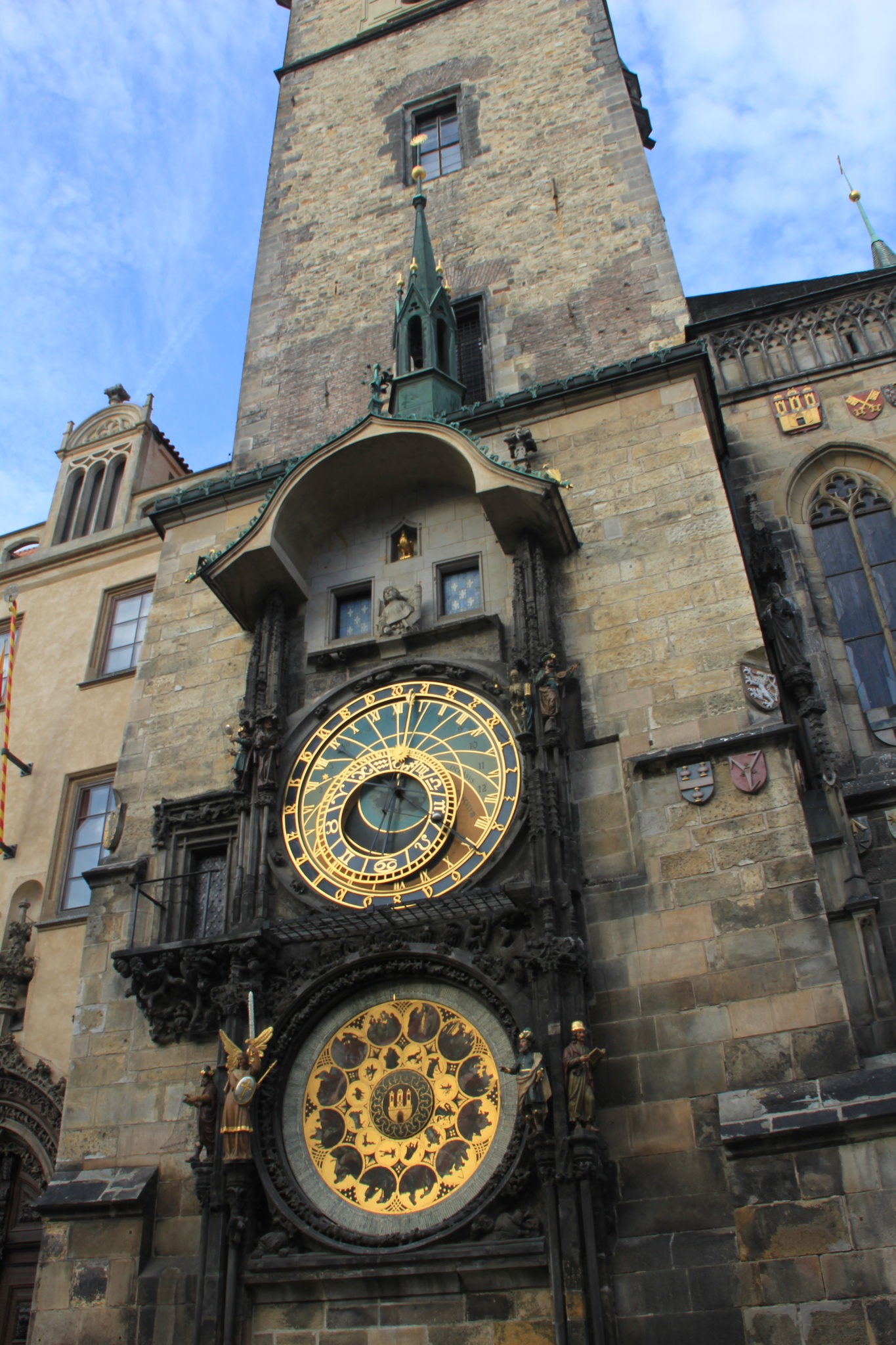 “Oh well,” says Wendy. “She’s about to get her face burned off anyway.” Meanwhile, Vanda Choco continues to whine on stage as we watch.

“Maybe the headliner — the drag queen cover band — will be more entertaining than Czech Moby,” I say. But, when the drag queens finally take the stage, the three of us begin to question the sanity (or at least the taste) of the Czech New Year’s Eve music act booker.

“Please,” Rich pleads. “Let’s get out of here and run to the river to watch the fireworks from there. The White Jacket Girls definitely went there. I can’t take another minute of this Czech music festival.” The three of us argue about the wisdom of this idea for a few minutes, but, as the drag queens launch into a lip-synced, amateur rendition of Boney M’s “Gotta Go Home,” the act becomes so grating and intolerable that our discussion becomes moot.

“Look, there’s two girls in white jackets over there!” Wendy says, trying to get us moving. We turn around and start trying to walk toward the river, but the mass of people is so impenetrable that it takes us ten minutes to move 50 feet of the third of a mile walk to Charles Bridge. Near the Prague Astronomical Clock, a few minutes before the final countdown, we become completely trapped in the jam-packed throng. 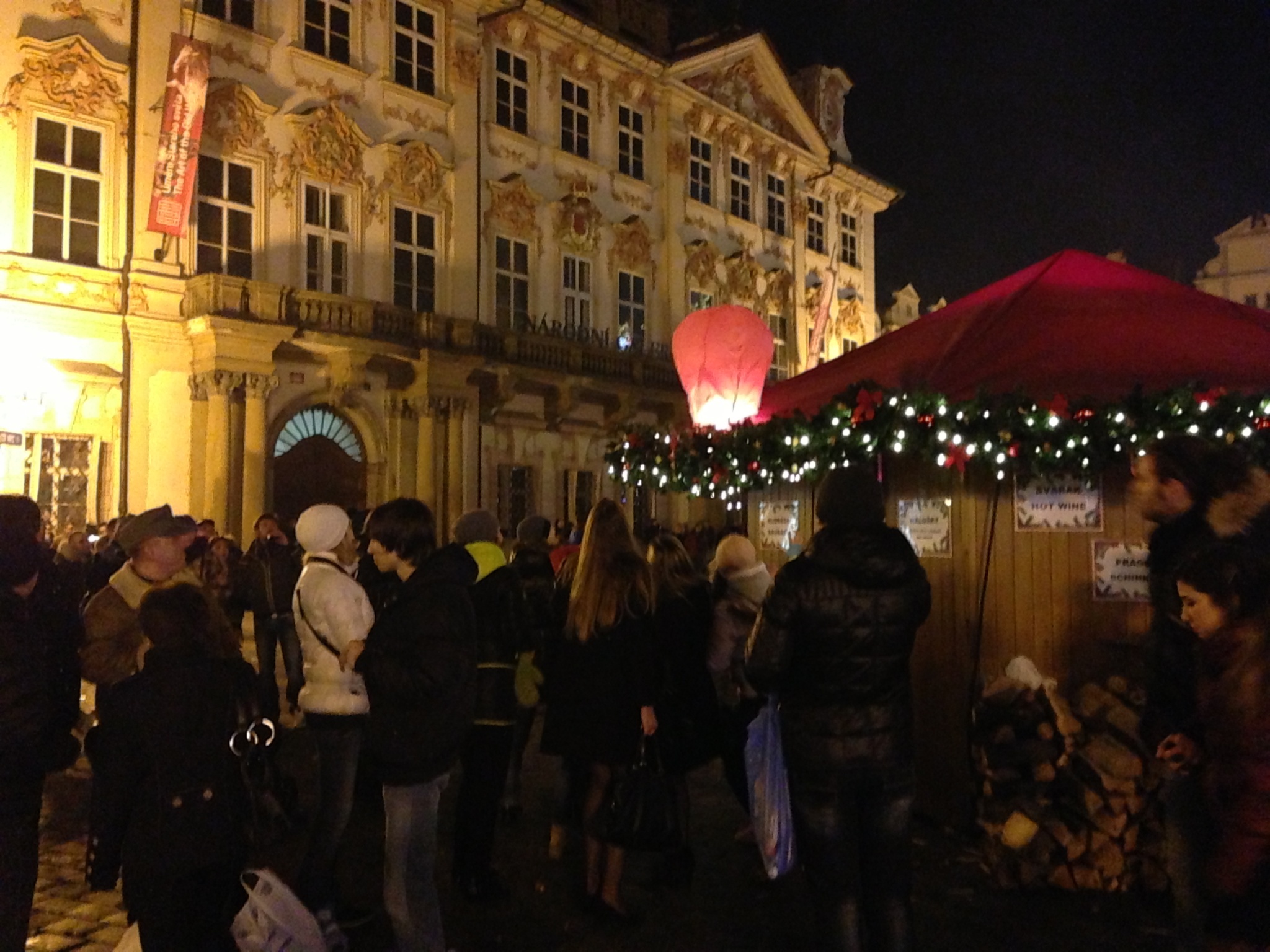 “TÅ™i… dvÄ›… jedna… ŠÅ¥astný Nový Rok!” yells the crowd at midnight. Suddenly, people all around us ignite and shoot fireworks. A man launches a huge, flaming aerial rocket — the kind used mostly in professional fireworks shows in the US — right next to Rich’s head. It flies less than a foot from his face and into the sky.

“Shit! Shit! No, seriously, we’re going to get our faces burned off!” Rich says. Meanwhile, while I’m trying to participate in a New Year’s Eve Skype video call with a good friend in Los Angeles, a man next to me sprays half of a shaken-up champagne bottle directly into my face. My friend in Los Angeles doesn’t see any of this, of course, because the huge number of people in the Square have overloaded Vodafone Prague’s closest cell tower, ending my Skype call. Or, maybe one of the Fireworks of Death has destroyed it, I think. We can barely move because the area is so packed with people, but we start inching away from the Fireworks Grim Reaper, walking through an obstacle course of broken glass and large piles of trash. 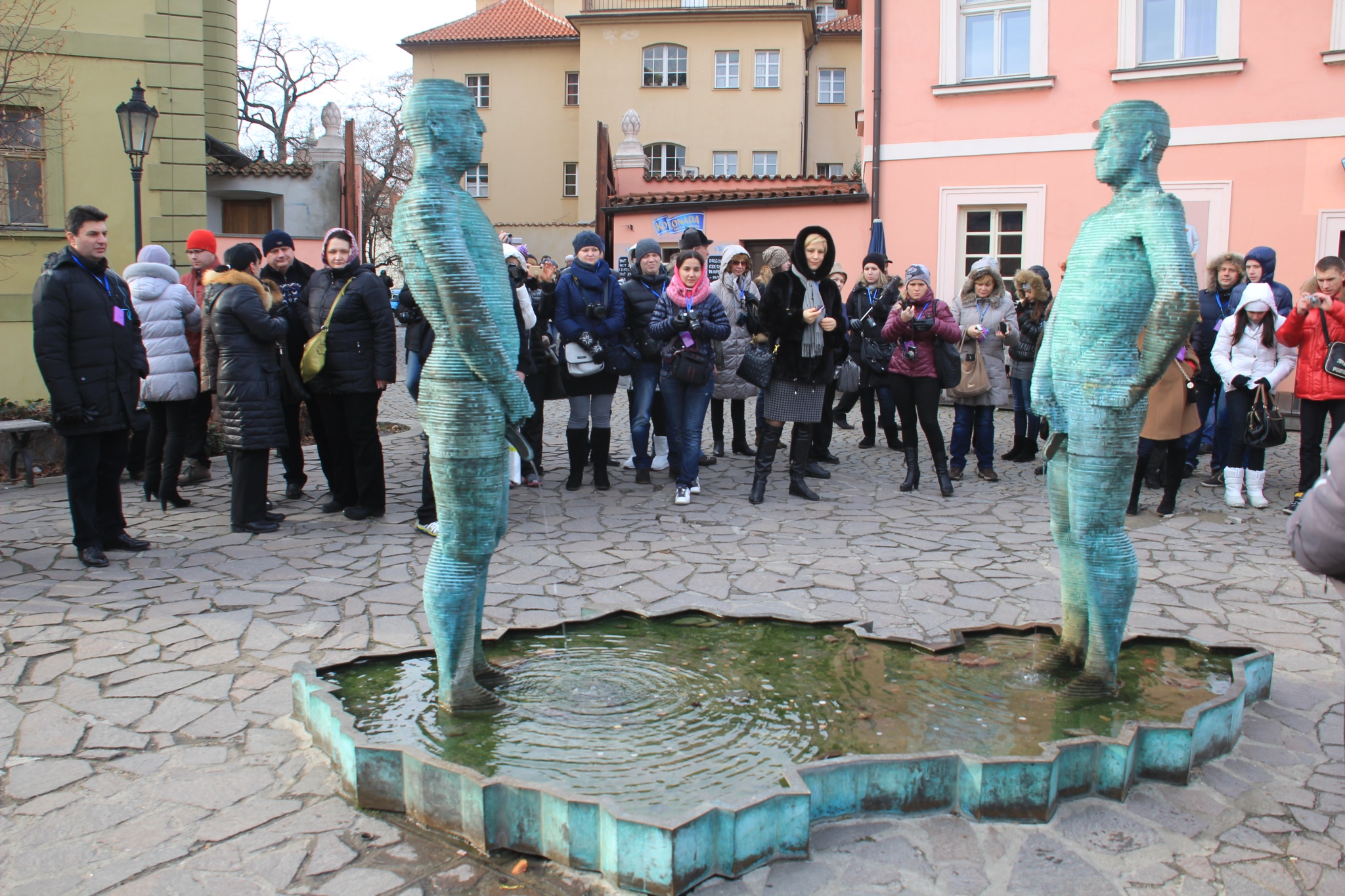 “Look, that Czech fireman is just watching the war zone from above,” Wendy says. “I guess he’ll only take action if someone tries to fire a nuclear weapon.”

“Look, that Chinese sky lantern is about to land on that booth’s awning and set it on fire!” I notice.

“We’re going to die out here,” Rich mumbles, as a group of Czech teenagers just a couple feet away fires bottle rockets into the air. But, making anticlimax number three, we don’t. Sorry.

We eventually make it back to our hotel alive, and the next evening, we venture out just before 7 PM to visit neighborhood brewpub Pivovarský DÅ¯m. On our way, we find ourselves trapped, yet again, on a street filled with hundreds people walking toward the Vltava River. To our amazement, a restaurant hostess tells us that there will be yet another, post-New-Year’s-Eve fireworks show happening — in five minutes. This time, the three of us start sprinting toward the River, running past tens of women in fur-trimmed, white jackets (apparently it’s a Czech fashion thing), hoping, this time, to see a professionally-planned show. As we run, a grand orchestral score starts booming from somewhere in front of us for the fireworks choreography. It’s the fireworks-themed sequel to Czech-pastry-themed Chariots of Fire. 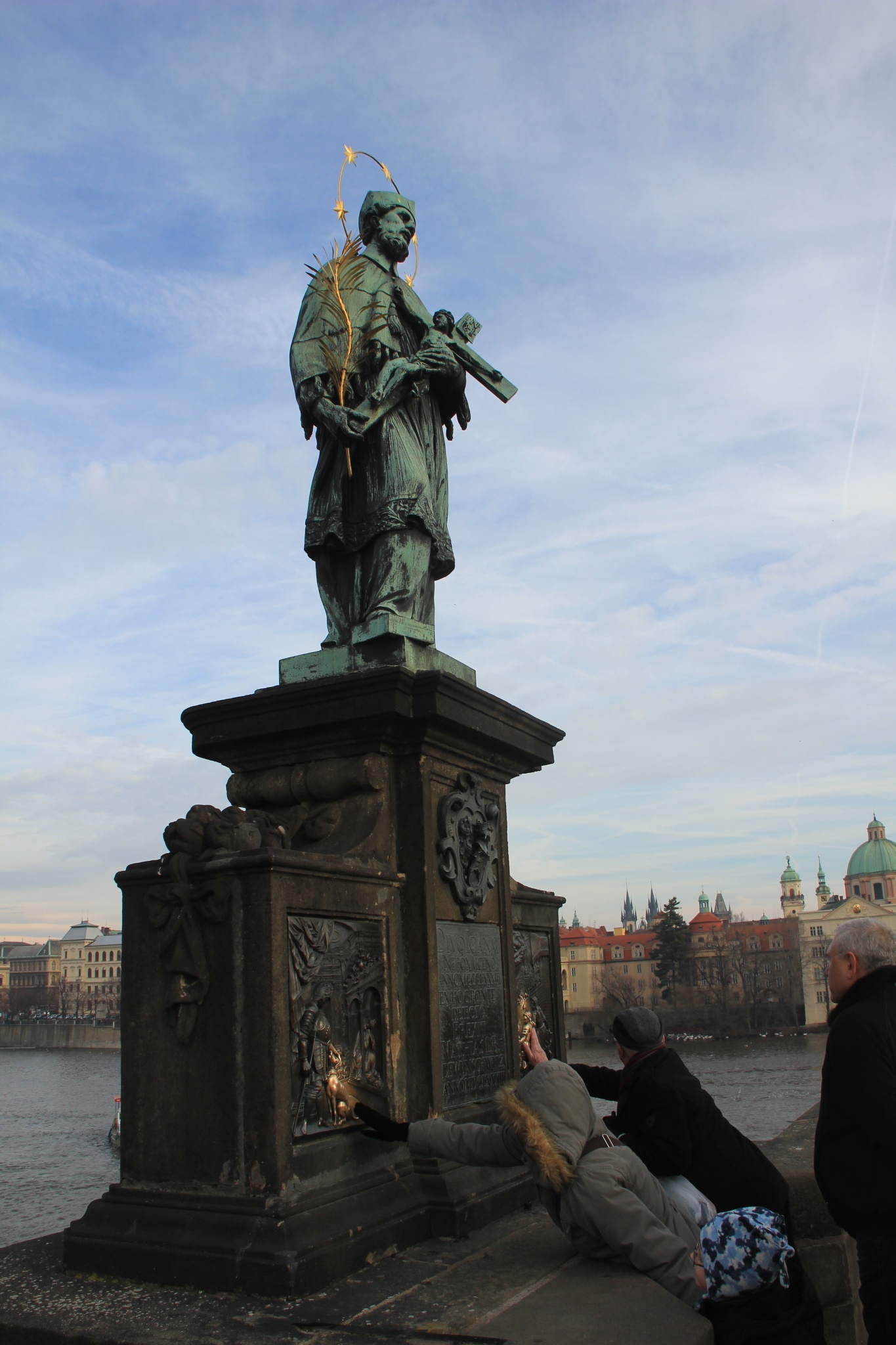 When we reach the river’s edge, we again become imprisoned in the mob, some of whom are again shooting fireworks haphazardly into the sky. We watch the show, and when it ends, we meet two Czech university students named Lenka and Karina at the pub. We enthusiastically tell them about our fireworks experiences.

“What is the deal with fireworks here? Are there crazy fireworks shows in the Czech Republic every night of the year?” Wendy asks the women, jokingly.

“And are there absolutely no fireworks laws?! In Old Town Square last night, Rich almost got shot in the face!” I add.

“Yeah, there are fireworks here all the time: for holidays, your birthday, or whatever,” Lenka says, deadpan. “But, I would never, ever go to Old Town Square on New Year’s Eve. Yeah, you’ll get your face burned off.”