APRIL 9, 2012 — “I don’t think you should go wandering around by yourself,” whispers Hanaa, our tour guide, as we ride on a tour bus through Cairo. “Someone might think that you’re an American spy.” I roll my eyes. This, of course, is why I don’t like guided tours. Most guides seem hell-bent on making sure that travel experiences are as insular as possible, which makes for the opposite of an ideal trip.

It’s December of 2011, ten months after former Egyptian President Hosni Mubarak’s resignation as a result of the Arab Spring protests, and I’m back in Egypt. This time, instead of backpacking with my friend Quinn, I’m on a Nile River cruise trip with my mom, brother Brian, and a tour guide named Hanaa. Since Quinn and I spent ten days traveling in Egypt by ourselves in March, only a month after Mubarak’s resignation, Hanaa’s suggestion that it’s too dangerous to visit some of Cairo’s tourist sites now on our own doesn’t seem credible to me. 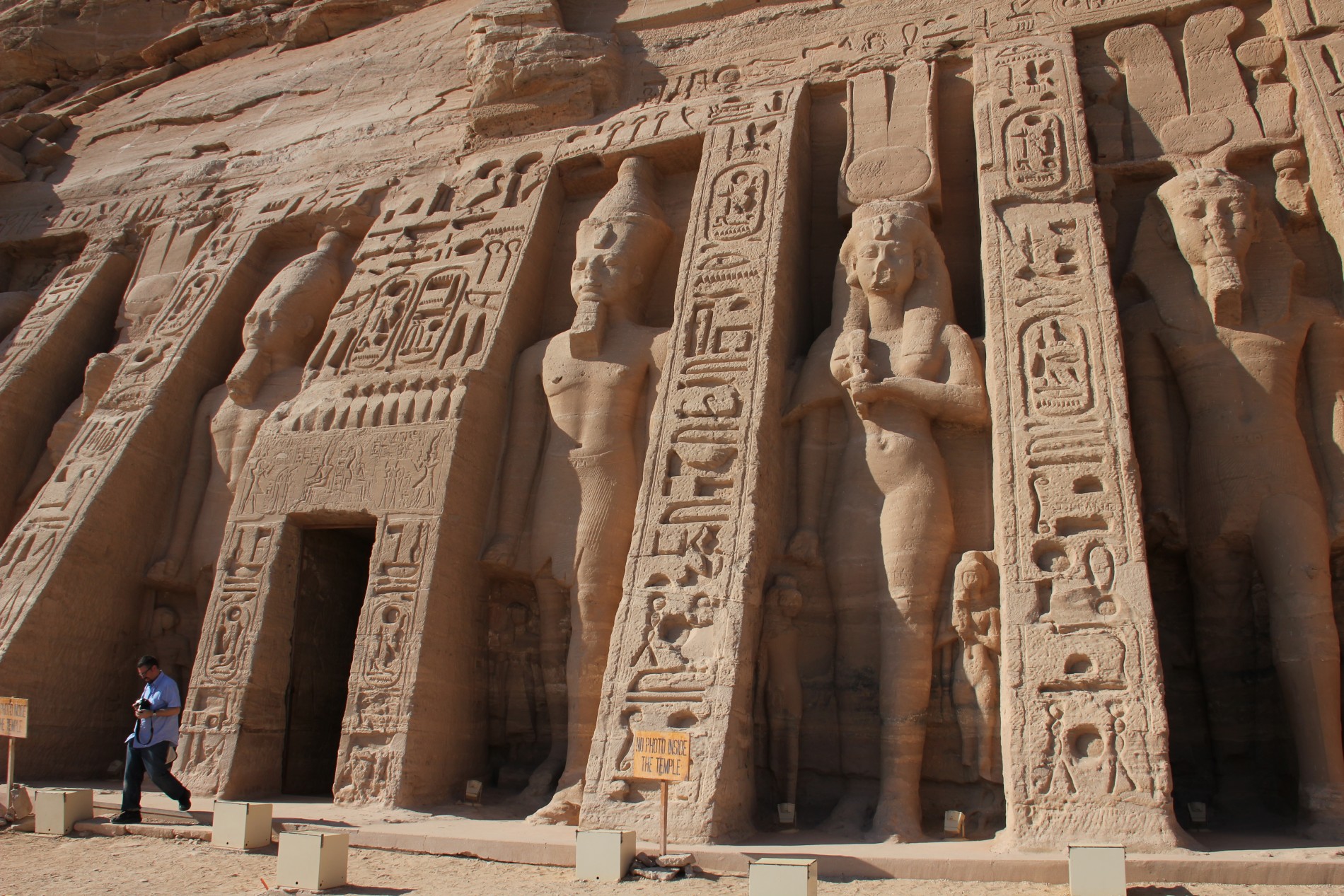 Colossi of Nefertari and Ramesses II flank the entrance to the Small Temple of Hathor and Nefertari at Abu Simbel.

When we see our bus drive past Al-Azhar Mosque in Islamic Cairo — a mosque that I didn’t get a chance to visit on my last visit — my brother yells to the driver that we want to get off the bus to explore by ourselves. Before Hanaa can object further, we’ve escaped the tour group, and I’m leading us down the street toward Al-Azhar. As we walk by a market, an Egyptian man approaches us, says that his name is Achmed, and asks if we need directions. After he points us toward Al-Azhar, he asks about our trip, and he’s surprised to learn that this is my second visit to Egypt this year.

“Yes, I’ve been reading the news,” thinking of the ongoing protests against the country’s military rulers and worries that the transitional government will end up leading to one run by former President Mubarak’s cronies. “Who did you vote for in the parliamentary election?” I ask, referring to the recent election meant to create a new parliament to replace the one previously dissolved after Mubarak’s resignation. 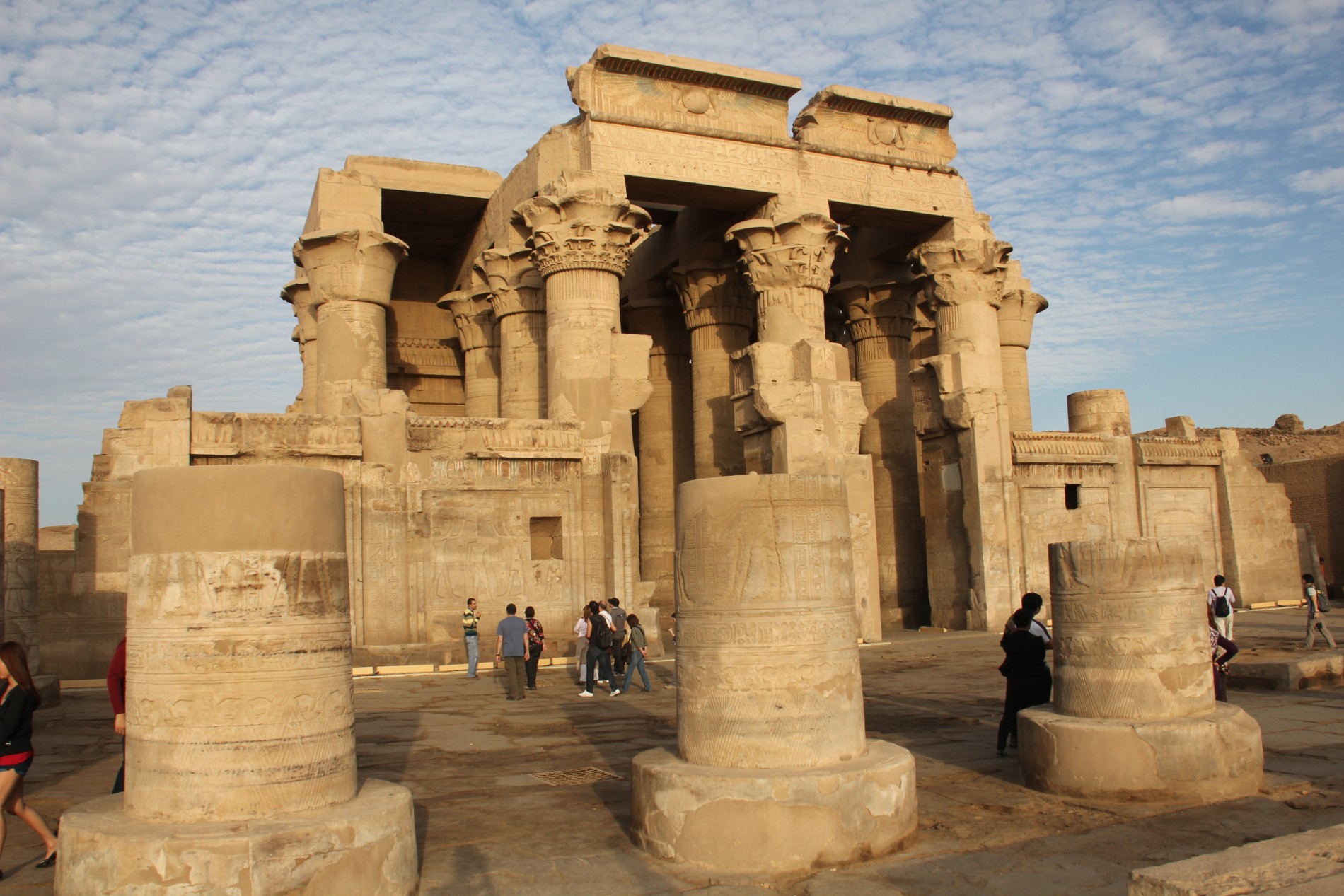 Tourists explore the Temple of Kom Ombo in Kom Ombo, Egypt near Aswan.

“Are you a journalist?” he asks. He’s the first Egyptian who I’ve met who has seemed suspicious of me, and I sense that Egyptian feelings toward Americans have become more negative since my post-revolution visit earlier in the year. But, when I tell him that I’m just a tourist, he relaxes.

“I voted for Freedom and Justice,” he says, referring to the political party affiliated with the Muslim Brotherhood, a conservative Islamic group with ties to the Egyptian military that some assume will champion an Islamic government in Egypt. The party won the election. Since Achmed is a young man in his late twenties, I’m surprised. I expected him to tell me that he voted for one of the newer liberal parties, like the “Egyptian Bloc” or “The Revolution Continues Alliance,” a political party that I think I might vote for on a US ballot just for its name. 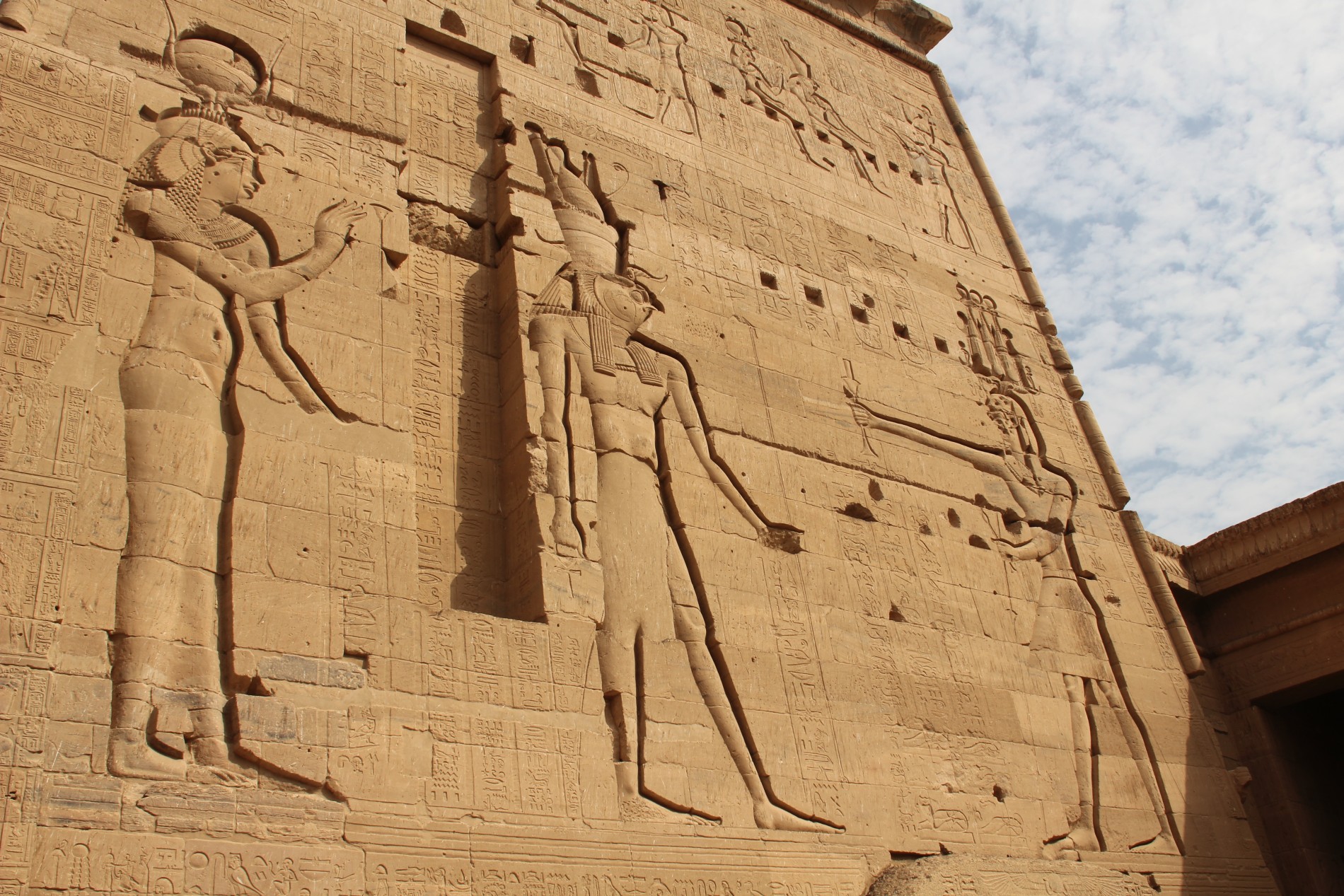 Carvings of Isis, Horus, and Osiris appear on the First Pylon of the Temple of Isis on Philae Island, Egypt.

“I’m surprised,” I admit. “Do you agree with their politics?”

“Not really,” he explains, “But there aren’t any other people that I think can be trusted. The revolutionaries are not very famous and don’t have much power. No one knows what will happen if they are elected.”

“That’s interesting,” I say. “Do you still go to protest in Tahrir Square?”

“Sometimes on Fridays,” he replies, a little sheepishly.

When I was in Egypt earlier in the year, the people I met seemed so hopeful and excited for Egypt’s chance to have new, democratically elected leaders who might prioritize citizens’ interests. When I realize that the hope seems to have dissolved, or at least diminished, I feel disappointed.

When I look at Achmed, he looks even more disappointed than me.

The next day, we leave for a boat cruise up the Nile River, setting sail for Aswan from Luxor. During the trip, we’re treated to stops at many sites in the Theban Necropolis and the temples of Dandara, Karnak, Luxor, Al-Deir Al-Bahari, Medinet Habu, Edfu, Kom Ombo, and Philae. This grand tour of ancient Egyptian history enchants all of us, as we marvel at Karnak’s grandeur, the Medient Habu’s brilliant and earthy blue, green and gold paint colors, Edfu’s lavishly-carved pictorials of the fight between Egyptian gods Horus and Seth, and Philae’s picturesque island setting. Yet, I admit that, by the time we arrive at the dramatic Abu Simbel, we’re all suffering from temple fatigue. 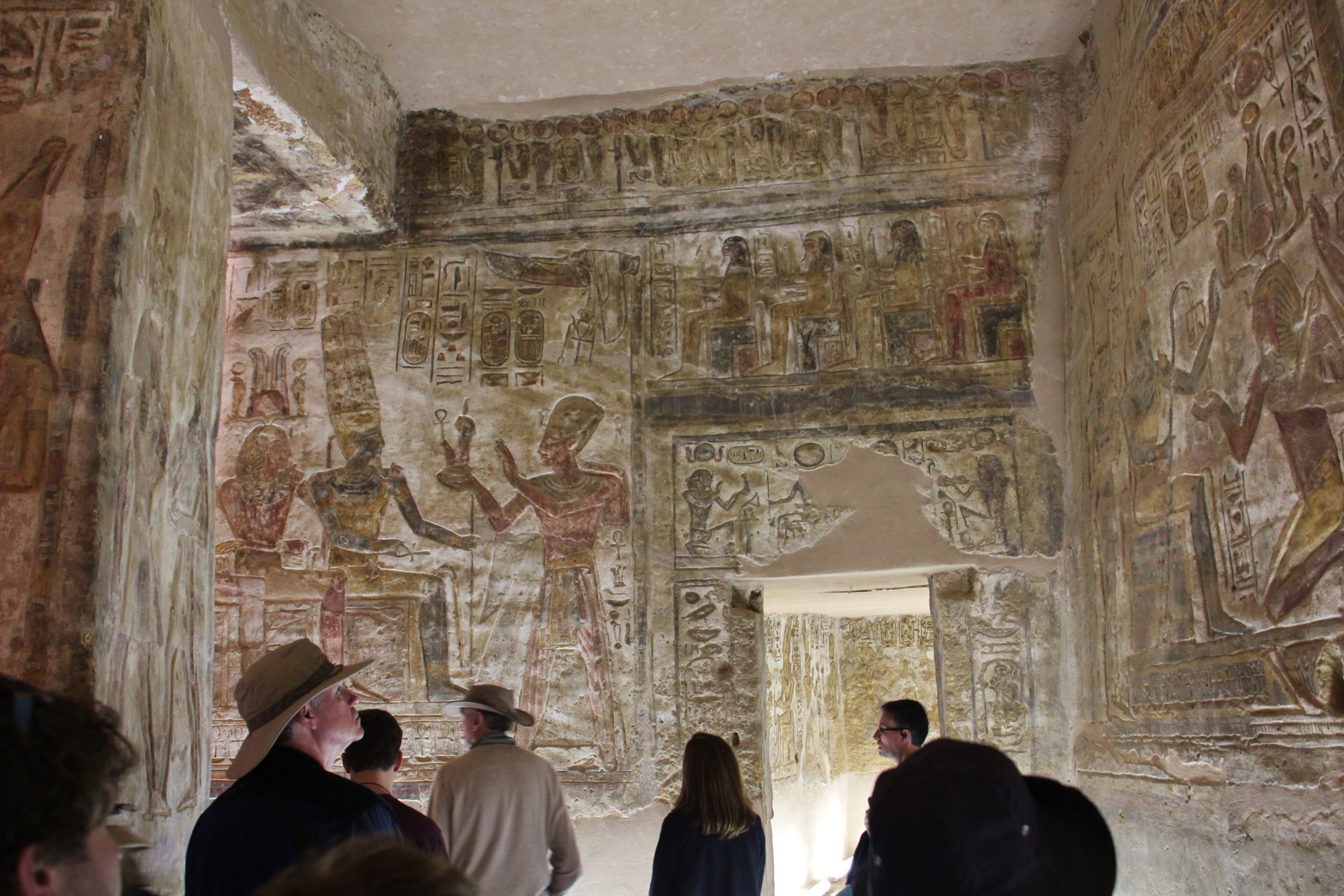 Tourists look at carvings in the Temple of Derr in Lower Nubia, Egypt.

Nevertheless, the significant fatigue-penetrating powers of Abu Simbel are twofold. First, when we disembark from our boat and gaze at the four astounding, 65-foot colossi of Pharaoh Ramesses II guarding the entrance of the Great Temple, it’s obvious that Abu Simbel is of the most awe-inspiring examples of ancient Egyptian architecture. Pharaoh Ramesses II built the two temples that comprise Abu Simbel: the Grand Temple is dedicated to himself and the Small Temple is dedicated to his favorite wife, Nefertari. The temples’ beautiful artistry is matched only by their romantic backstory: Ramesses II built the Great Temple to intimidate his Nubian enemies, but he loved his wife Nefertari so much that he decided to build a second temple dedicated to her. He ordered two statues of her in front of the temple to be built equal in size to his own — a powerful, never-seen-before gesture of love for the time’s ego-consumed rulers, who believed they were gods. 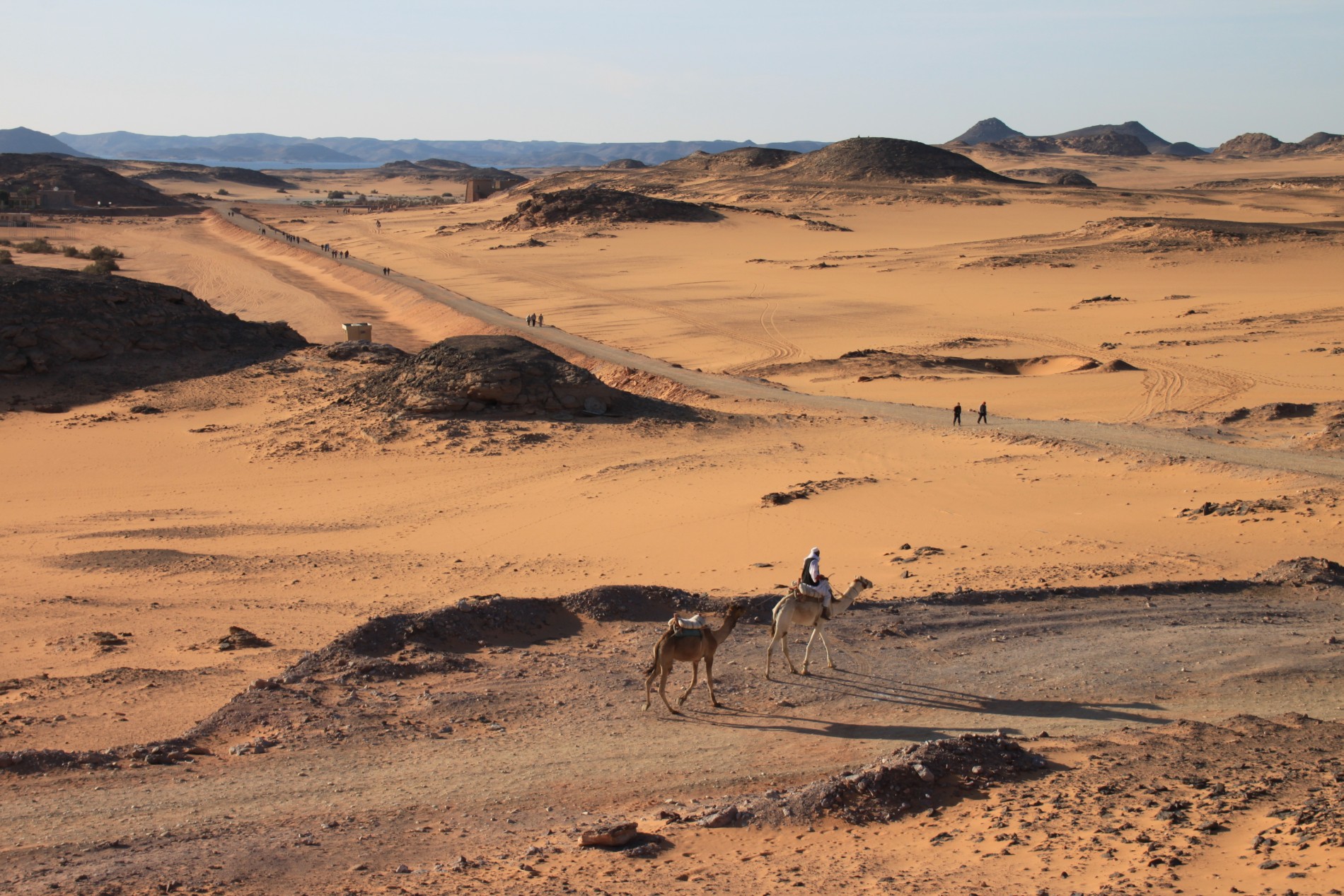 Tourists ride camels across the Nubian Desert near Wadi es-Sebua in Nubia, Egypt.

Second, Hanaa tells us that, in 1964, the rising waters of manmade Lake Nasser, as a result of Aswan High Dam construction — a public works projects designed to control floods and provide hydroelectricity for half of Egypt — threatened to flood Abu Simbel and many other ancient Egyptian temples. In arguably history’s greatest feat of archeological engineering, as the water level rose, UNESCO and Egyptian construction crews raced for four years on a $40 million project ($294 million in today’s dollars) to cut the temples into 15,000 tons of 1,036 sandstone blocks, and then move them, block by block, to a new location 210 feet higher and 650 feet back from their original site. Because the original temples were cut into the rock face of a mountain, crews also constructed a large, concrete and steel dome in which to reconstruct them. 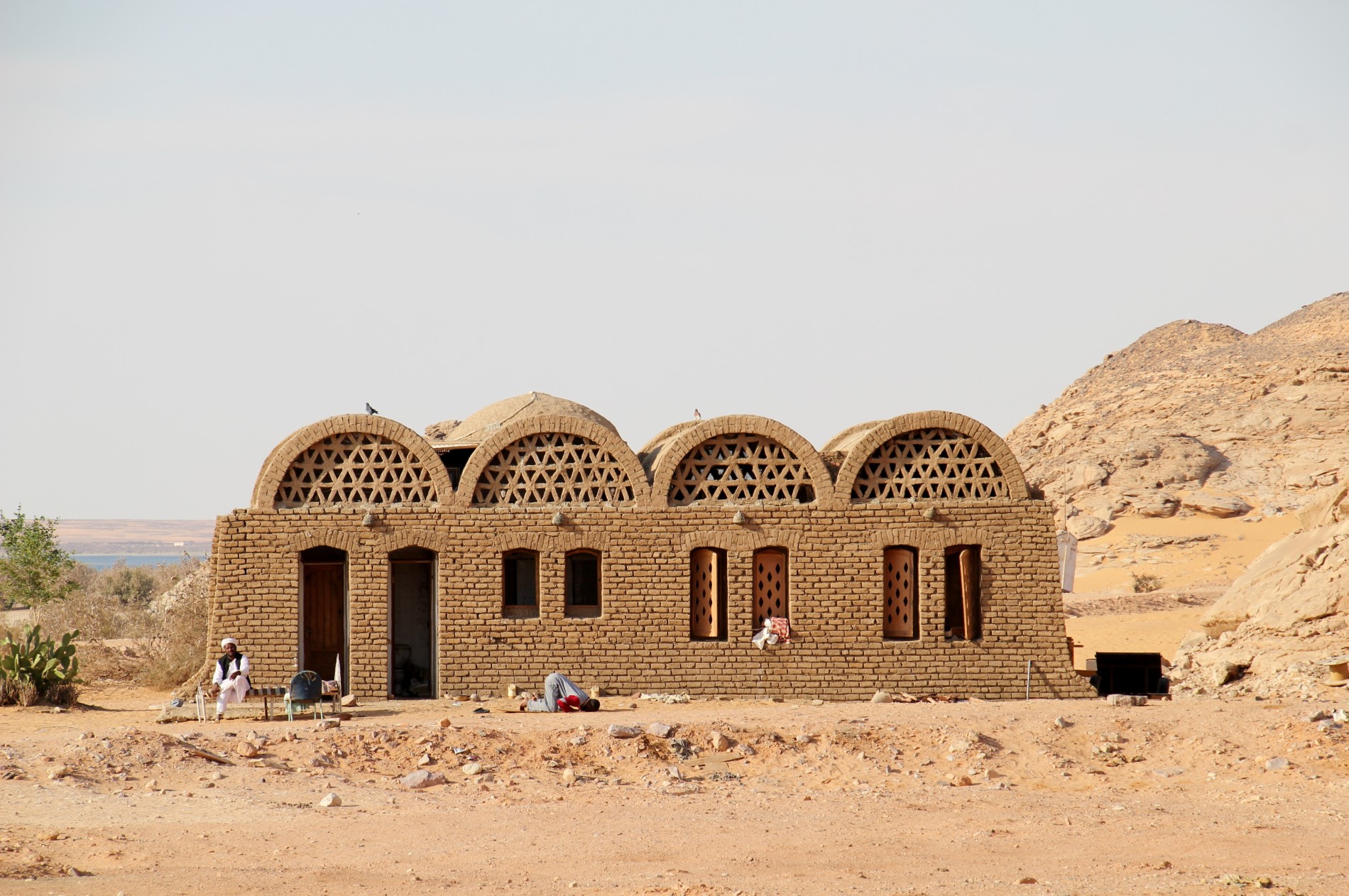 An Islamic man prays in front of a building in Nubia, Egypt.

As I tour through the chambers of the Great Temple, running my eyes across the intricate hieroglyphics and carvings covering every wall, I decide that the only thing more astonishing than the ancient Egyptians’ construction of Abu Simbel is modern man’s meticulous reconstruction of it.

The next morning, we continue sailing on Lake Nasser toward the Nubian Temples of Amada, Derr, Kalabsha, and Wadi es-Suba. We’re still impressed by the temples’ beauty and history, but it’s hard to avoid the feeling that nothing we’ll see from now on can compare to the magnificence of Abu Simbel.

Soon, our boat makes a stop along the Lake so that we can see the Temple of Amada. Though Cairo is only 700 miles away, our controlled tour of Egypt makes the capital city and the country’s political problems seem very distant.

“Though many of these temples were also moved from their original locations, some temples and sites weren’t saved from the dam and remain underwater,” Hanaa tells us.

“Wow, is it possible to scuba dive Lake Nasser and see them?” I ask.

“Oh, no, it’s much too dangerous because of the Nubian crocodiles,” Hanaa says. Again, I find myself annoyed that she’s so focused on keeping us insulated. But, as if on cue, I see two Egyptian men standing outside the temple holding crocodiles. As soon as they catch sight of us, they rush over to our tour group. 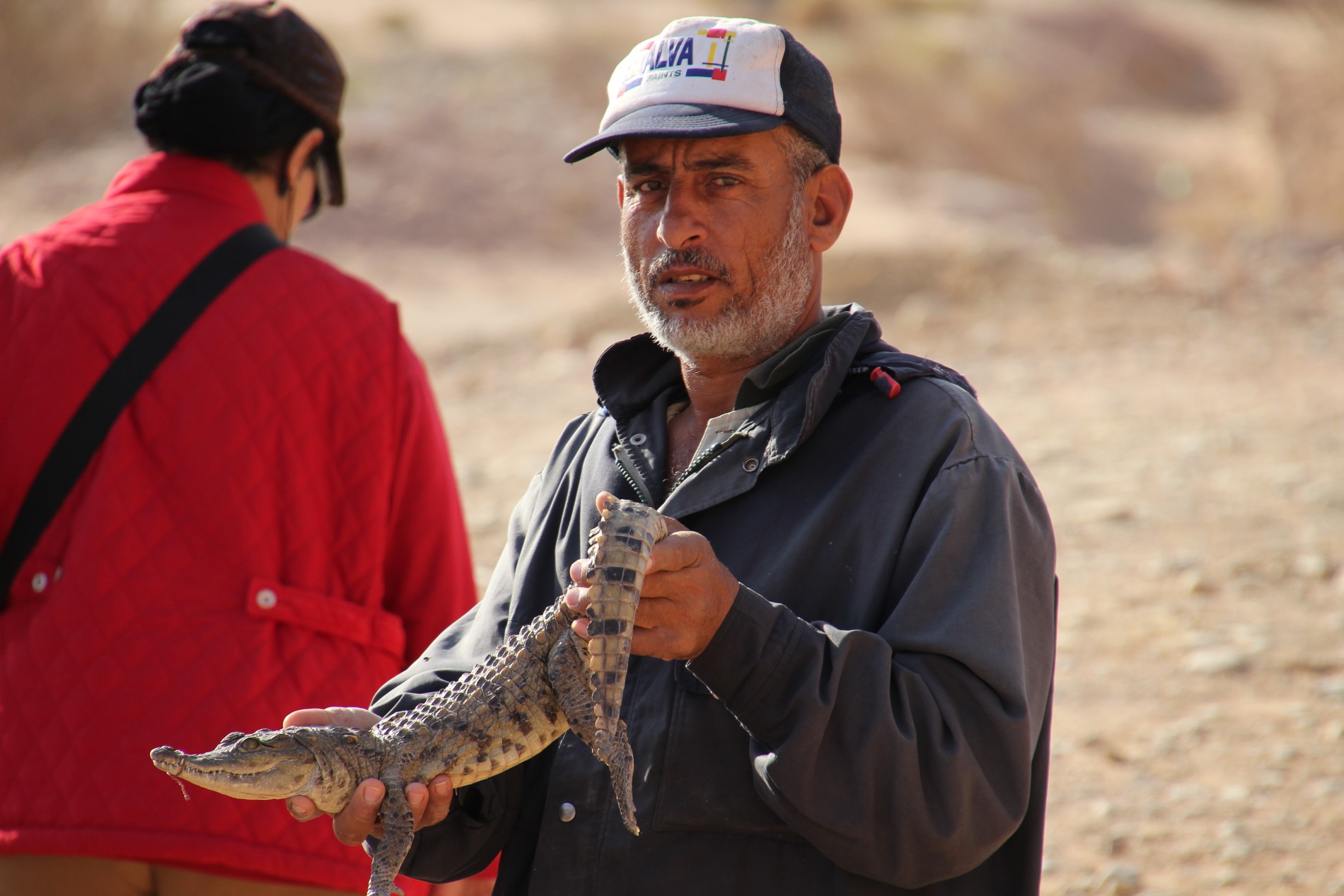 An Egyptian man tempts tourists with a crocodile near the Temple of Amada in Nubia, Egypt.

“Careful,” Hanaa warns. “The people here are desperate for money because the revolution has stopped most of the tourists from visiting Egypt. The men will be very insistent.”

She’s right, and they offer to let us hold the crocodiles (whose jaws are wired shut) in exchange for a small fee. The men, eager for cash, offer to let us wear the crocodiles as hats on our heads for some extra money. We agree to the higher charge, because, hey, you don’t get to wear a crocodile on your head very often.

Standing, with a crocodile perched on my head, in the middle of the Nubian Desert, with no visible towns or cities for tens of miles, I find myself once again feeling hopeful for Egypt. The crocodile men have reminded me that all people, including Egyptians, are infinitely resourceful.

Right now, Egypt’s political problems may seem impossible to solve. But, I suspect that, long ago, the world thought that moving Abu Simbel, two enormous temples made of 15,000 tons of rock, would be impossible for Egyptians too.

OVERVIEW: Though previous Egyptian President Hosni Mubarak resigned on February 11, 2011, political demonstrations and violent clashes continue sporadically throughout Egypt. Egypt’s presidential elections will take place on May 23 and 24, 2012 and a new president is scheduled to take office by June 30, 2012. In addition, two American tourists were kidnapped in Egypt’s Sinai Peninsula in February 2012 (though they were released after six hours). With that in mind, it’s mostly business as usual in Egypt now — except that travelers can get great deals on hotels and tourist services due to the current lack of demand. Also, you won’t find yourself standing in line for anything.

LOGISTICS: We arranged for a guided tour of Cairo, Luxor, Aswan, and Nubia, much of which was on boat trips on the Nile River and Lake Nasser, through Viking River Cruises. Though our $3,000-per-person packaged arrangement (the Pharaohs & Pyramids tour) was overpriced — the quality of the food and staterooms on our boats were not up to modern luxury standards and our tour guide functioned more like a cattle herder than a captivating Egyptologist — the trip’s logistics unfolded impressively flawlessly, and we managed to see almost all of the best sites in Egypt in an impressive 12 days. Nevertheless, if you’re adventurous enough to travel to Egypt independently, you can easily save money by negotiating prices as you go and staying in less expensive accommodations. Independent travelers in Aswan and Luxor have been known to negotiate rock-bottom prices for Nile River and Lake Nasser cruises with some effort.