Why you should fire your tour guide and lead yourself through Israel and the West Bank.

APRIL 1, 2012 — “And, there is the Edicule, the supposed location of Jesus’s burial and resurrection,” declares Yossi, our Israeli tour guide. Despite the fact that my mom, brother (Brian), and I are standing in the Church of the Holy Sepulchre in Jerusalem, Israel — the single holiest destination in the world for Christians — Yossi’s enthusiasm seems calibrated at the level you’d expect for a visit to a Starbucks.

“Take a quick look around and get your pictures,” Yossi says. “Then, there’s a great coffee shop around the corner — let’s meet there!” I realize that I’m wrong. Apparently, a Starbucks visit gets Yossi much more excited than the birthplace of the Christian religion.

During the three days we’ve spent in Jerusalem so far, Yossi has met only the minimum definition of a tour guide: he has led us to Jerusalem’s and Bethlehem’s major historical sights — the Temple Mount (one of the world’s holiest sites for Judaism, Islam, and Christianity), the Western Wall, the Israel Museum (location of the Dead Sea Scrolls), the Garden of Gethsemane, the Room of the Last Supper on Mount Zion, the Church of the Nativity, the Stations of the Cross, and the Church of the Holy Sepulchre — and has given us short summaries about them. But, Yossi doesn’t seem to realize that his cursory synopses aren’t enough. His lack of enthusiasm is sapping the fun from our trip, and a simple guidebook would enable us to do everything he is doing for us for ourselves and give us more historical background. 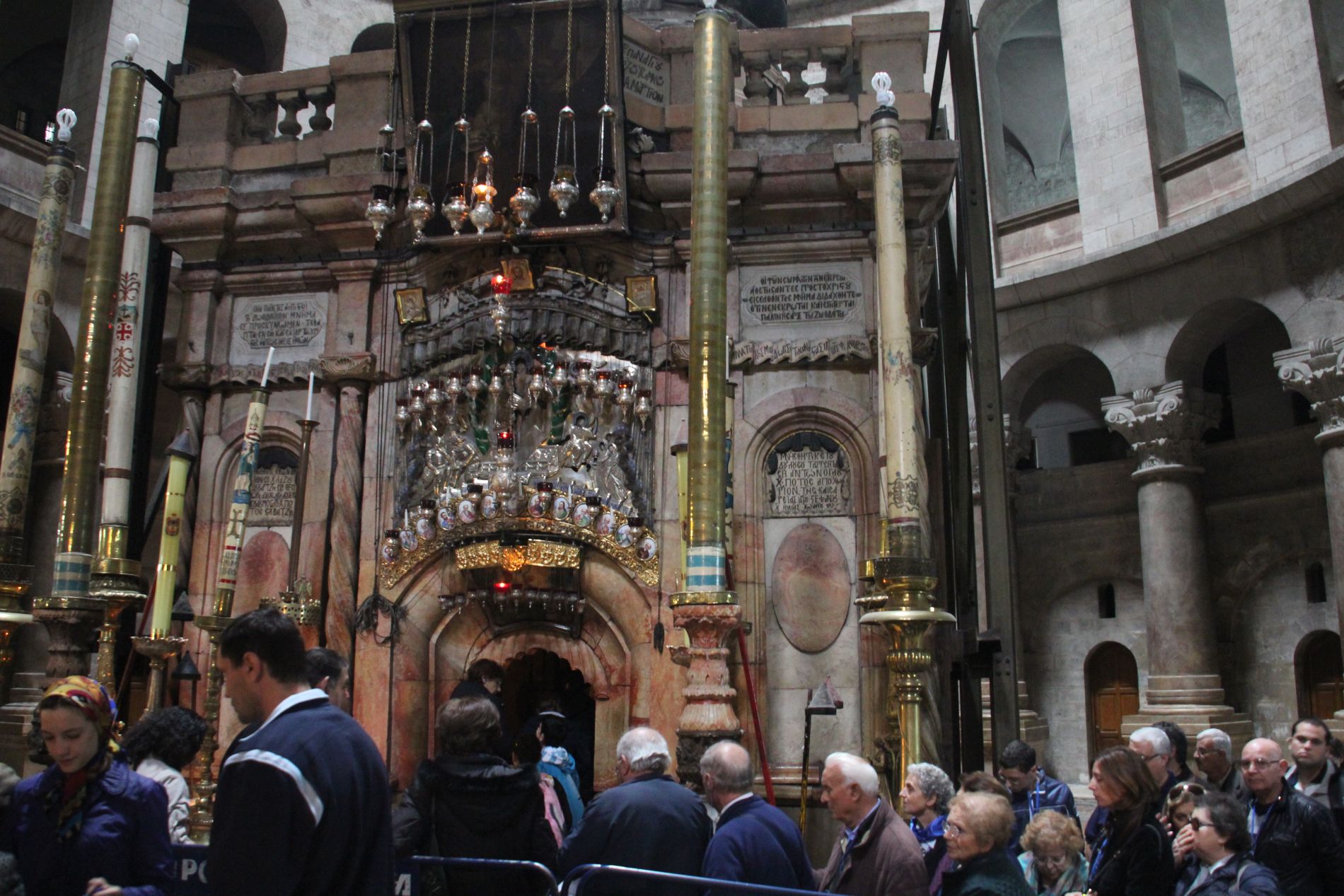 Tourists wait in the Church of the Holy Sepulchre to enter the Edicule, the alleged Tomb of Jesus.

Even a mediocre storyteller would have little problem spinning a tale while leading an Israel tour, because, after all, the story of these places is one of the oldest known to man and the foundation of most of the world’s religions. A great storyteller would not only weave the sites into a rich epic about Abraham, Isaac, Jacob, and Moses, drawing from the Torah, the Old and New Testaments, and the Quran, but also would contextualize the story in terms of the modern world. He would build a linear narrative, possibly starting by explaining that the Dead Sea Scrolls — one of the most important archaeological finds ever — prove that most of the text of the modern Torah and Old Testament matches the same scriptures used over 2,000 years ago. He would emphasize that though scholars agree that Jesus existed, no one really knows whether the marked locations of the Stations of the Cross and Jesus’s tomb are accurate. He might even discuss in detail the current politics surrounding the region’s religious sites and geography, mentioning the tension between Jewish, Christian, and Muslim interests over the Temple Mount and other miscellanea, like the Garden Tomb, which some (Mormons, for example) believe is the real site of Jesus’s burial. 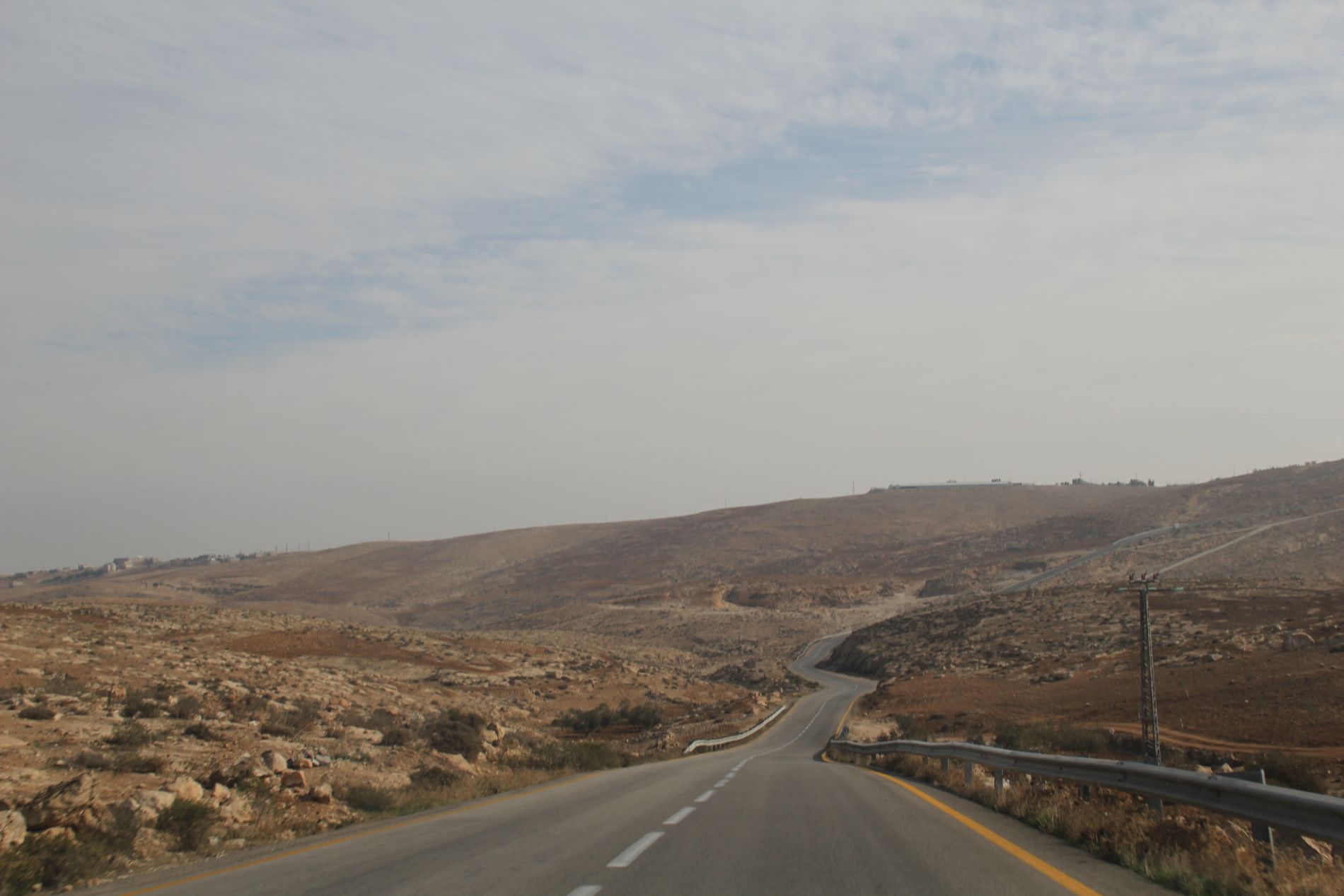 Route 60 leads south through Israel, the West Bank, and the Judaean Mountains.

But, Yossi doesn’t do any of that, and when we ask him if he’s willing to substitute the sights on our final day tour of Jerusalem with the nearby Dead Sea and Masada — the site of one of the final dramatic battles in the First Jewish-Roman War — he says that he’s willing, but only for an additional US $500. Since I already think that Yossi’s tour is worth less than my US $16 guidebook, I convince my family to ditch him. Instead, we decide to rent a car to visit the Dead Sea and Masada by ourselves.

A sign near the Dead Sea warns swimmers of the dangers of the water’s high salt content.

Renting a car in Jerusalem turns out to be a small adventure in itself — when we arrive at Thrifty, one of the cashiers and an Israeli are screaming at each other in the most violent, non-violent confrontation I have ever seen in real life. We have no idea what the argument (in Hebrew) is about, but I’m suddenly terrified of whatever horrible acts the Jerusalem Thrifty carries out on its customers that result in scream-to-the-death matches. Nevertheless, though we end up having to provide a ridiculous deposit (US $1000) and agree to draconian rental terms, we manage to get a car for only US $30 for the day — cheaper than if we had tried to take a group tour bus (US $100 per person) or public bus (100 NIS/US $27 per person). 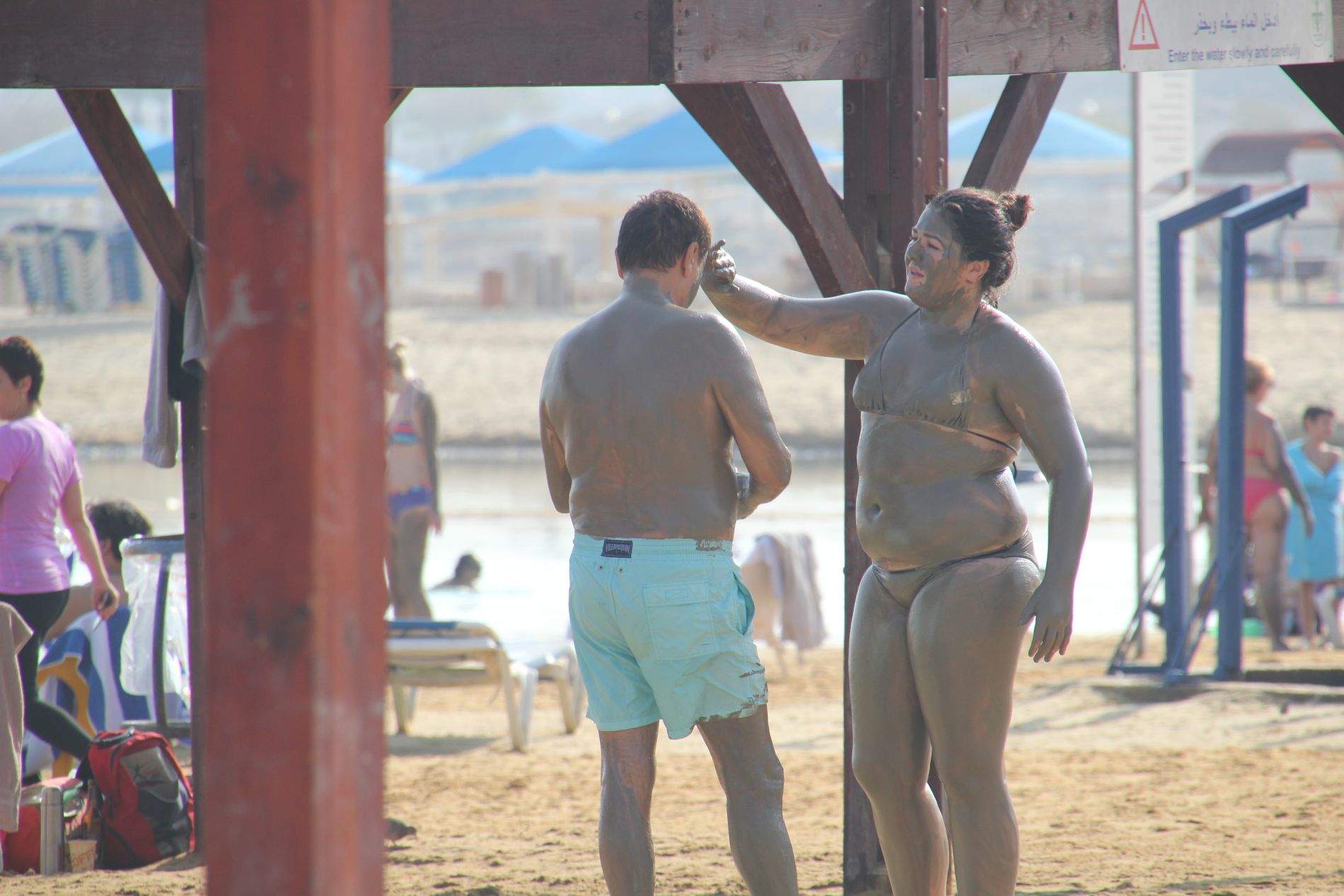 Without a tour guide, we start by heading somewhat aimlessly south, through the West Bank on Route 60, past the cities of Bethlehem and Hebron — because all Israeli road signs seem stolen from a warehouse of the greatest hits of religious scripture. We drive through the golden-brown Judaean Mountains and the barren Judaean Desert toward the city of Arad, which I remember is the closest city to Masada. In the middle of the desert, with nothing but mountains of sand and rock visible in any direction, we’re stopped by an Israeli Army soldier at a road checkpoint. She’s respectful, but she seems suspicious of our explanation that we’re driving Route 60 by ourselves to see Masada. She demands that we send all of our possessions through an X-ray machine, which prompts a lengthy and animated discussion in Hebrew between two of the soldiers, analyzing the internal circuitry of Brian’s iPad. Nevertheless, after another group of soldiers crawls under our car and finds no bombs or other weapons attached to the undercarriage, they return the harmless iPad. 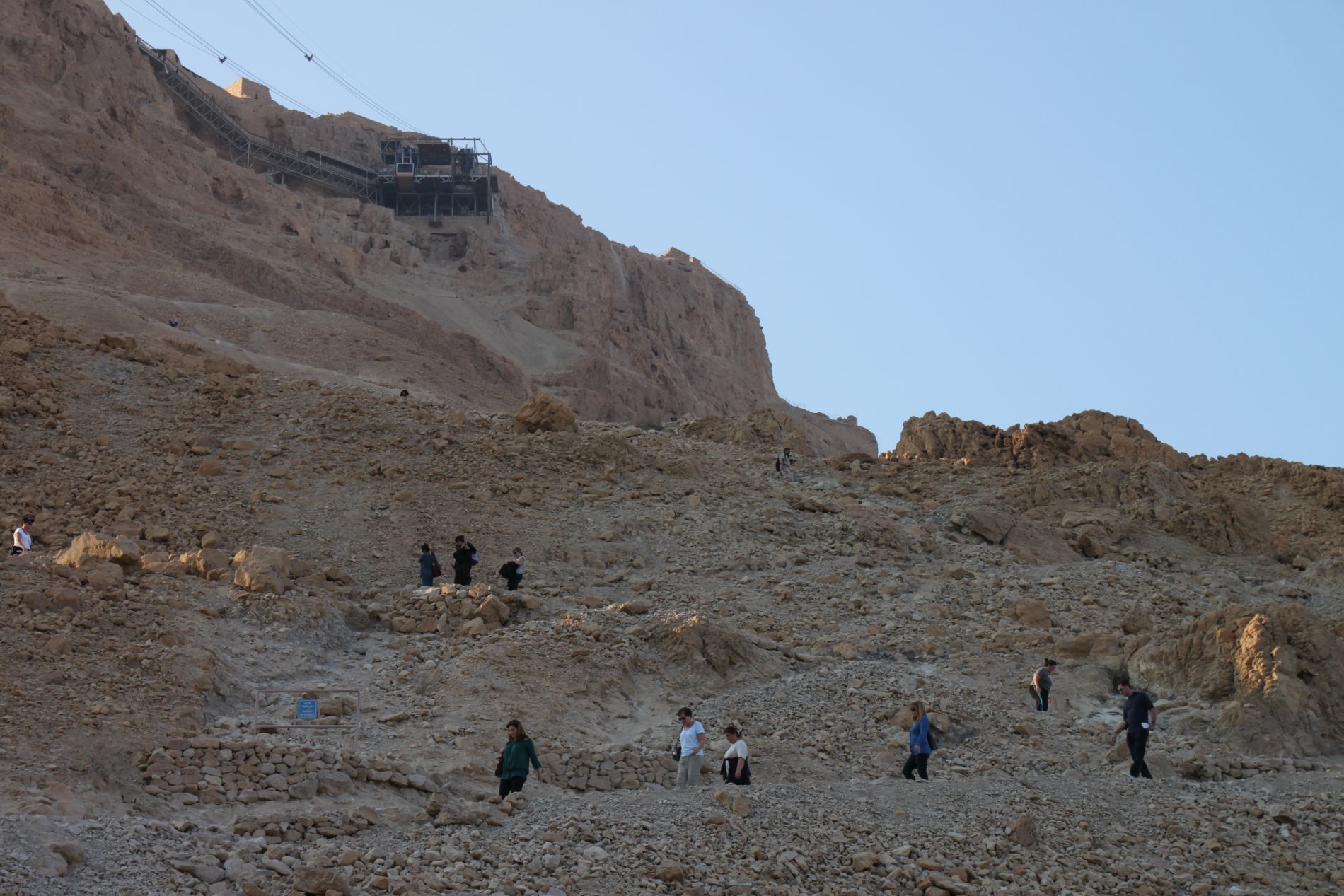 Tourists walk on the Snake Path leading to the top of Masada.

“It’s faster to take Route 90 to Masada from Jerusalem, you know,” the soldier tells us before letting us leave. As we pull away, I realize that a tour guide would have taken us via the faster route, but I’m already sure that our Judaean-Mountain adventure has been a lot more fun. After winding over a desolate mountain pass and heading east, we finally land in Ein Bokek, a resort destination on the Dead Sea with access to a public beach.

Despite unnerving warning signs posted on the beach — “Do NOT jump or dive into the water”; “Do NOT immerse your head”; “Do NOT splash water on yourself or others” — the three of us put on swimsuits and wade into the sea. At first, I discover that trying to tread water in a typical way gives me the sensation that I’m going to lose my balance, fall headfirst under the water, and drown. But, even without a tour guide, we quickly become accustomed to the very strange sensation of being able to float effortlessly in a sea 8.6 times saltier than the ocean and enjoy the swim. 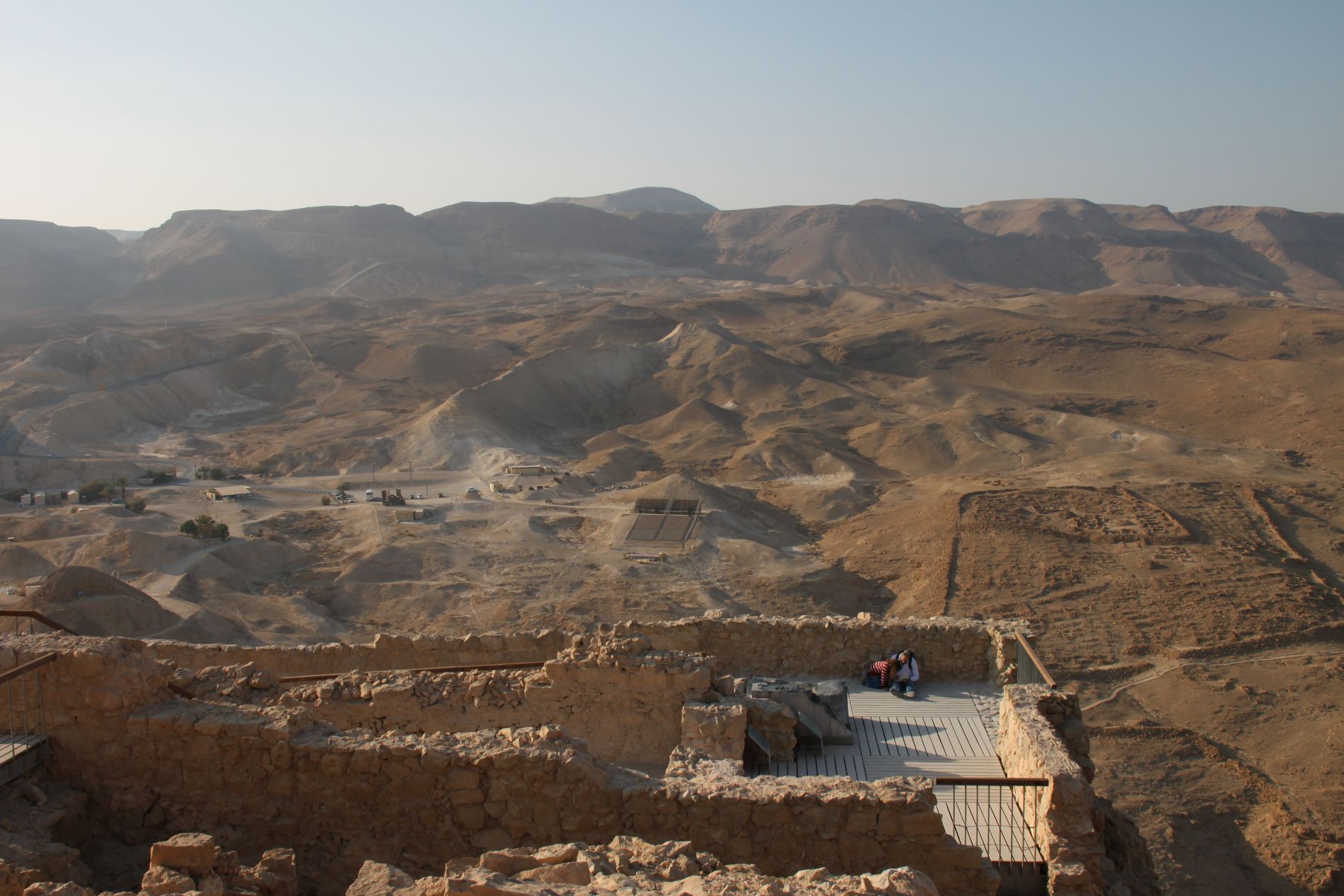 A view of the surrounding desert as seen from the top of Masada.

After our dip, we make a quick stop so that Brian can buy packages of mud from the Dead Sea for his girlfriend and friends at home (“Really!? You’re going to carry six bags of mud all the way back to the US?” I ask incredulously) and then drive to Masada.

At Masada, we learn from a short documentary film, our guidebook, and informational placards the astonishing story of the fortress, which sits atop an isolated rock plateau in the Judaean Desert. At the end of the First Jewish-Roman War, Jewish rebels and families used the fortress to hold off troops of the occupying Roman Empire during a three-month siege. Despite Masada’s nearly impenetrable defenses (spoiler), the Roman soldiers eventually scaled the plateau by building a 375-foot assault ramp and rolling tower with a giant battering ram to breach the fortress’s wall, prompting a mass suicide of the Jewish rebels hidden inside.

On the top of Masada, my mom, Brian, and I explore the ruins of the stronghold and marvel at the size of the enormous ramp leading to the top of the plateau. Experiencing the heat of the desert, the size of the fortress, and the scope of the ramp construction project firsthand makes the story of the battle come to life in our imaginations. Afterward, we follow the steep, 2.5-mile Snake Path — the same route that the Jewish rebels used to access the fortress — back to the desert floor. Without a tour guide dragging us down, we’ve regained our organic sense of discovery. 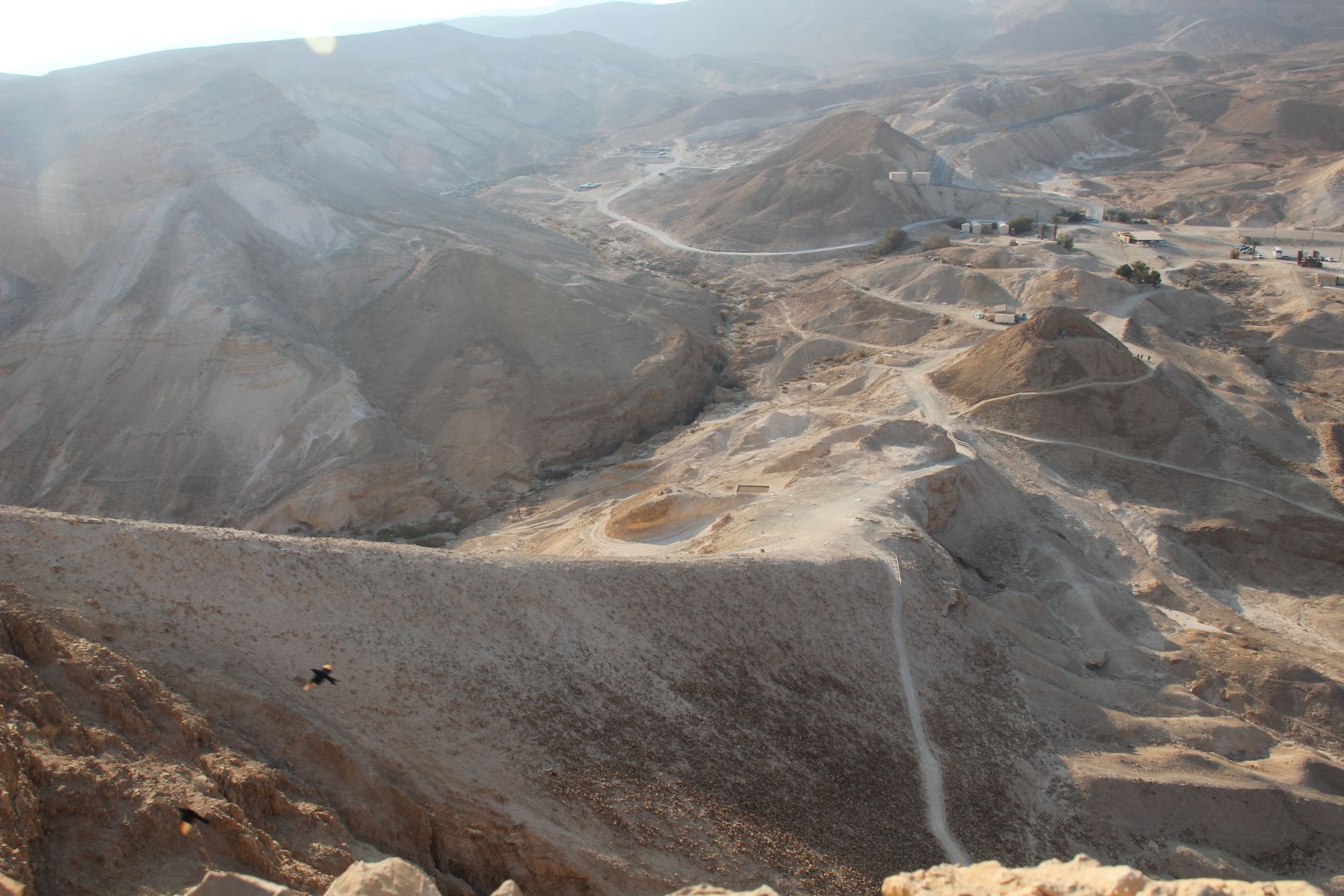 A famous ramp, built by Roman soldiers during a siege, leads to the top of Masada.

Months later, I’m still acting as my own tour guide, exploring the history of the Dead Sea and Masada myself by watching the 1981, epic ABC miniseries Masada, filmed on location and starring Peter O’Toole (Commander Flavius Silva), Peter Strauss (rebel leader Eleazar ben Yair), and Barbara Carrera (Sheva, Silva’s Jewish mistress). The series is six hours long, but the vivid depiction of the sprawling story is so mesmerizing that I can’t stop watching. The almost perfect storytelling adeptly weaves together the tale of the Roman soldiers toiling for months to build a ramp and a captapult, Flavius falling tragically in love with gorgeous Sheva, Eleazar convincing his followers of their fateful end, and Flavius realizing the scope of the disaster he has wrought: “We’ve won a rock in the middle of a wasteland, on the shores of a poisoned sea.”

It’s disappointing that our tour guide Yossi’s storytelling skills weren’t half as good as Peter O’Toole’s, but there’s a part of me that’s glad. In Israel, my family and I learned that the most fun comes from doing the exploring yourself.

How to see Jerusalem, the Dead Sea, and Masada in Israel

OVERVIEW: Jerusalem is one of the oldest continually inhabited cities in the world and is home to some of the world’s holiest religious sites: the Temple Mount, the Western Wall, the Israel Museum (location of the Dead Sea Scrolls), the Garden of Gethsemane, the Room of the Last Supper on Mount Zion, the Church of the Nativity, the Stations of the Cross, and the Church of the Holy Sepulchre. The nearby Dead Sea is one of the saltiest bodies of water in the world (average salinity of 40%). Masada, the mountaintop fortress which was taken under siege by the Roman troops at the end of the First Jewish-Roman War, is only 12 kilometers from the public beach on the Dead Sea in Ein Bokek.

LOGISTICS: Take a flight to Ben Gurion International Airport in Tel Aviv, Israel. Then, to get to Jerusalem: take a 60 minute taxi (180 NIS/US $48) or shared taxi (50 NIS/US $13) ride; a 60 minute bus ride from Tel Aviv’s Central Bus Station to Jerusalem’s Central Bus Station (the Egged bus 947 leaves every 20 minutes and costs 21.50 NIS/US $6); or a 90 minute train ride from Tel Aviv’s Merkaz/Savidor station to Jerusalem’s Malkha station (leaves every hour and costs 20 NIS/US $5). We arranged for a Jerusalem tour guide through Viking River Cruises and Gordon Tours, though our tour guide left a lot to be desired. After you’ve seen the sites in Jerusalem, the fastest and cheapest way to visit the Dead Sea and Masada is to rent a car (US $30 for the day from Thrifty). It’s also possible to take a group tour bus (US $100 per person; ask a hotel for details) or Egged public buses 486 and 487 (100 NIS/US $27 per person).