Jumping off the Bridge to Nowhere

JUNE 4, 2009 — When I first read about the Bridge to Nowhere — an isolated concrete bridge perched over the San Gabriel River leading neither from nor to any destination — the idea of it caught my imagination. Just the name made the Bridge seem cosmically significant, as though simply walking over it might take a person away from his life and problems. At least, finding the Bridge seemed like it might be an adventure. 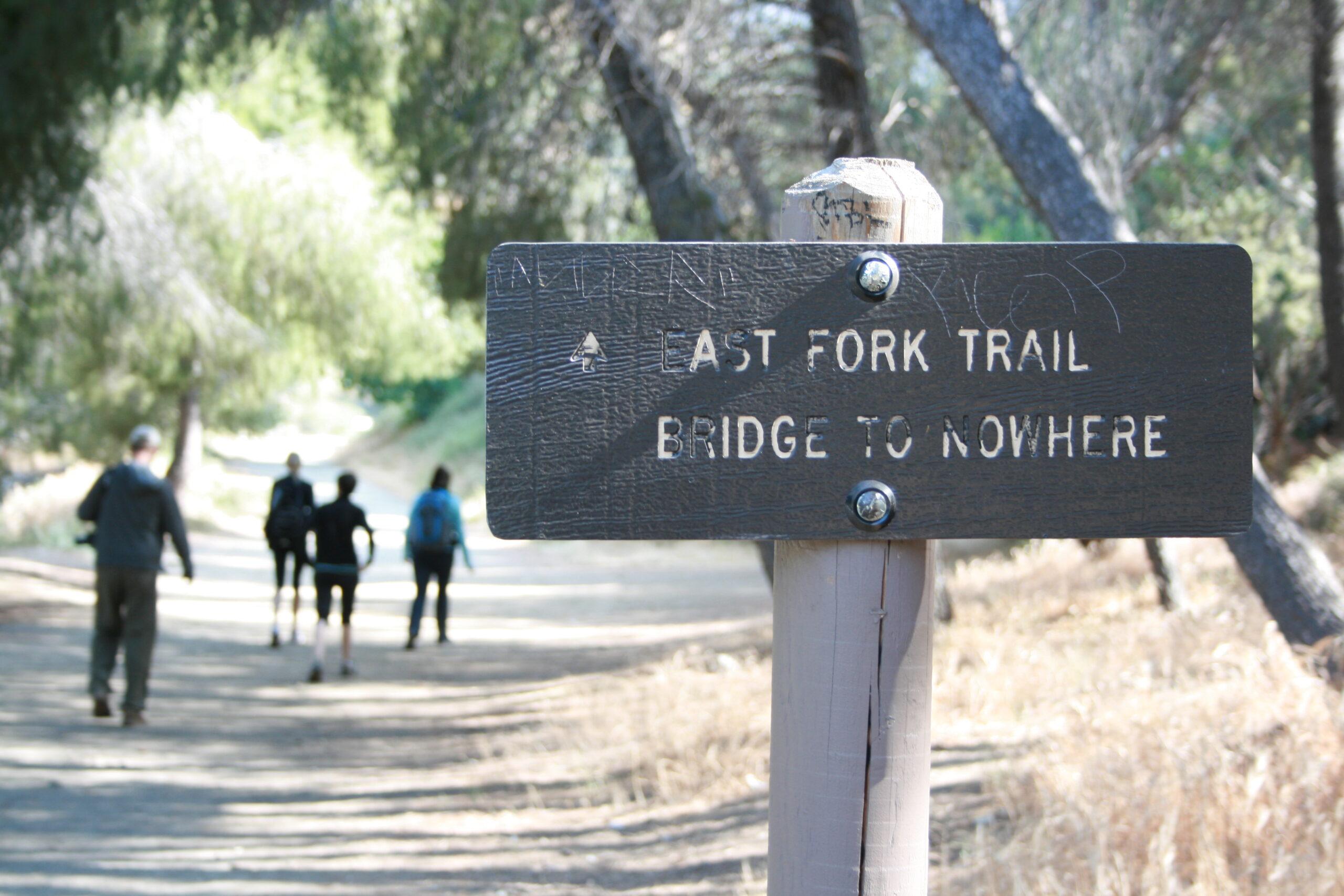 Hikers walk past the sign indicating the trail to the Bridge to Nowhere.

Construction workers built the Bridge as part of a planned road through the San Gabriel Mountains, but after a flood destroyed the road in 1938, the project was abandoned, and the Bridge sat useless in the wilderness. To find it, my friends and I hiked five miles into the Angeles National Forest this past weekend, following the East Fork of the San Gabriel River. The hike required us to cross the River many times, giving us wet, squishy socks, and we battled Our Lord’s Candle, a razor-sharp flowering yucca plant. After about two and a half hours, we found the Bridge, nestled deep in a mountain canyon. 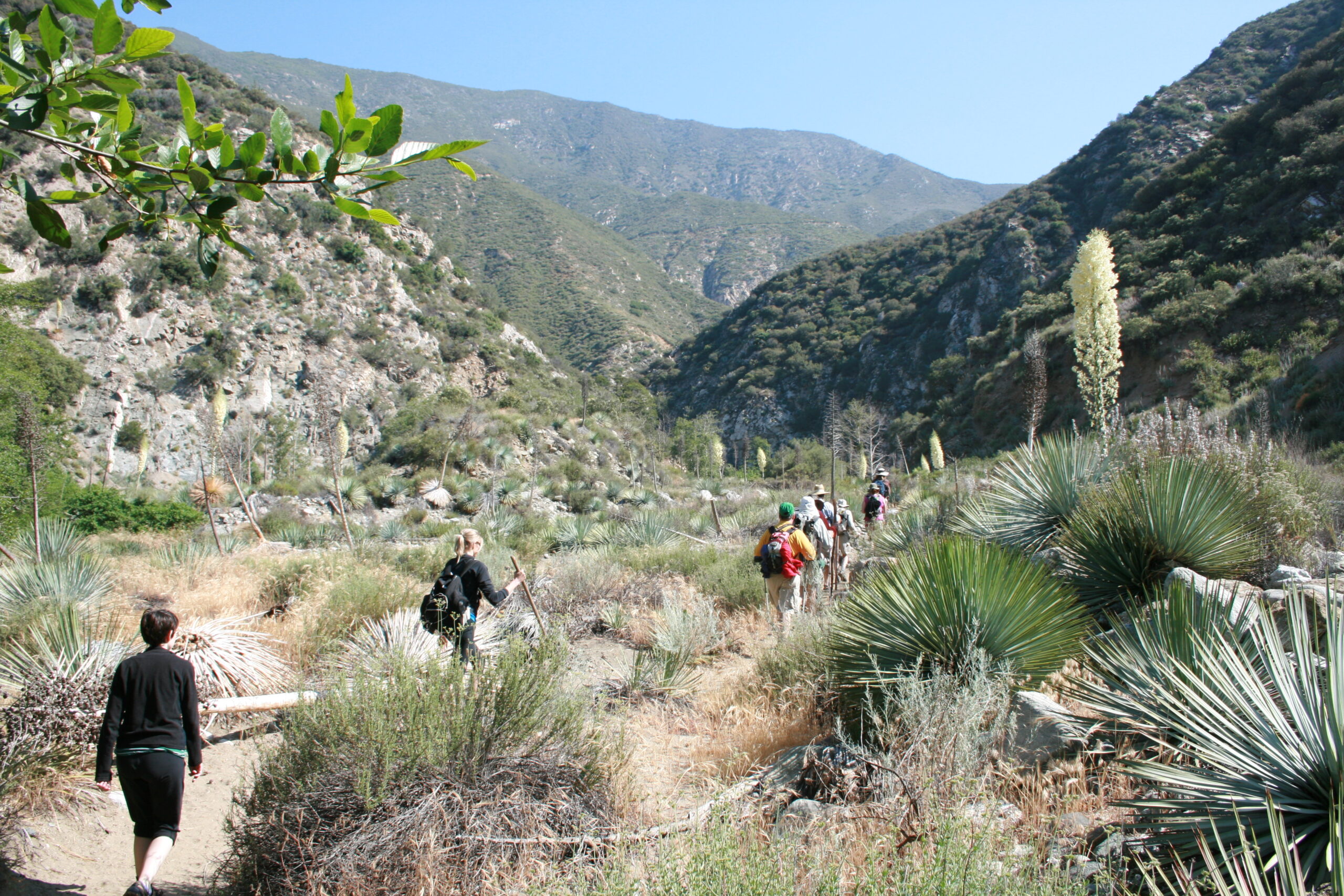 But when we walked onto the Bridge, I looked down at the rushing river below, and I didn’t feel anything special. The Bridge, a mass of concrete and rebar in the middle of the wilderness, just sat like a lonely orphan, without providing us any earth-shattering revelations about ourselves.

We rested under the unforgiving desert sun, eating sandwiches on the Bridge, waiting for the lightning of inspiration to strike us. Then, suddenly, we heard voices, and saw in the distance a mass of high school and college students bounding toward us. Bubbling with excitement, they had hiked to the Bridge to Nowhere for one reason: to jump off of it. Bungee America, the oldest operating bungee jumping company in the US, had guided them to the Bridge. Maybe the Bridge only reveals its cosmic significance if you jump from it, I thought. 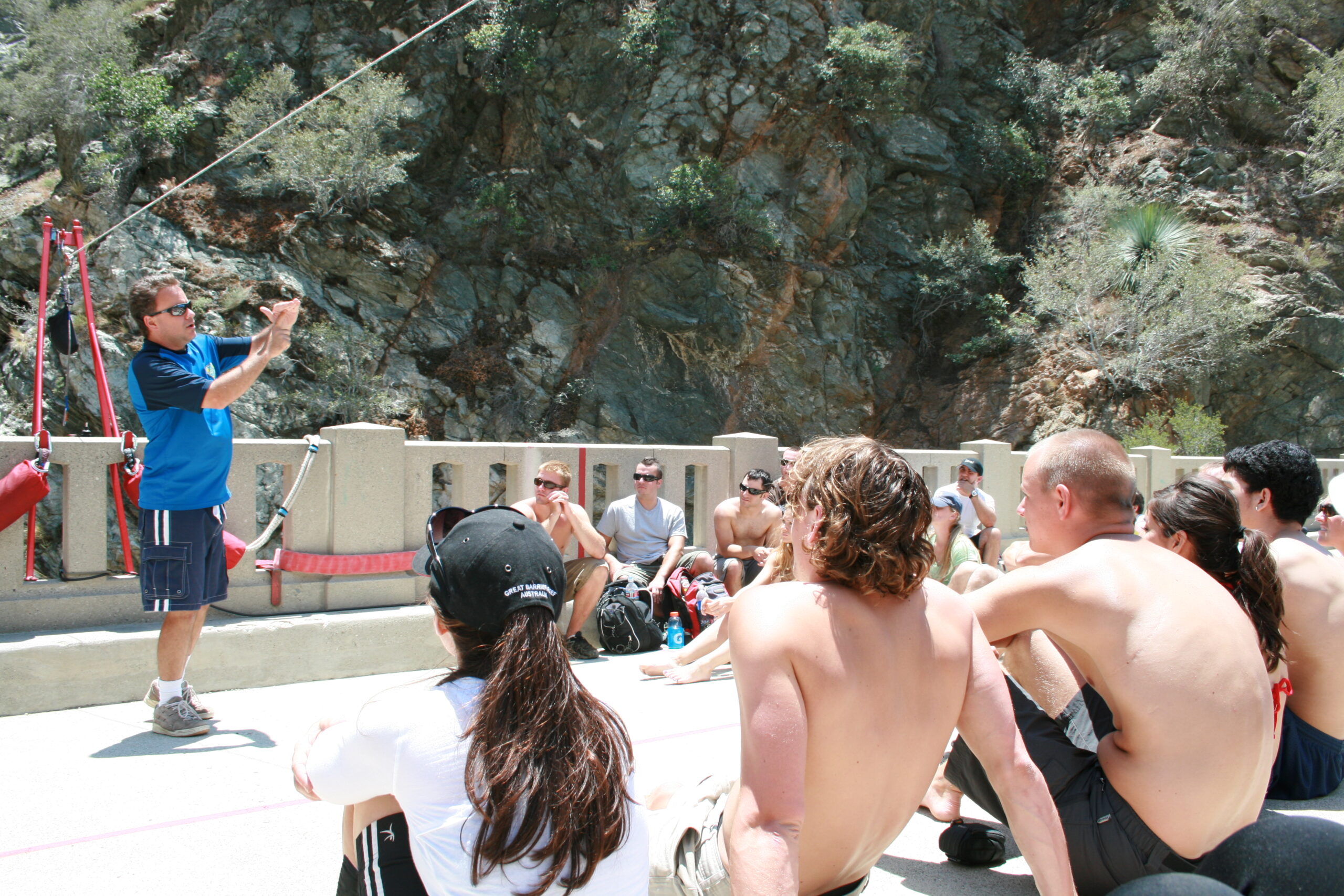 A Bungee America representative explains the art of bungee jumping.

My friend Suzanne and I had previously skipped right to skydiving together without ever graduating from bungee jumping, so we were excited to try it for the first time. We weighed in and listened attentively as the Bungee America experts explained the five types of jumps we were allowed to try: the forward swan dive, backward plunge, flip, elevator drop (in which the Bridge simply slips out from under you and you fall), and ankle harness jump. Each sounded more terrifying than the previous, but the professionals soothingly stressed their perfect 20-year safety record, and we were quickly convinced.

After our safety briefing, Bungee America divided us into weight groups. Like an emergency evacuation of the Titanic, the tiny size-zero teenage girls were to jump first and the hulking gym-rat guys were to jump last. Our hosts attached the bungee cord to the first jumper, a 110-pound bikini-clad blonde girl named Lara who didn’t seem even slightly nervous, and she climbed over the Bridge’s railing. About fifty people gathered at the Bridge’s edge to watch her dive from the Bridge to Nowhere, and the crowd’s excitement was palpable. In unison, the crowd counted down loudly from five. Then, she dove into the void.

A bungee jumper sails toward the San Gabriel River from the Bridge to Nowhere.

From the Bridge above, we heard the echoes in the canyon of her screams as we watched her bounce on the bungee cord. Then, to the sound of clapping and cheering, our hosts hoisted her back onto the Bridge. With crimson cheeks and a big smile on her face, she looked blissful. Someone asked her how she liked her jump, and bubbling over with excitement, she gushed, “Again! Again!”

And so, I watched Lara, Suzanne, and almost fifty other jumpers dive off the Bridge over four hours, one after another. Almost every time, the crowd helped count down to the dive and cheered when the jumper returned to the Bridge alive. When someone standing on the edge appeared nervous, the crowd helped them overcome their fear by cheering even more wildly until they eventually jumped. The people in the crowd mostly didn’t know each other, but the Bridge to Nowhere seemed to connect them. 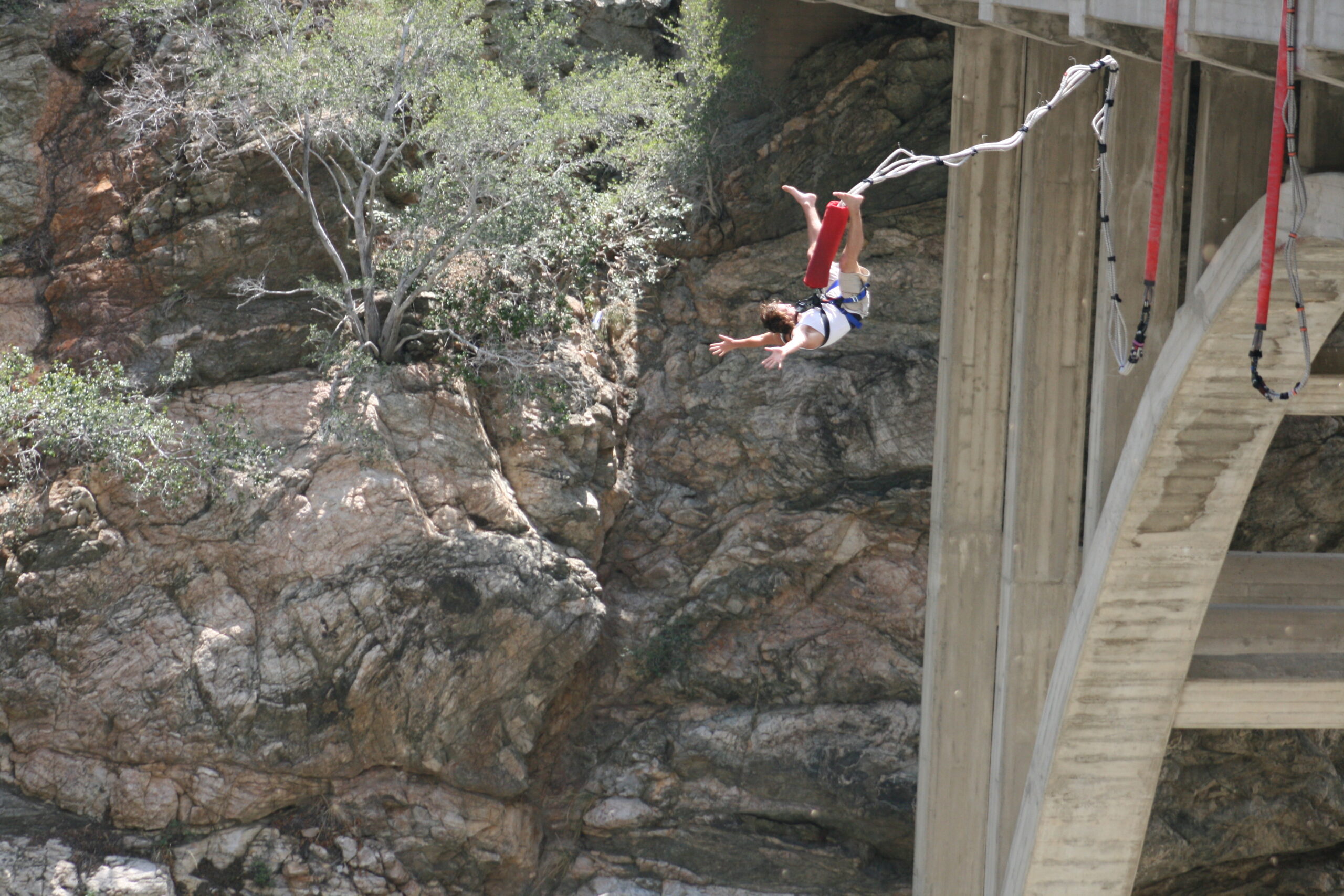 A bungee jumper flips off the Bridge to Nowhere.

Then, it was my turn to jump. After climbing over the railing and perching myself on the tiny platform on the Bridge’s edge, I peered nervously at the rushing water and jagged rocks of the San Gabriel River far below me. It looked like a long way down.

But then I heard the crowd chanting and my friends yelling at me from the canyon below.

“Sounds like you have a cheering section,” the guy from Bungee America said as he bounced up and down, motioning for me to dive.

I stretched out my arms, looked down at the river below, and dove off the Bridge to Nowhere, into the void. The roaring river and rocks below flew toward me. Adrenaline rushed through my body.

Then, the bungee cord stopped my fall. My cheeks turned crimson. I looked up at the energetic group of strangers on the bridge. I smiled big.

How to Bungee Jump From the Bridge to Nowhere

Contact Bungee America (310-322-8892) to make reservations. A single jump is $69, but if you buy more jumps, the company will let you be more adventurous with your jumping style. Bungee America guides will lead you on a weekend hike to the bridge as part of your fee. If you prefer to avoid the crowds and/or don’t want to bungee jump, hike the trail yourself on a weekday.

The hike is 10 miles round trip, so be sure to bring plenty of water, sunscreen, and lunch to eat when you get to the Bridge.

The trailhead for the Bridge to Nowhere hike is near the East Fork Parking Lot near Azusa, California. You must meet here at 8:00 AM if you are hiking with Bungee America. From the 210/605 freeway interchange near Los Angeles, follow the 210 east and exit on Azusa Avenue. Follow Azusa Avenue north through downtown Azusa and eventually into the San Gabriel Mountains on San Gabriel Canyon Road.

Stay left on San Gabriel Canyon Road after a road split following the Angeles National Forest Information Center. When you reach East Fork Road, turn right. Then, stay on East Fork Road, past Shoemaker Road. When you come to a three-way intersection, turn left onto East Fork Road and cross a white wooden bridge. The road ends in the trailhead parking lot.

The trail to the Bridge to Nowhere is obvious for most of the hike. If you simply follow the San Gabriel River, it’s almost impossible to get lost. View the route below or download the Without Baggage Bridge to Nowhere GPS track in GPX format. For especially detailed instructions, see SummitPost or Modern Hiker.

After hiking about two hours, the trail will leave the river and move to higher ground. Follow this trail as it will lead to the Bridge to Nowhere, above the river. If you prefer, you can continue following the river, but you’ll have to go swimming and then climb a slope to reach the bridge.