AUGUST 16, 2009 — “Moonwalkers?” a skinny, bookish man asked us cryptically. He had appeared from behind a tree at Mahogany Flat, our campsite in Death Valley National Park. I, along with my friends Rich and Wendy, stared at him blankly.

“Does the word ‘Moonwalker’ mean anything to you?” he queried without any explanation.

“Do you mean the mythical creature supposedly sighted in remote Utah?” I inquired stupidly. Rich and Wendy laughed at me for confusing “Moonwalkers” with Skinwalkers. 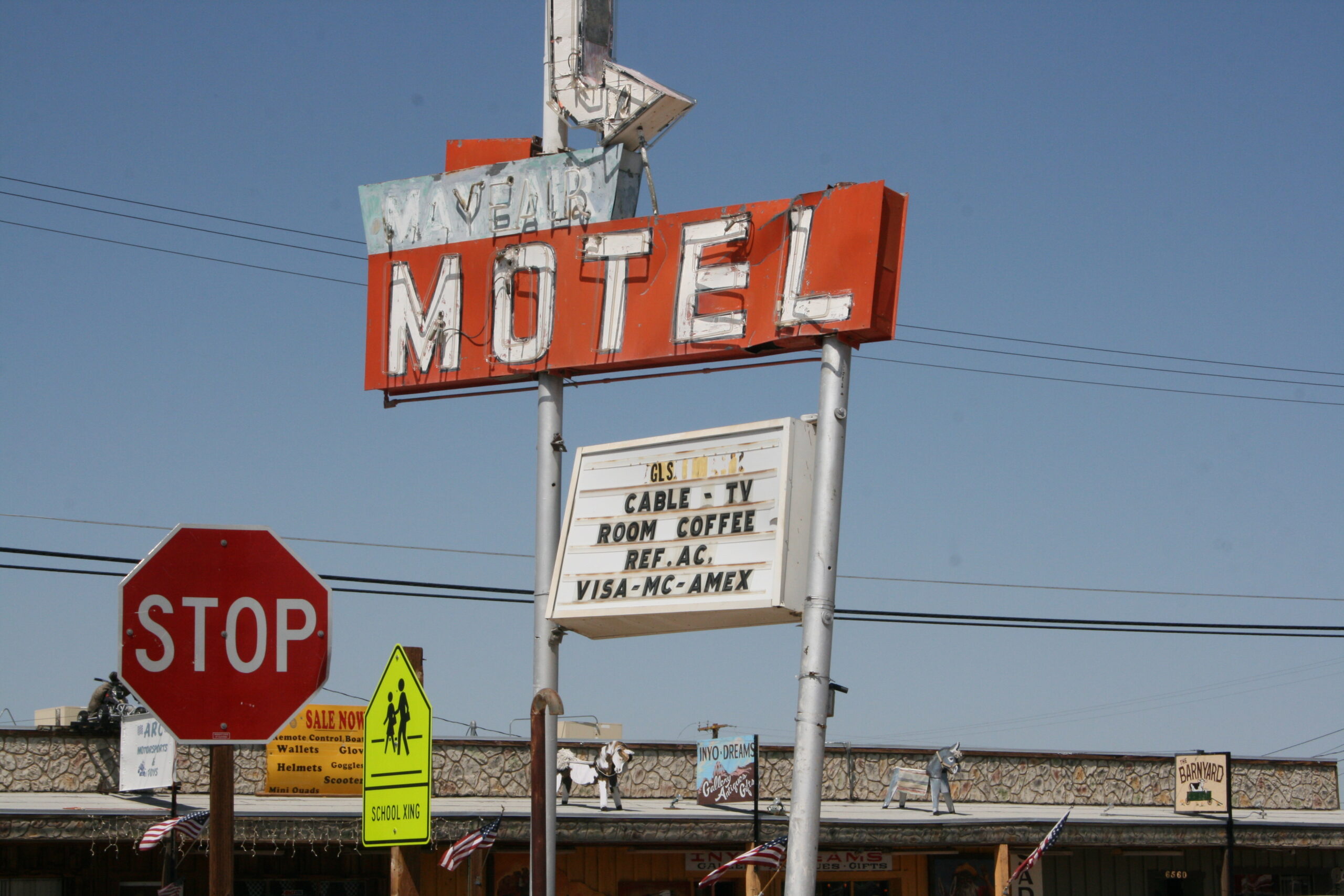 The three of us already had experienced a peculiar day.

After having left Los Angeles in the morning, we passed shadowy Naval Air Weapons Station China Lake, an enormous fenced-off weapons testing range in the eastern California desert, reminiscent of Area 51. Then, in Inyokern, the furniture, lamps, and oven sitting outside the condemned Mayfair Motel caught our eyes, and we stopped to read the unnerving, vague sign posted on the door of room 21: “UNSAFE TO OCCUPY: Due to inadequate sanitation and unsanitary conditions in room 21.” As we took photos, we wondered whether someone had rented the room and then built a meth lab or orchestrated a zombie attack. “Room 21” sounded like a movie waiting to be made. 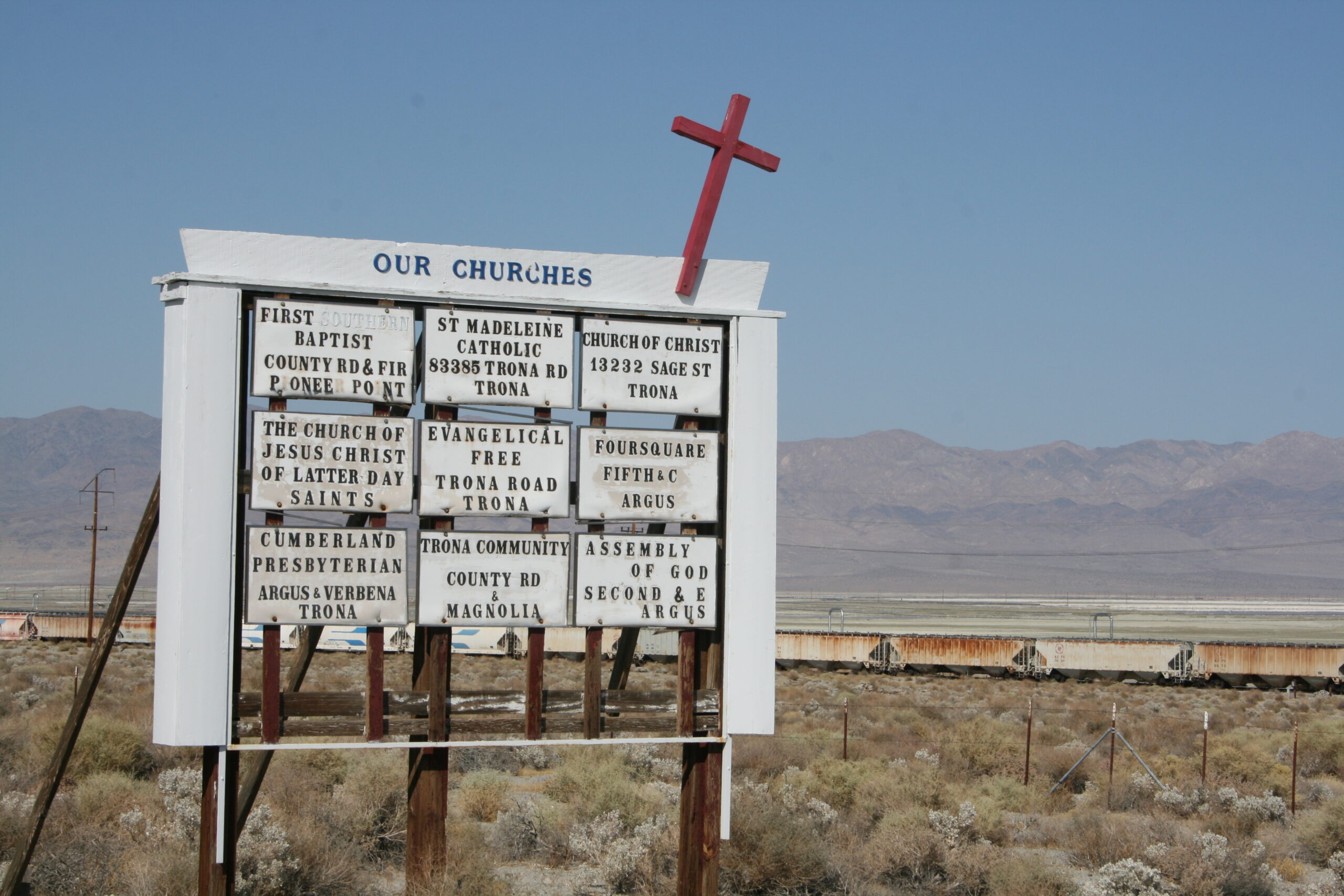 We continued toward Trona, a desolate town southwest of Death Valley comprised mostly of a mining and chemical processing plant and a handful of dilapidated homes and boarded-up businesses. So often, you can learn everything you need to know about a place by the signs posted in it. As we drove into town, we saw a large “Our Churches” sign listing no less than nine places of worship for the 1,900 people living in Trona. I wondered about the kind of place that would need a church for every two hundred residents. Another sign announced, “Salt Free Quality Drinking Water,” and I realized that it had never occurred to me to demand salt free drinking water before. We saw two separate signs reading “Museum” — with no explanation of what might be lurking inside them. A painted message below the scrambled “German American Emporium” sign let us know that the building, like so many others, was “For Sale” and “For Lease.” I wondered how the Trona residents were surviving without a steady supply of bratwurst, beer hall songs, and lederhosen. 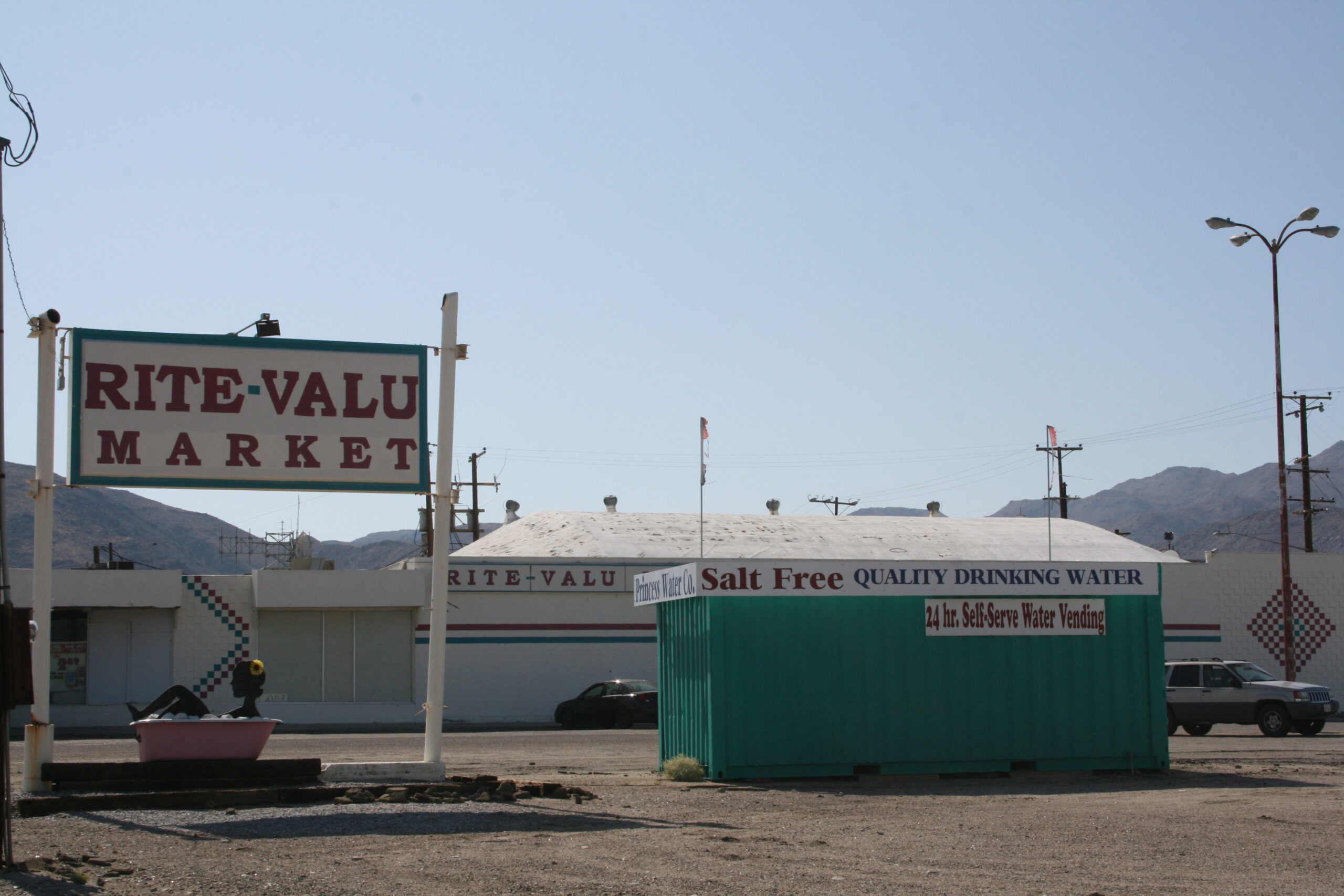 By the time we stopped at the Trails Drive In for milkshakes, I was brimming with questions for the girl at the counter. She was a recent graduate of Trona High School, the only high school in the country that plays football on a dirt field, due to the difficulty of growing grass in saline water and scorching heat. 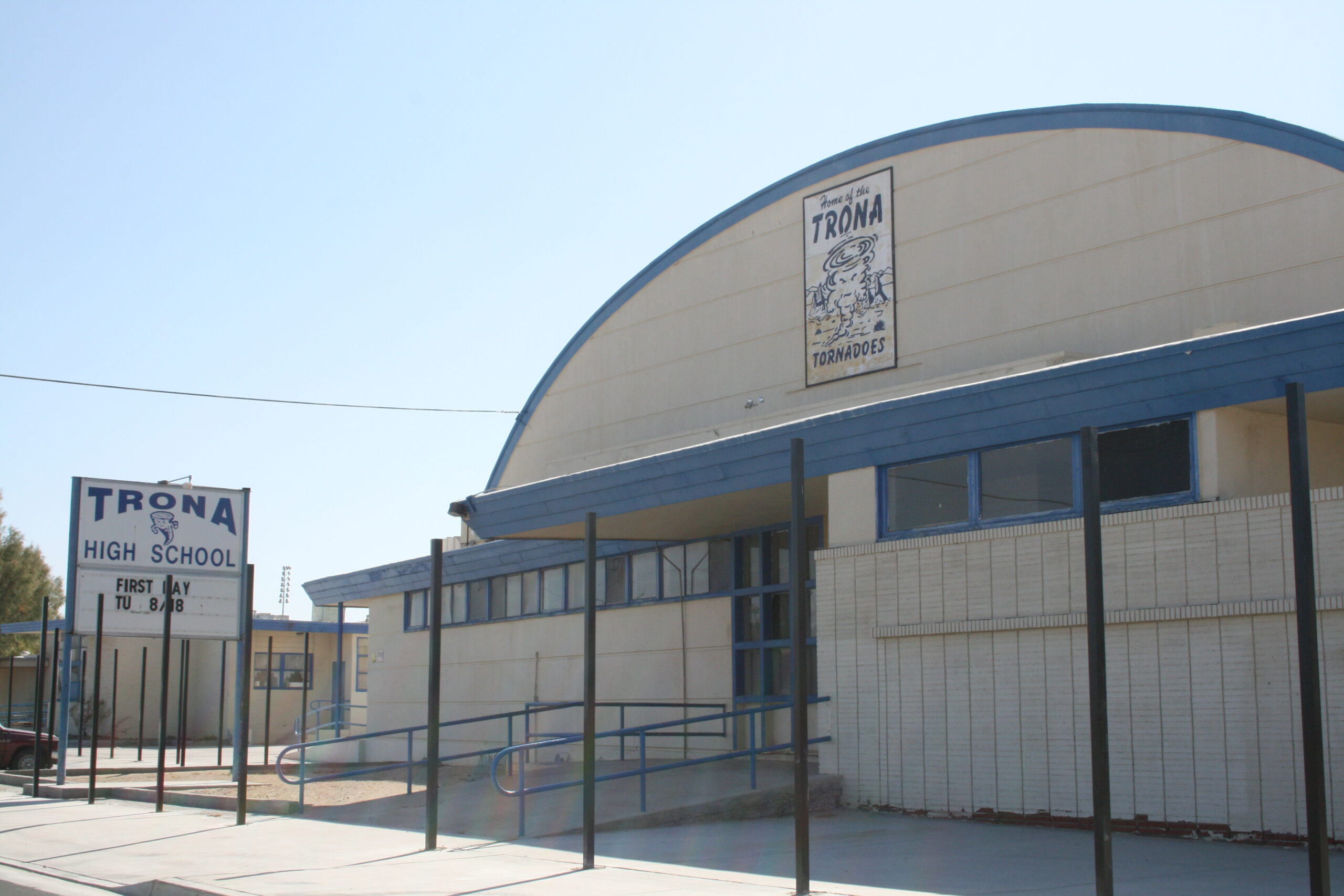 “What does Searles Valley Minerals do?” I asked her. “Where does the Trona Railroad go? What are the strange, upside-down U-shaped pipes in the desert? Where does Trona’s water come from? And can I have a banana milkshake?”

She looked at me as though I was the first person on earth to ask these questions, and she had no answers for me, except for a banana milkshake. It was delicious.

As I drank, she told me that there were only 25 people in her high school class.

“Well, I’m not really that kind of girl,” she said. Touché, I thought. “And only two of them were cute,” she said mischievously, undermining her point.

A man with a goatee sitting in the restaurant overheard our conversation and volunteered that the chemical company produces borax, soda ash, and salt and uses the Trona Railway to ship chemicals to other parts of California. He explained that Trona’s water comes from adjacent Ridgecrest, where it flows from desert mountain peaks. 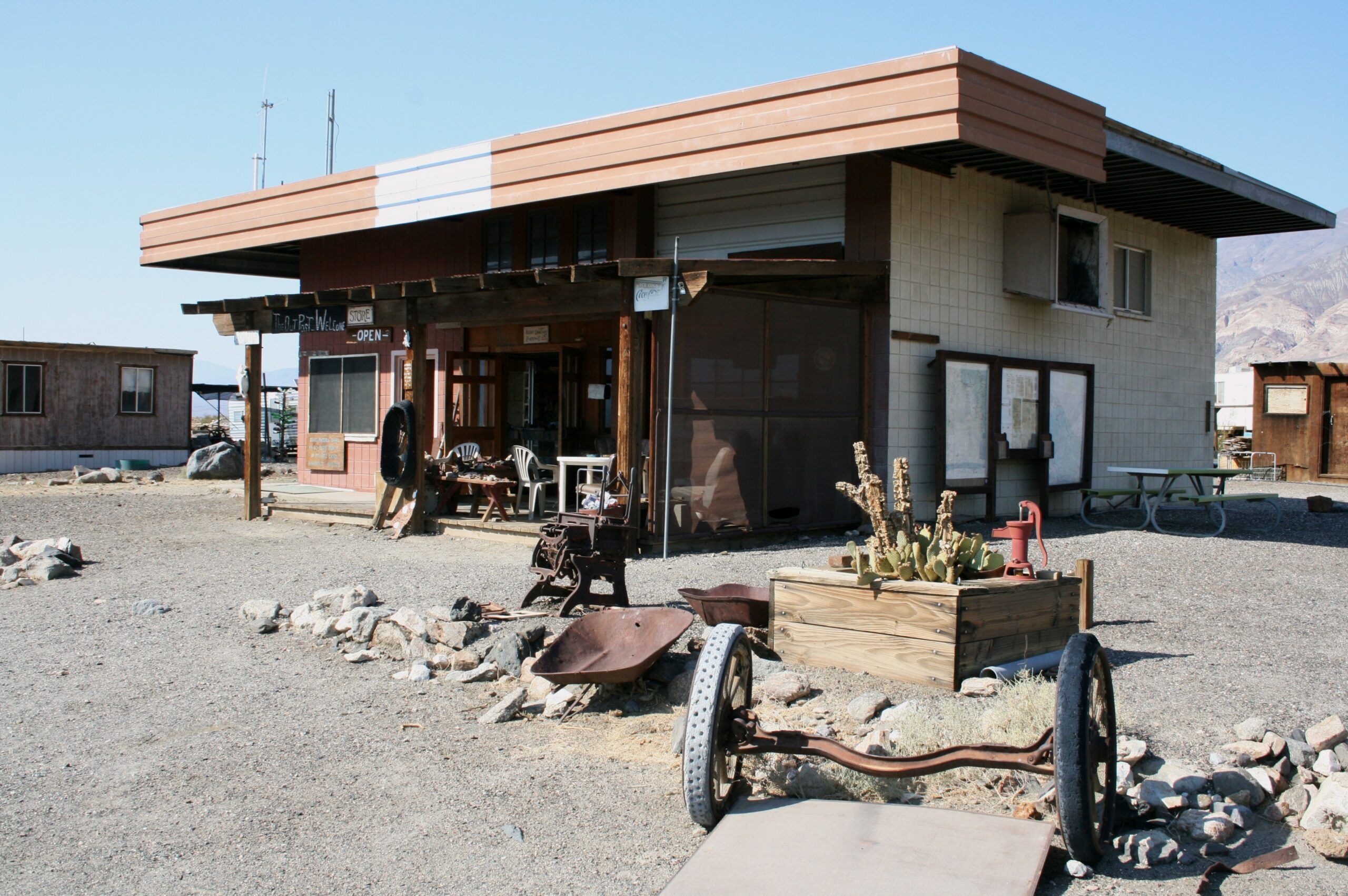 “Where are you guys headed?” he asked us. We told him that we had planned a hike in Death Valley.

“It’s too hot this time of year,” he said. He was the sixth person to tell us that August is the worst time to visit Death Valley, but we expected that Telescope Peak, the Valley’s highest point, would be much cooler and breezier than Badwater, the Valley’s infamously sizzling low point.

“I used to,” he said. “But then I got shipped away. Now I’m passing through again.”

I wanted to ask him what he meant, but when it occurred to me that his story probably ended in prison, we thanked him for the information and continued on to Mahogany Flat.

On the way, we stopped in Ballarat, a ghost town outside of Trona, near which Charles Mason and his followers lived before famously murdering actress Sharon Tate and her friends in 1969. The sign on the way into the town read, “You learn nothing by sitting in the car.” So we got out of our car. 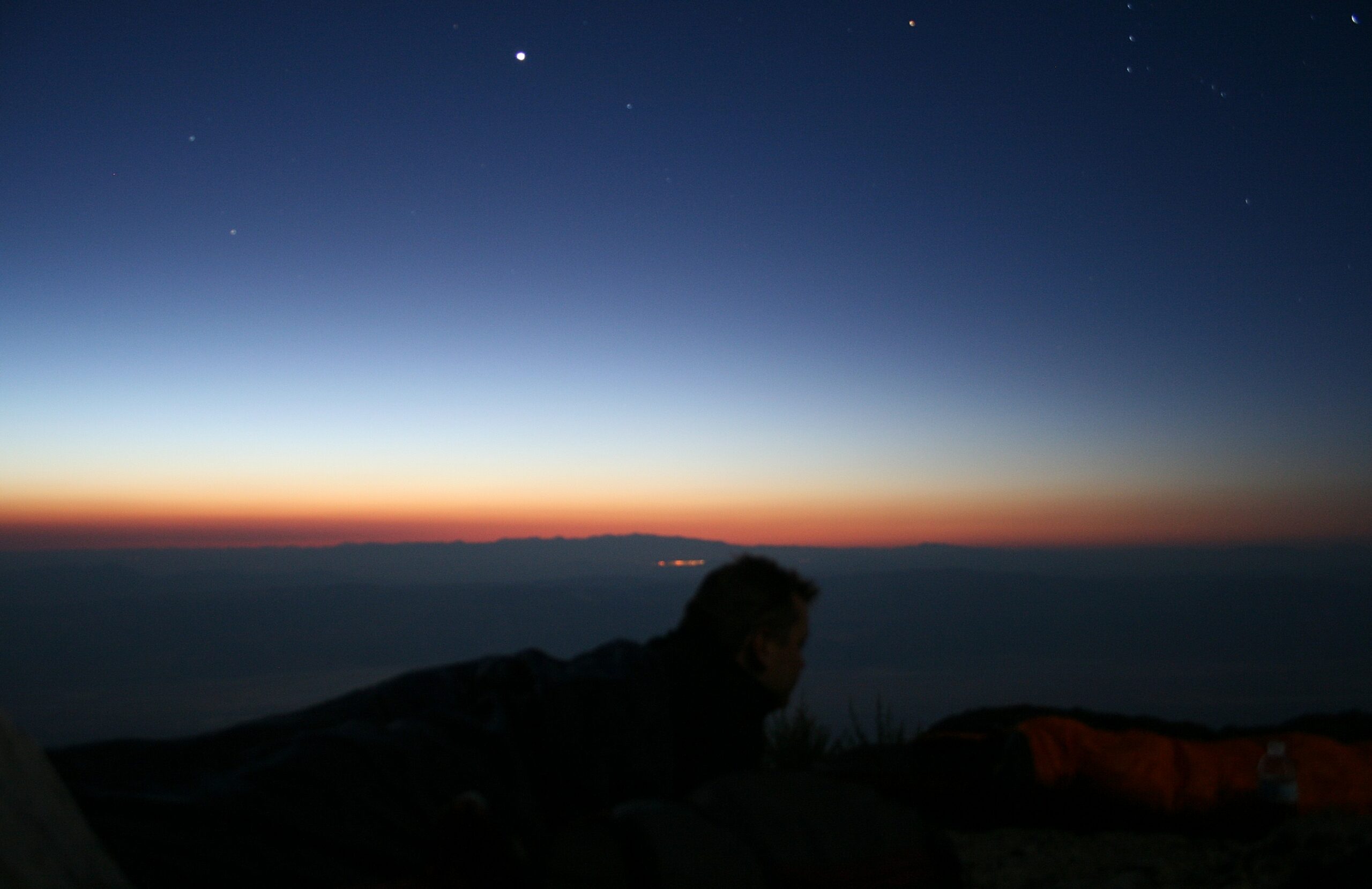 Rich watches the sunrise from his sleeping bag at the top of Death Valley’s Telescope Peak.

I introduced myself to Rock and George Novak, the town’s only two residents and caretakers. I noticed that they stocked their store with mostly car and motorcycle parts. They told me that in the winter, they sometimes get 200 visitors every day — people looking to go off-roading and camping in the nearby mountains. We explored the town a bit, in 100 degree heat and blinding desert sun. The heat was strange — it was so dry that it didn’t feel hot on my skin — but as I walked, it seemed to suck the energy right out of me. I started to worry that our Death Valley hiking plan wasn’t the best idea after all. 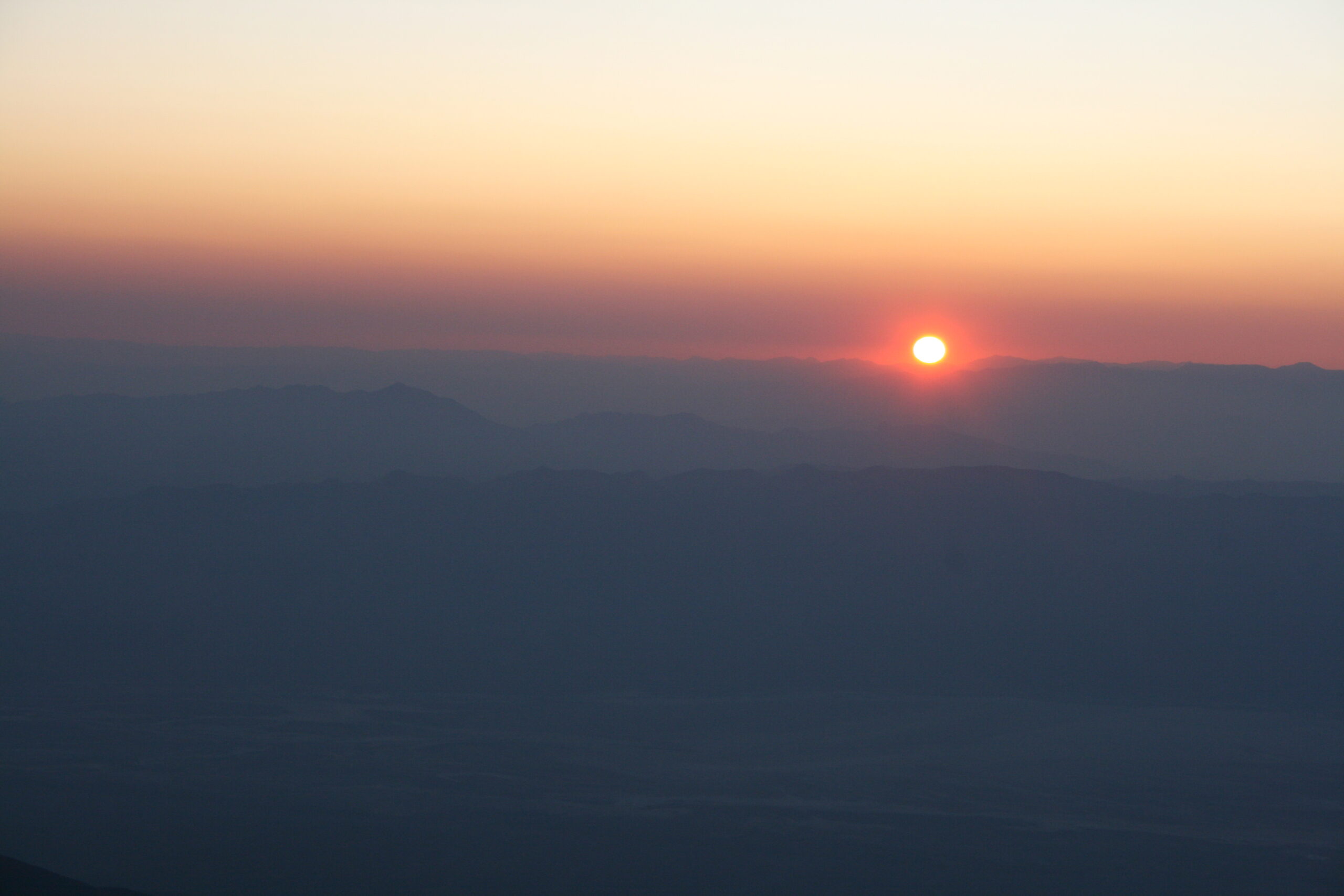 As we began walking back to our car, Rock stood up, pointed to an abandoned truck, and said, “That was Charles Manson’s truck.” When I looked back at him, trying to gauge his honesty, he looked like a hopeful fisherman who had just cast a line with fresh bait.

“I don’t have anything else to do,” Rock said as he reluctantly sat down again in the store.

Unable to get much more information out of Rock, we took some photos of the alleged Manson truck, then drove out of eerie Ballarat.

At Mahogany Flat, the man who appeared from behind a tree at our campsite turned out to be meteorologist Miles Muzio, a local TV celebrity in Bakersfield, California. He explained that he had organized a night hike, under the almost-full moon, to Telescope Peak. We had planned to do the hike after a good night’s sleep in our tents, and we told him that we weren’t part of his group. But as soon as he disappeared, Wendy and I looked at each other with our eyes twinkling. The idea of hiking to the top of the Peak in the moonlight seemed even better than our original plan. 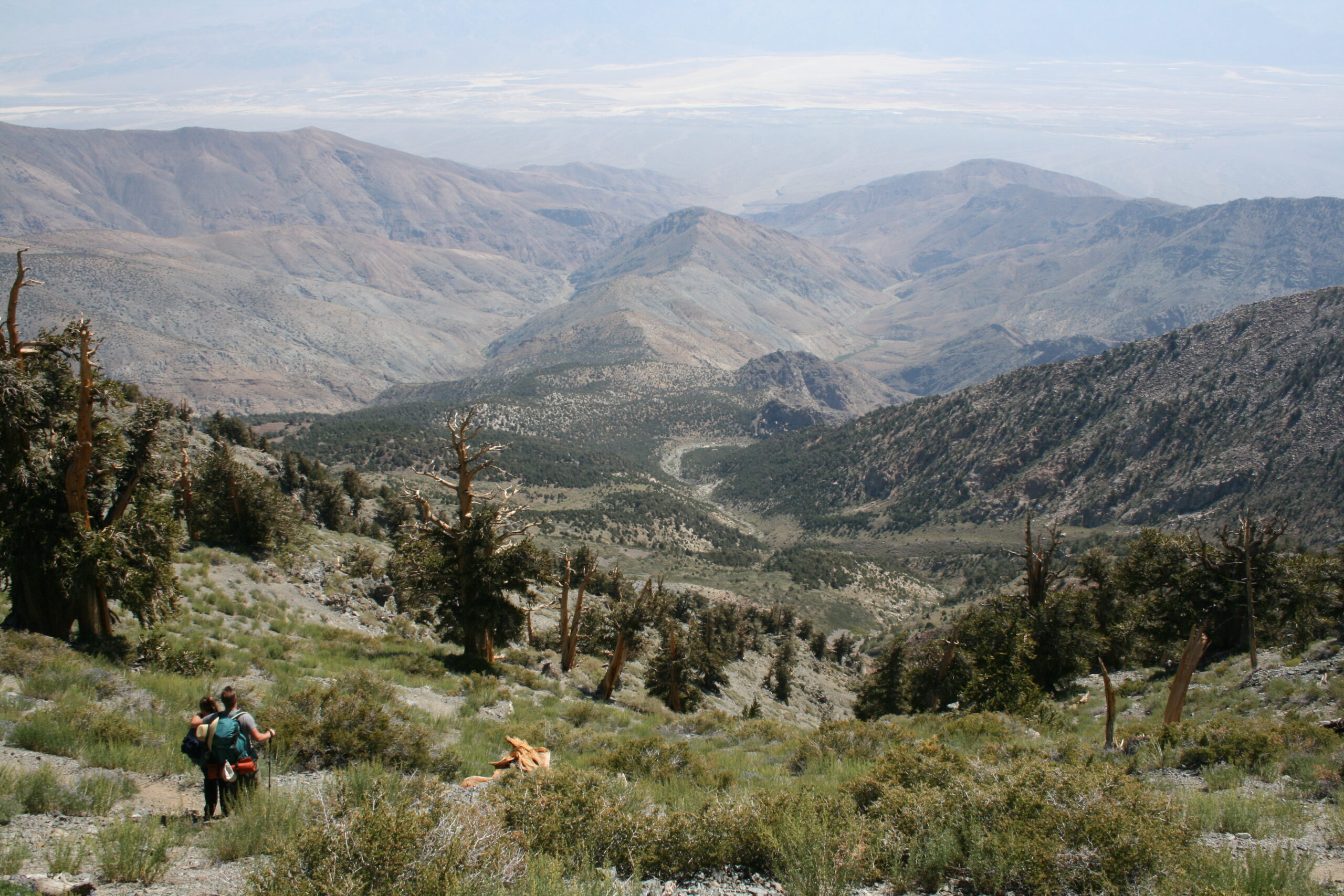 Hikers enjoy a view of Death Valley from Telescope Peak.

Rich was skeptical because we hadn’t packed the right clothing or equipment for a night hike with camping on the peak, but Wendy and I eventually convinced him. At midnight, the three of us set off to climb the seven miles and 3,500 feet from Mahogany Flat to Death Valley’s highest point in the moonlight.

In the dark, using only the almost-full moon to guide us, we trudged up the uneven, strenuous initial couple miles until we reached Arcane Meadows, a sweet, flat, two-mile treat sandwiched between the hike’s steep, challenging end caps. As we gained elevation, we began adding clothing layers — the desert certainly wasn’t too hot, but as we neared the peak, we wondered if we might freeze in the darkness. Two miles from the top, we found three hikers from the meteorologist’s group, huddled together under a blanket on a steep slope below the trail. The 13 precipitous switchbacks and cold wind at the trail’s end had been too much for them. 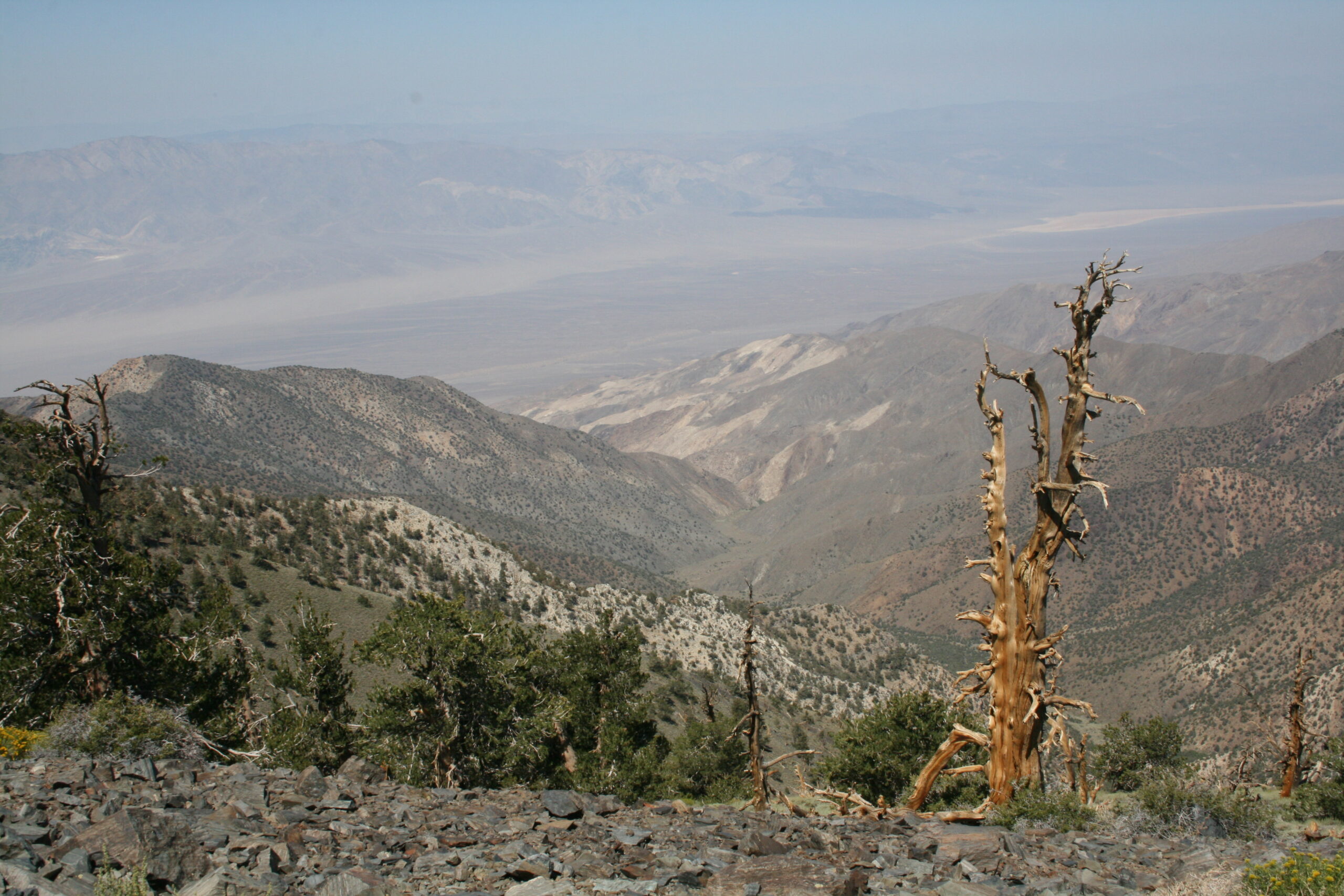 A parched tree teeters on the edge of a stunning Death Valley view.

After five hours, exhausted and loopy from the altitude, we reached the peak. The meteorologist greeted us, then bounded back down the mountain to help the blanket-covered hikers we had seen on the way. We looked out at the supposedly stunning view, which we had heard combined Mount Whitney (the highest point in the contiguous US) and Badwater (the lowest point in North America). But in the darkness, almost everything was invisible. 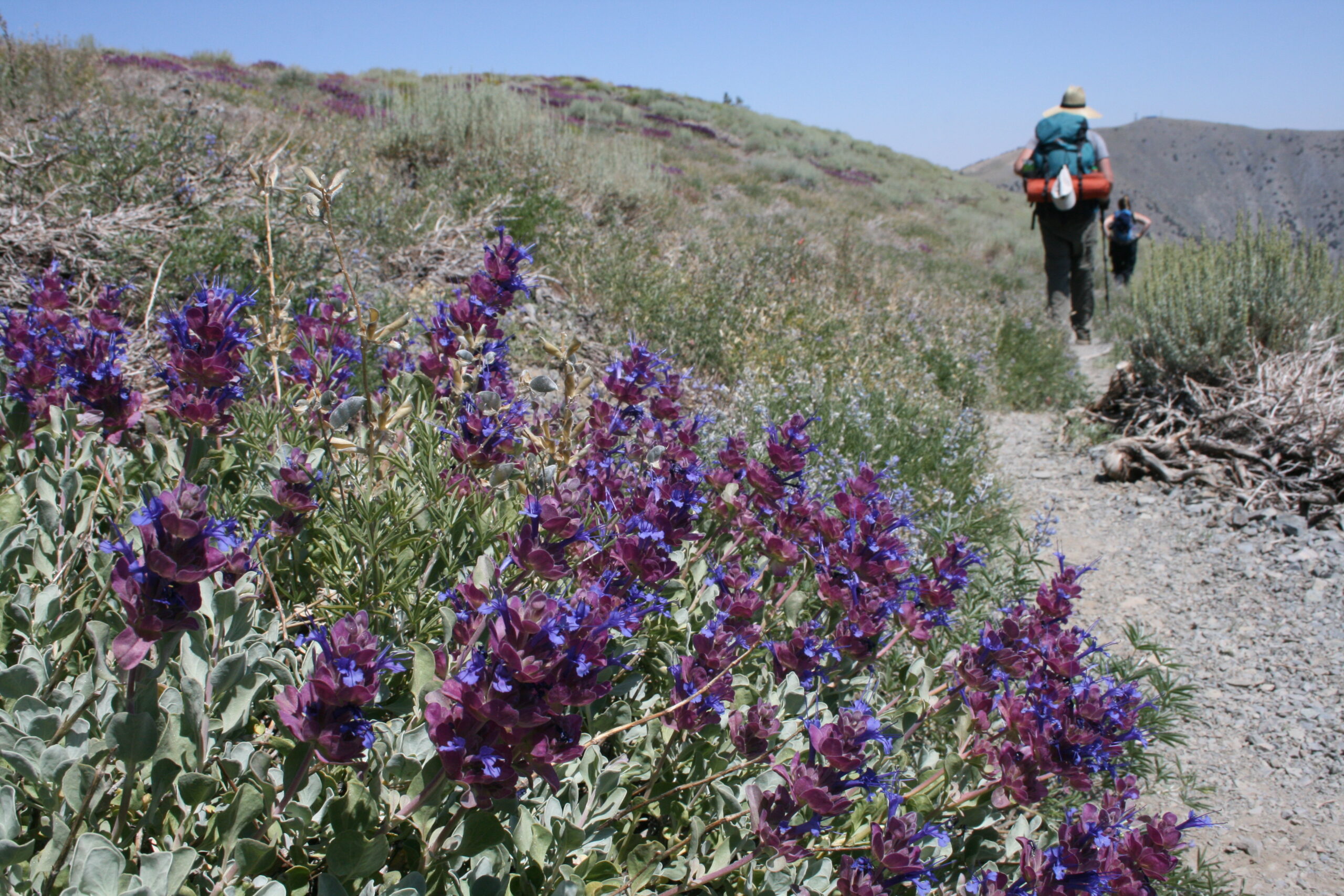 Chilled by the breeze on the peak, we nestled into our sleeping bags just as an amber glow appeared on the horizon. As we drifted in and out of consciousness, we watched the Death Valley sunrise from 11,043 feet.

The last thing I remember from that night was the golden desert sun, peeking out from behind the mountains east of Badwater. Then I fell asleep.

We awoke three hours later to an expansive view of Death Valley with severe desert crags and deep valleys surrounding us. We signed our named in the summit book, repacked our sleeping bags, and began the same hike again in reverse. With the newfound daylight and panoramic desert views, it was as though we had never done it before.

How to Hike Telescope Peak and Visit Death Valley

Telescope Peak is a 12.4-mile hike roundtrip and takes about eight hours (five hours up and three hours down). It can be done as a strenuous day hike or an overnight trip. Fit hikers can handle the walk from early May to mid-November, but in the winter, climbers will need ice axes and crampons.

If you plan on camping overnight near the top, bring headlamps, plenty of warm clothing layers, gloves, and a hat — it’s cold up there. Either way, you should bring snacks and a meal to eat at the summit. There is no water at the Mahogany Flat campground or on the trail, so be sure to carry at least four liters of water per person during the hike and bring some extra in your car in case of emergency.

From Los Angeles, take I-5 North to CA-14 North. After about 114 miles, turn right on CA-178 toward Inkoyern. Follow CA-178 East, and you will drive through Inyokern, Naval Air Weapons Station China Lake, Ridgecrest, and Trona. After Trona, you will see a sign for the Ballarat ghost town and a dirt road on your right. Continue on, and at the only major junction, follow CA-178 to the right to Wildrose. At the Wildrose stop sign, turn right and drive to the Charcoal Kilns. If you have a low clearance vehicle, park here — otherwise, you can take a high-clearance vehicle on the rocky road for 1.5 miles to Mahogany Flat.

The campsites at Mahogany Flat are free and cannot be reserved. This is the last location with toilets — beyond here you will have to bury your excrement. You can camp overnight here, or you can camp near the top of Telescope Peak if you prefer to do the hike over two days. Hiking to the peak during the moonlight is best done with a full moon, but it can be done safely with headlamps. The trail is well-maintained and easy to follow during the day and night.

If you can make it through the first two uphill miles of the hike, you’ll love the next two flat miles until you reach the final two, which comprise 13 steep switchbacks near the summit.

View the route below or download the Without Baggage Telescope Peak GPS track in GPX format.