A desert sea at the world’s end

The Salton Sea is an ocean in the middle of a desert, and it's not the only sign of the world's end there.

MAY 8, 2008 — On the shores of the Salton Sea in eastern California, dead fish, twisted concrete rebar, and dilapidated office chairs dot the sand. In the water, a lone electrical pole stands, with wires connected to nothing, yet useful to a seagull that has repurposed it for its perch. A collapsing wooden walkway stopping abruptly in mid-air, leading to nowhere and a decommissioned utility meter are the only clues that a house once stood on this shore, until, apparently, the Sea swallowed it whole. 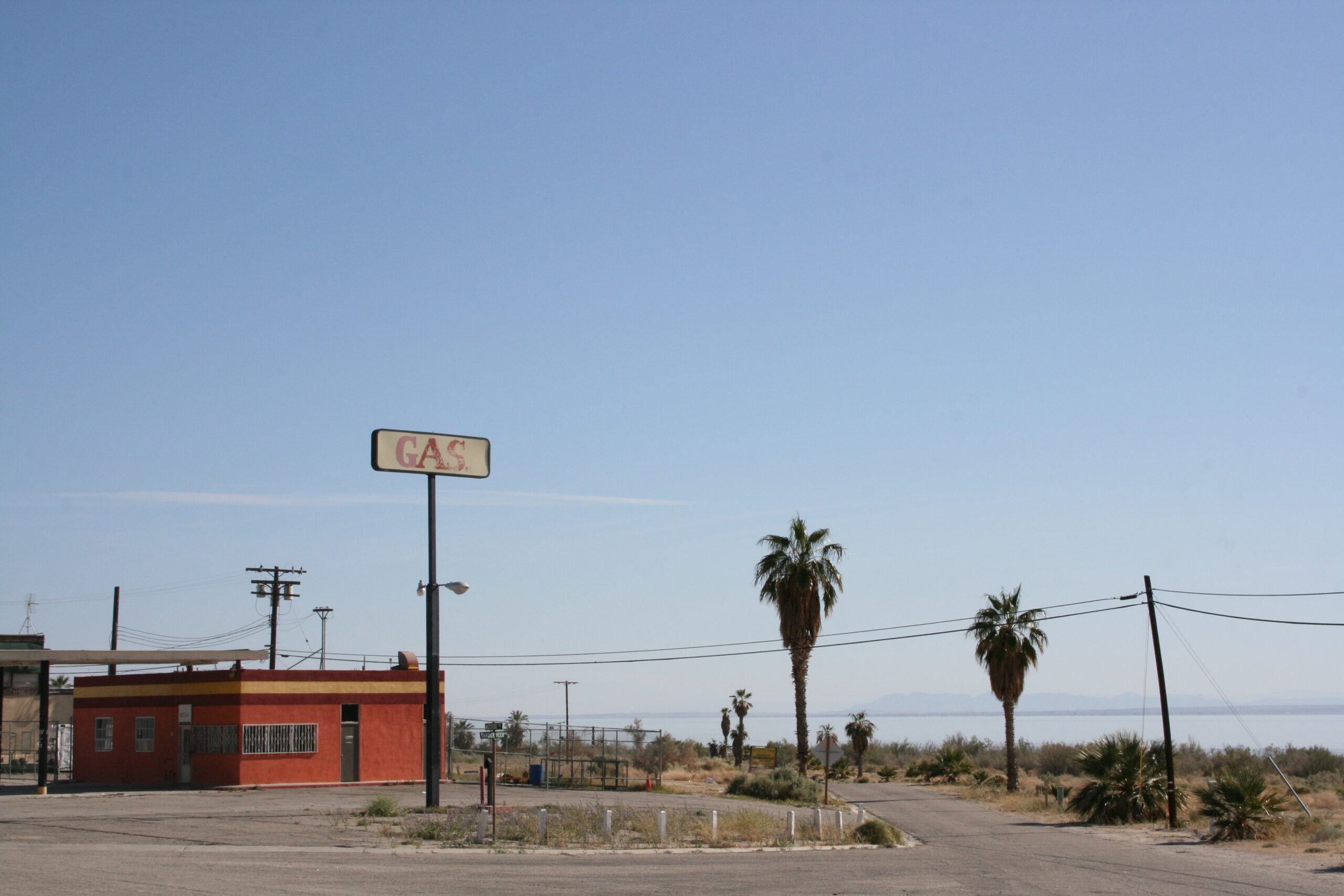 Near the beach, a faded, terse “Gas” sign with red-lettering falsely lures motorists to a shuttered box of a building, and the Corvina Cafe, with a crumbling, simple “Cafe” banner, sits boarded up, with two used tires in the parking lot as its only visitors. On the side of the gloomy restaurant, someone has drawn an eerie illustration of a man’s head attached to a chicken’s body, and it’s hard not to wonder if it’s some kind of sign, meant to warn us all of a sinister end. The buildings look like places that served as final outposts, filling tanks and bellies, before an unexpected apocalypse.

Standing among dead fish remains and peculiar green-yellow algae on the Sea’s shore, looking out at a shimmering azure abyss of salt water strangely positioned in the middle of the California desert, I felt like I’d reached the end of the world.

Aside from a few RVs sparsely dotting the cliffs above the Sea, I hadn’t see another person until three local twelve year-old kids arrived behind me on bicycles, throwing rocks into the water and foraging for treasures in the strange, gray sand.

“Is there anything else for me to take pictures of around here?” I asked them.

“My foot,” one of the kids responded. His friends laughed. Immediately, he realized the disrespect inherent in his answer and began to try to make up for it by telling me about beaches along the coast, but he had already made his point. 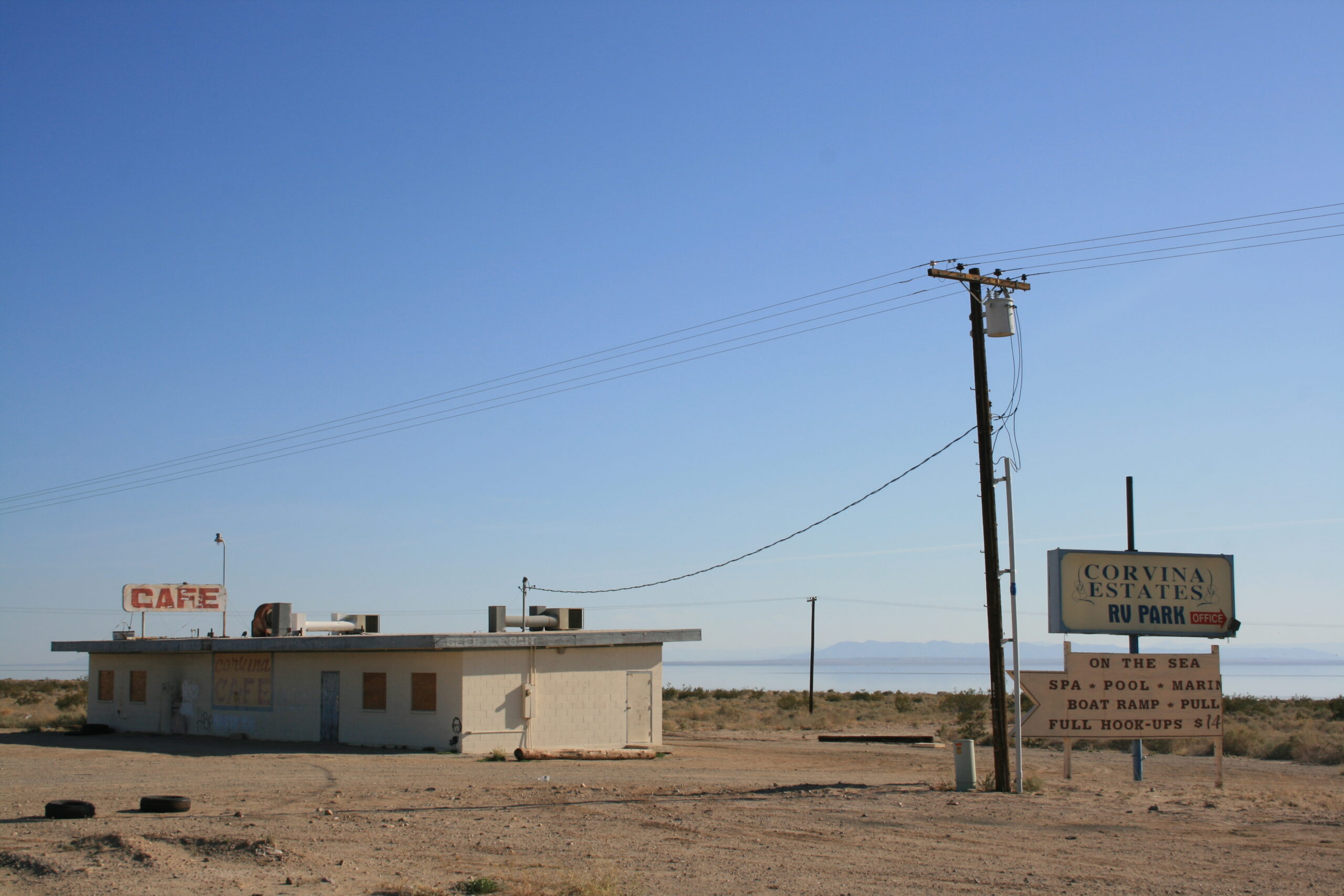 He’s not the only one feeling that sentiment. The Visitor Center was closed when I arrived (it’s only open in the summer on Friday, Saturday, and Sunday), but according to the Salton Sea State Recreation Area’s web site, the Sea originally formed as a result of California River overflows flooding the Salton Sink, though now, agricultural runoff keeps the basin filled. The 376-square-mile Sea, which is the largest lake in California, used to be so popular that until the mid-1980s, more people visited it than Yosemite National Park. But today, with bird and fish die-offs, increases in salinity, and concerns about agricultural pollution, the Sea is practically deserted. 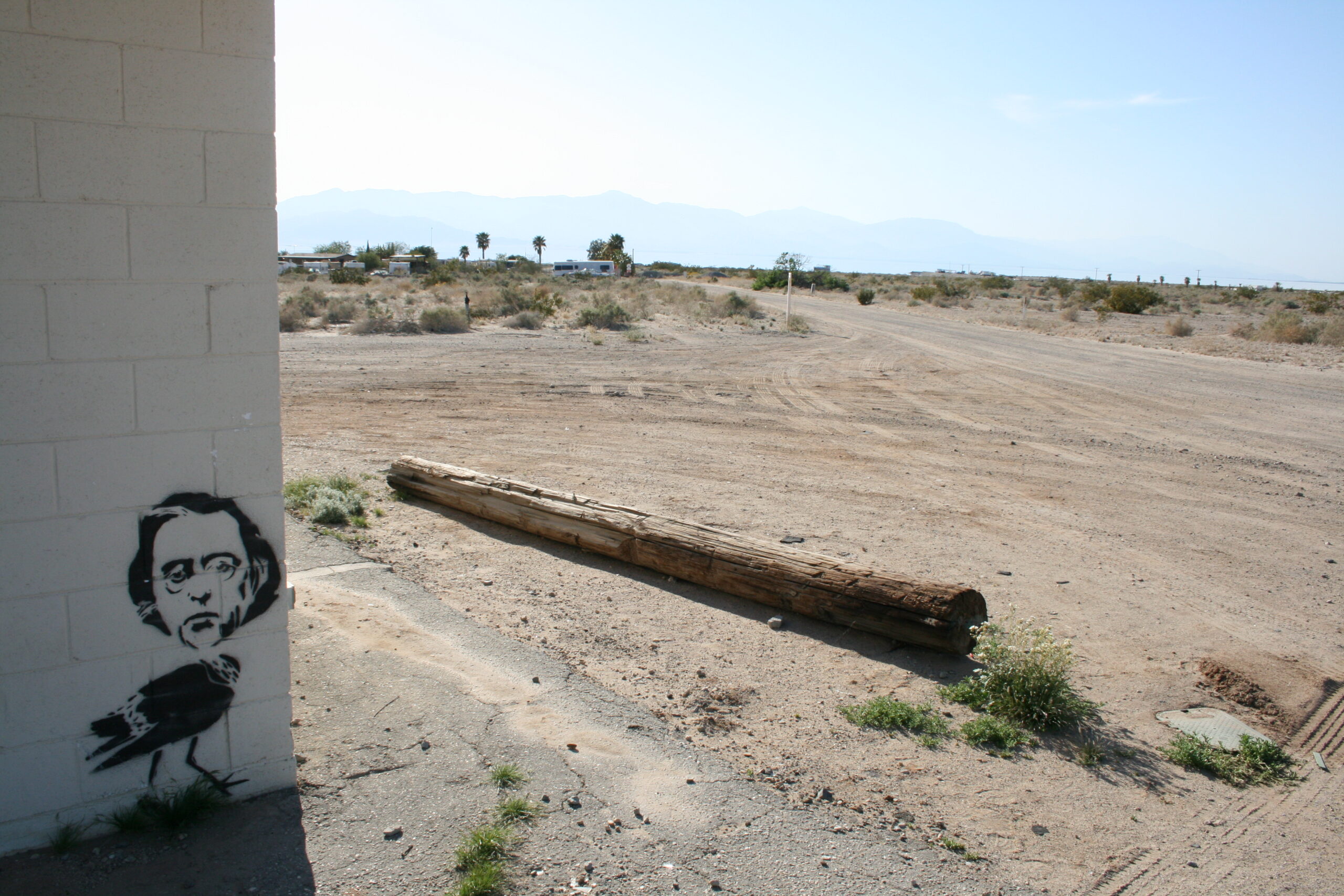 After talking to the kids some more and taking photographs as I walked along the shore, I jumped back into my car and drove along the edge of the water for awhile, enjoying the supernatural view and the desolate road. As I drove, the strange quiet of this ocean in the desert brought a bizarre tranquility to my trip.

Soon, a sign warned me that I was approaching Niland, a small town about 42 miles north of the Mexican border. Niland is easy to miss; I know, because on my first attempt, I accidentally drove through it without noticing or stopping. On my return trip, I drove more slowly and saw a few buildings, two signs touting Niland’s Tomato Festival (I missed it; it was in February), and “Mi Castillo Magico,” a supposedly magic castle that apparently wasn’t magical enough to avoid the same fate as “Gas” and the Corvina Cafe.

Having seen all of Niland, I started driving back in the direction of the Sea. On the way, an immigration officer stopped me at a checkpoint. He seemed suspicious.

“Is this your car?” he asked. Using every ounce of my will to avoid responding sarcastically, I told him that, I was undeniably driving my own car, alone. Then, he asked why I had visited Niland, and I explained that I had come to see the Salton Sea.

I wanted to tell him that he was wrong. The eerily beautiful end of the world is indeed something to see.