DECEMBER 11, 2010 — Meandering museums, charming cathedrals, primeval palaces, grimy guesthouses, and deceitful taxi drivers: the ever repeating stream of traveler staples can exhaust even the most wide-eyed tourists. Jaded travelers who think they have seen everything are always hungry for something astonishing — something genuinely different.

This past Saturday, my brother and I decide to go looking for this, in a place called Dakshinkali, Nepal. Twice each week, on Tuesdays and Saturday, Nepalese families travel to this small village, 45 minutes outside of Kathmandu, to perform mass animal sacrifices — with uncastrated male animals like buffaloes, goats, sheep, pigs, and chickens — in front of a statue of Kali, the six-armed Hindu goddess of time and change. Kali, whose name means “the black one,” is Hindu deity Shiva’s bloodthirsty companion, said to be a ferocious slayer of evil. According to legend, Kali looks after those who satiate her bloodlust by bringing wealth to the poor, revenge to the persecuted, and children to the infertile. Two hundred years ago, worshippers sacrificed a human boy every day at a Kali temple in Kolkata, India, but today, of course, human sacrifice is illegal and animals must suffice. (Nevertheless, a three-year-old and 15-year-old boy were hacked to death illegally by their parents in a secret ceremony for Kali in India as recently as 2002.) 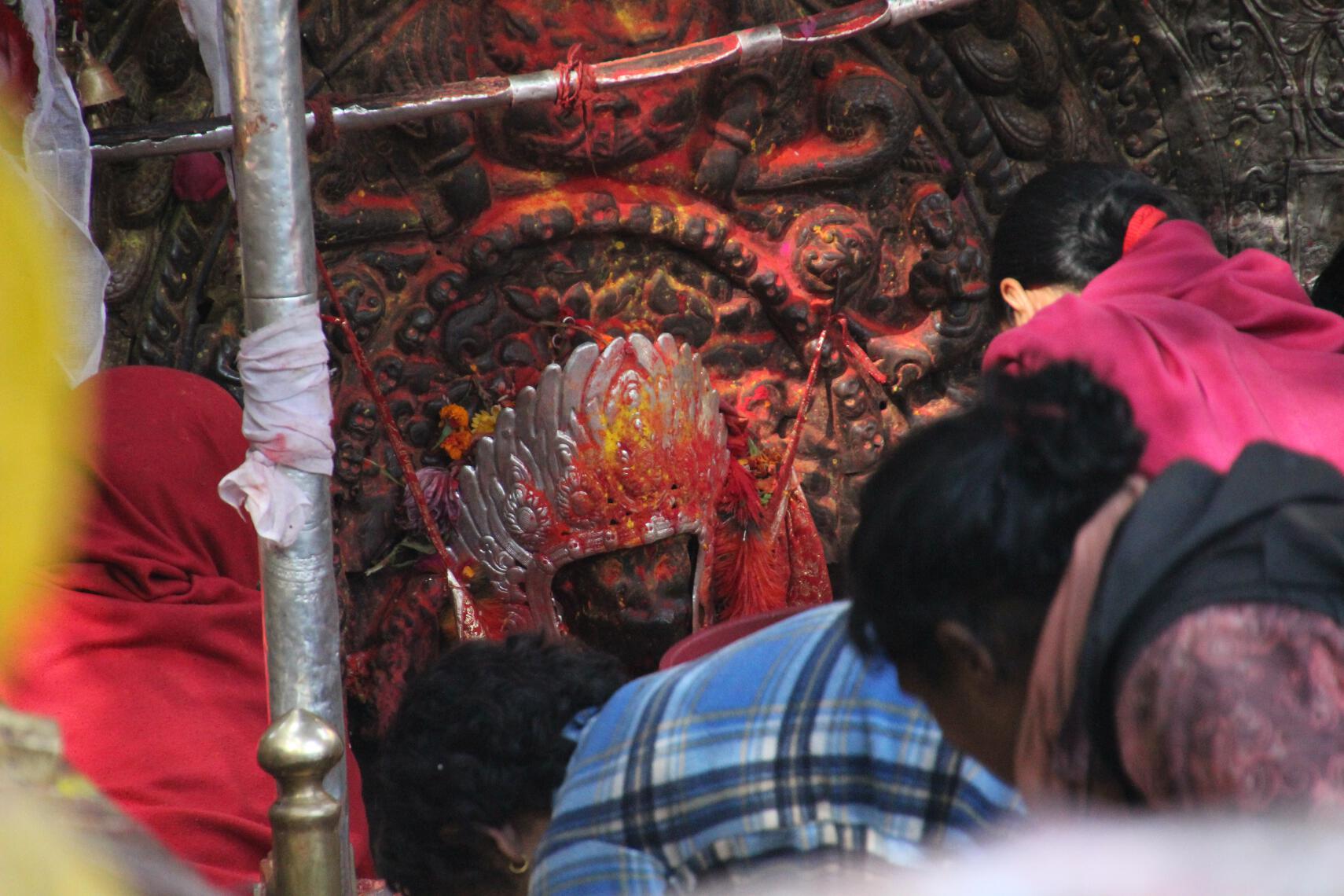 Nepalese worshippers bow before a blood-soaked statue of Kali.

After taking a taxi from Kathmandu to Dakshinkali, Brian and I make our way through a maze of peddlers selling local food, tea, and kitsch, as well as flowers, chickens, and goats, to offer to the goddess. As we fend off the hucksters, we consider buying a goat to make our own offering to Kali, but we decide to survey the entire process first before committing to such a high-maintenance purchase. 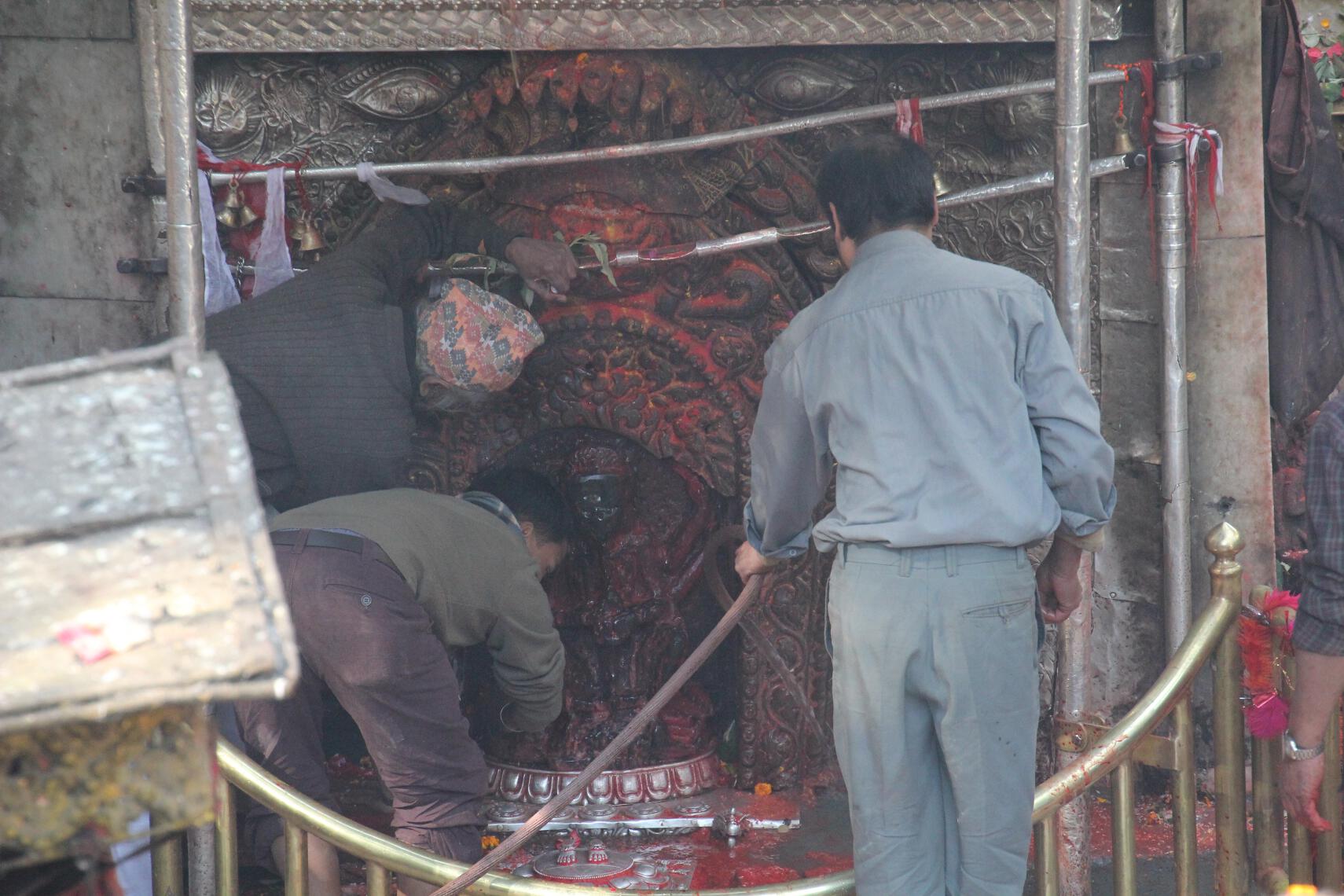 Workers clean the blood-covered statue and temple of Kali.

When we finally arrive at Kali’s “temple,” we’re surprised to discover not a huge towering marble building housing a 100-foot ivory statue, but, instead, a small, 15-foot-square, concrete-enclosed area with a two-foot metal statue of Kali. And though we expected to see decked-out clergy making a dramatic show of the sacrifices, we instead see a couple young guys in hoodies standing in a sea of blood, unceremoniously twisting chicken necks and slicing off goat heads. The process, though simple, is drawn-out: hundreds of Indian families stand in line for hours, waiting to get their turn, about 20 at a time, to pile into the area around the statue and have their sacrifice performed. After the sacrifice, they make sure to smother chicken and goat blood on both themselves and the statue, after which the men in hoodies hurry them out of the temple to make room for more worshippers. The proud, new owners of dead animals then drag their kill to a nearby, blood-filled stream to butcher and prepare for a feast. Every hour or so, like the Zamboni during halftime at an ice hockey game, the process comes to a halt for about 45 minutes to give custodians a chance to clean gallons of blood off the floor and statue. 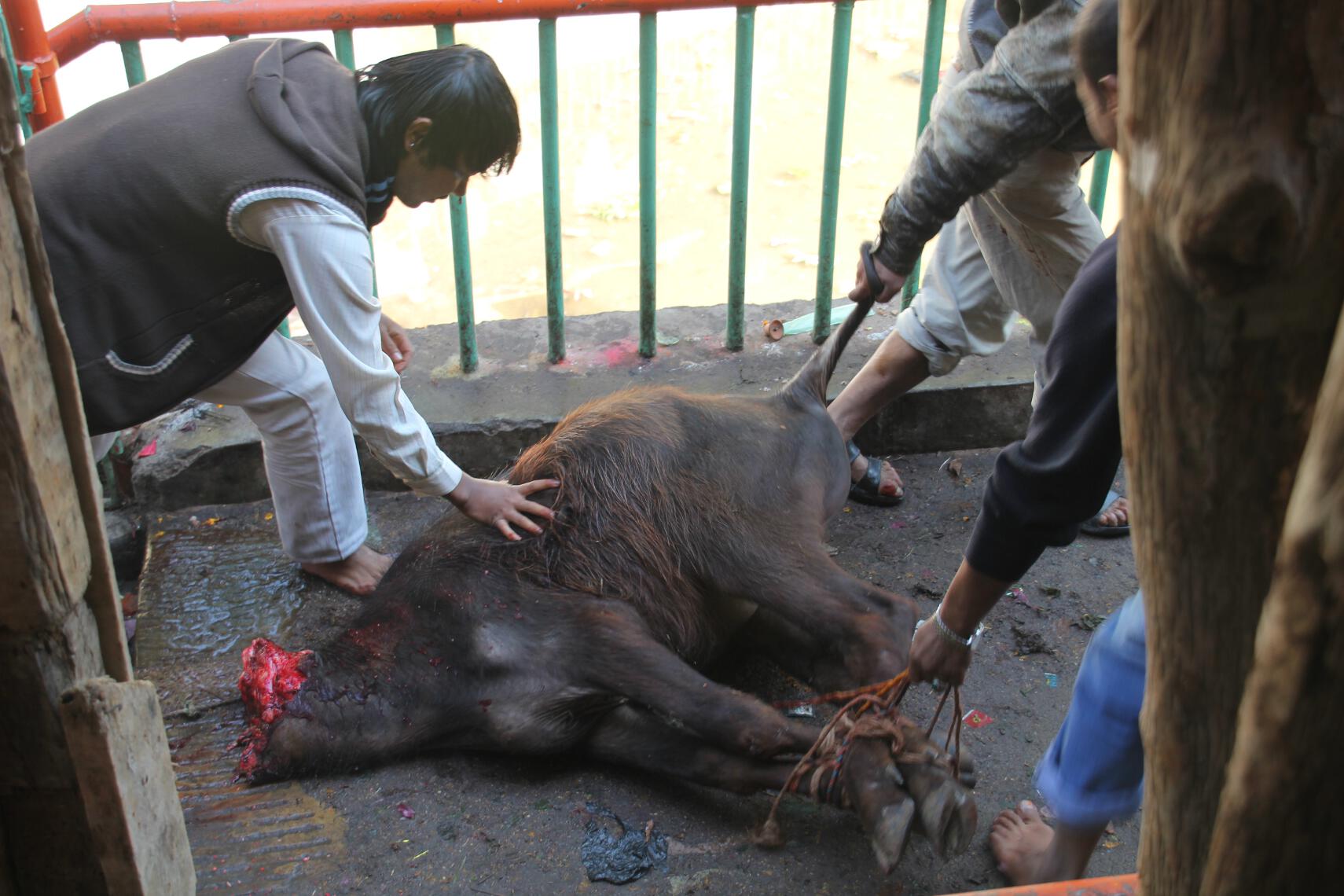 A family drags a beheaded bull from Kali’s temple to be butchered and roasted.

“Well, should we buy a goat to sacrifice?” I ask Brian, just as we see an enormous bull decapitated in front of our eyes and dragged down a stone walkway. We see a sea of crimson below us.

“I think enough chickens have died for our entertainment today,” Brian responds, sounding sick. After all, it’s not every day in the Western world that you see a mass of animals slaughtered in service of a Hindu god. 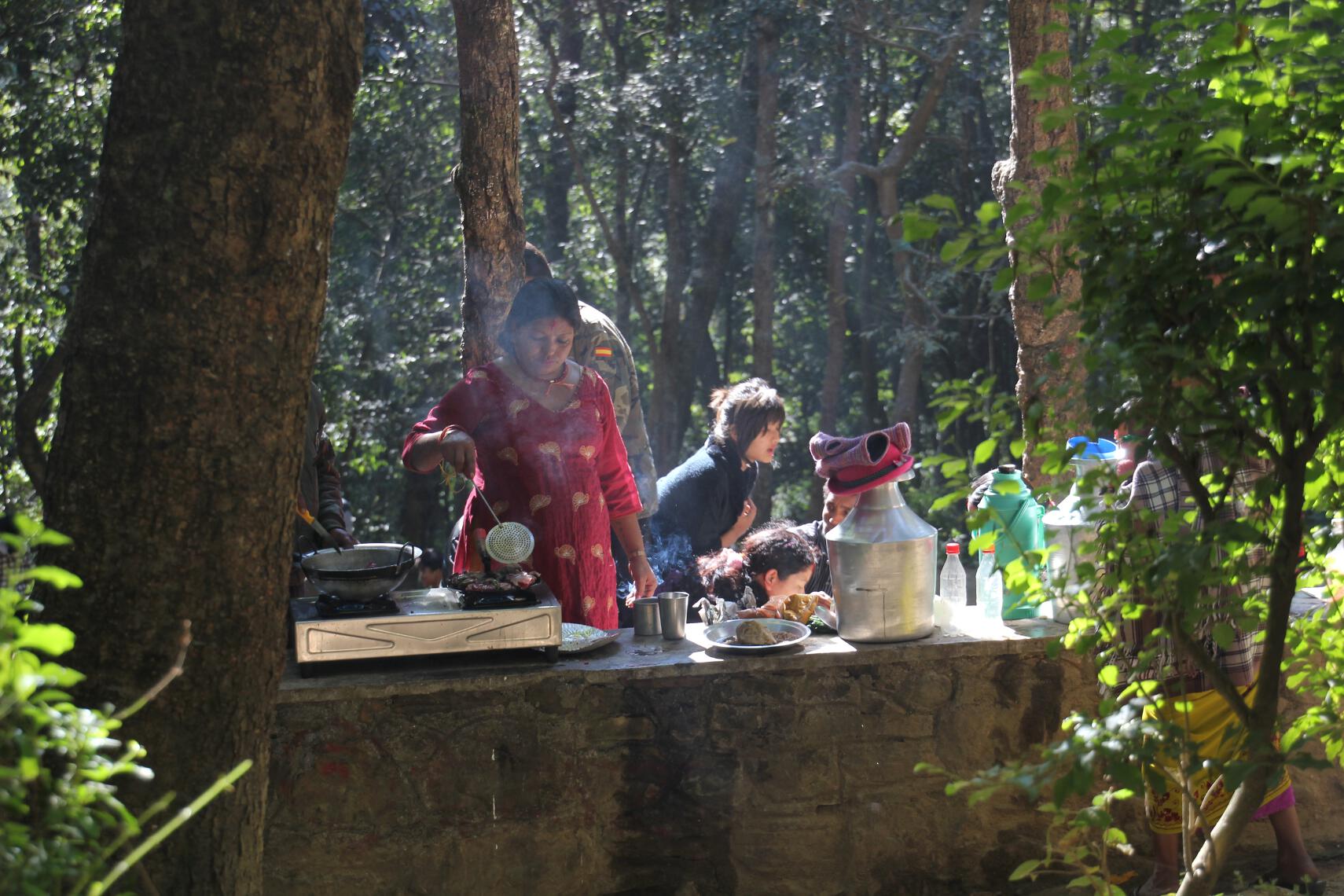 A Nepalese family roasts meat for a picnic following a sacrifice to Kali.

After gawking at the spectacle for over an hour, we walk to the park that surrounds the temple. The smell of roasting flesh fills our nostrils, and we catch glimpses of men cooking huge goats and chicken on open fires. When we arrive in the park, we’re greeted by a collection of extended Indian families, roasting meat, readying for big feasts. We watch the families dance to Nepalese music, celebrating the occasion.

On one hand, the spectacle at Dakshinkali is shockingly unusual. But it’s hard to judge Nepalese families for wanting to spend a day out together, barbecuing.

“I guess it’s not much different from going to the supermarket to buy a picnic of beer, hamburgers, and hot dogs to bring to a lazy Sunday in Central Park,” Brian notes. “Well, you know, if there were a place near the Central Park’s Wollman Ice Rink where you could have someone slaughter a cow and pig for your barbecue.”

How to See Mass Animal Sacrifices in Dakshinkali, Nepal

OVERVIEW: Dakshinkali is a small village about a 45-minute drive from Kathmandu, Nepal. Animal sacrifices occur on Tuesdays and Saturdays and start early in the morning, though we arrived at around 10 AM and the lines into the temple were still many hours long. Officially, tourists are not permitted to enter the temple but may watch and photograph sacrifices from outside. (There are some adequate viewpoints on raised steps adjacent to the temple.) Nevertheless, the event is so chaotic that anyone who buys a goat or chicken and waits in line will almost certainly be admitted to have a sacrifice performed.

LOGISTICS: Fly to Kathmandu, Nepal and ask a taxi driver to take you to the Dakshinkali temple on a Tuesday or Saturday morning (Saturdays are supposedly more popular among Nepalese families). It’s a long drive, but you should be able to get a round-trip ride for about 300 Nepalese rupees (US $4). You may also choose to take a 15 rupee bus from the Shahid Gate or City Bus stations. The trip can also be a scenic two hour, one-way cycling trip from Kathmandu if you have a mountain bike. Once you reach the hilltop, follow the maze of vendors until you reach a long line leading to the temple full of people holding flowers, chickens, and goats. Tourists who only want to take photographs need not stand in line — simply walk past the hordes and down the steps.