Rural Washington is both beautiful and buggy.

MAY 2, 2006 — Windshields must be exceptionally tasty. I’ve never tried eating one, but as I drove through the Yakima Valley in central Washington this past weekend, bugs flocked to mine as though I were running an all-a-bug-can-eat windshield buffet. Inevitably, the problem with a windshield bug buffet is the inherent danger it presents to its customers — at almost exactly the same time a bug gets close enough to get a delicious windshield-glass lick, the bug is squashed by the same windshield moving toward it at seventy miles per hour. Nevertheless, the promise of a windshield’s heavenly scrumptiousness has proven repeatedly to be too much to bear for the Valley’s bugs — driving across central Washington gave me a windshield covered in white bug gunk more than once.

My friend Christine and I drove across the Yakima Valley to visit Hells Canyon, North America’s deepest canyon, which sits five hours east of Seattle at the intersection of Washington, Idaho, and Oregon. In the beginning, I thought of the Yakima Valley as an irritating desert lengthening the trip between my origin and destination. Yet travel’s biggest cliche again held true during my drive: half the fun was indeed the (picturesque) trip there.

While only eight inches of rain fall in the Yakima Valley each year, farmers use the Yakima and Columbia Rivers to heavily irrigate their fields. As a result, the Valley is the single largest producer of apples in the world and cherry trees are also common. For tourists from Seattle, the area’s 300 days of sunshine per year is more than enough of a reason to explore.

The drive through the Valley treats travelers to an astonishing array of spectacular scenery: lush, green fields of asparagus, flowery, billowing tracts of fragrant cherry trees, expansive pastures dotted by grazing cattle, barns with “Go Cougs” painted in bright, red letters on the side (the cougar is the mascot of local Washington State University), and treacherous mountain roads through the desert. Consequently, my windshield’s bug gunk was a particularly annoying problem as it put a layer of crushed bugs between me and the scenery.

We stopped in Othello for dinner, a tiny farm town filled with Mexican restaurants — nearly forty percent of the local population is Mexican and Latin American due to the area’s abundance of orchard work — and farm equipment stores. After I self-consciously parked my two-door coupe next to an array of huge pickup trucks, we ate at the Broken Antler Bar and Grill which proudly displayed inside (surprise!) a deer head with a broken antler and outside a hand-painted sign reading “Kingdome East.” Apparently, news of the destruction of Seattle’s Kingdome in the year 2000, making room for Qwest Field and Safeco Field, hasn’t made it to Othello’s sports fans yet.

After a quick stop at Othello’s “Old Hotel Art Galley” — which turned out to be a well-signed but closed, run-down house with no hotel, art, or gallery in sight — we found our way to SR-261, a twisting mountain-pass that gives drivers a James Bond experience, complete with terrifying high-speed cars passing on precarious mountain edges. If you’re ever traveling on this mountain road past Starbuck (no relation) to sister cities Clarkston, Washington or Lewiston, Idaho (yes, they’re named after explorers Lewis and Clark), bring the most fun car you can find.

If there were bug repellent for windshields, I’d suggest bringing that too.

Why isn’t there an apostrophe in Hells Canyon?

MAY 4, 2006 — Apostrophes are the single most misused character in the English language. No one seems to know when to use them and when to avoid them. Everyone knows that apostrophes come in handy to denote possession, as in “Hank’s travel blog” and “the car’s headlight,” and most understand when to use them for word contractions, as in “don’t” and “isn’t.” Maddeningly, the common-sense consensus ends there.

Some people (incorrectly) believe that apostrophes can be used to pluralize acronyms and numbers, as in “CD’s” and “the 1980’s” — “CDs” and “the 1980s” are correct. Sometimes, people go a step further and incorrectly use apostrophes to pluralize all words, as in, “Banana’s for sale!” — “Bananas for sale!” is correct. In short, apostrophes should not be used to pluralize words. (There are a tiny number of exceptions, such as, “Mind your p’s and q’s,” but these situations are too rare to seriously consider when trying to decide whether an apostrophe is appropriate.) Others haphazardly add apostrophes to any proper name ending in the letter “s,” as in the rock band “The Killer’s” and “the William’s family” — “The Killers” and “the Williams family” are correct.

In some cases, even professional writers don’t agree. When a proper name ends with “s,” should its possessive version have only an apostrophe or should it have both an apostrophe and additional “s” — e.g. “the Williams’ car” or “the Williams’s car”? I strongly prefer the latter example because doing so is more consistent with other apostrophe rules, and the phrase is usually pronounced with an extra “s.” Most grammar guides agree, including the English-language gold-standard The Elements of Style by Strunk and White, but I’ve seen some guides, writers, and grammar teachers use the former.

Probably most controversial is the ongoing confusion over “it’s” and “its” and “your” and “you’re,” mistakes that have become such common pet peeves of language purists that I’ve had pretentious colleagues tell me they watch for them to separate the educated from the uneducated and unintelligent. For the uninitiated, “it’s” and “you’re” are contractions while “its” and “your” are possessive pronouns.

Consequently, you can imagine my confusion over the name of America’s deepest river gorge — Hells Canyon — which sits at the intersection of Washington, Oregon, and Idaho. I’ve surmised that it couldn’t have been named after an explorer named “Hell,” because then the canyon surely would have been named “Hell’s Canyon,” to denote the explorer’s possession of it. Even if the explorer’s last name were “Hells,” I’d imagine that the canyon would then have been named “Hells’ Canyon” or “Hells’s Canyon,” depending on whether the cartographer were a Strunk and White fan. (One might argue that if an explorer named Smith had found the canyon, it might have been named simply, “Smith Canyon,” which could be a compelling argument but would require us to ignore the lack of world-explorers (or any people at all, for that matter) with the last name “Hells.”) So, I can only assume that the name refers to multiple hells; in other words, “Hell Canyon” wasn’t nearly satanic enough for the person who named the canyon; apparently he thought that canyon was so deep, so long, so terrifyingly horrible, so hellish, that the only name that he thought could capture the feeling of the multiple hells that the area provoked was the name “Hells Canyon.” 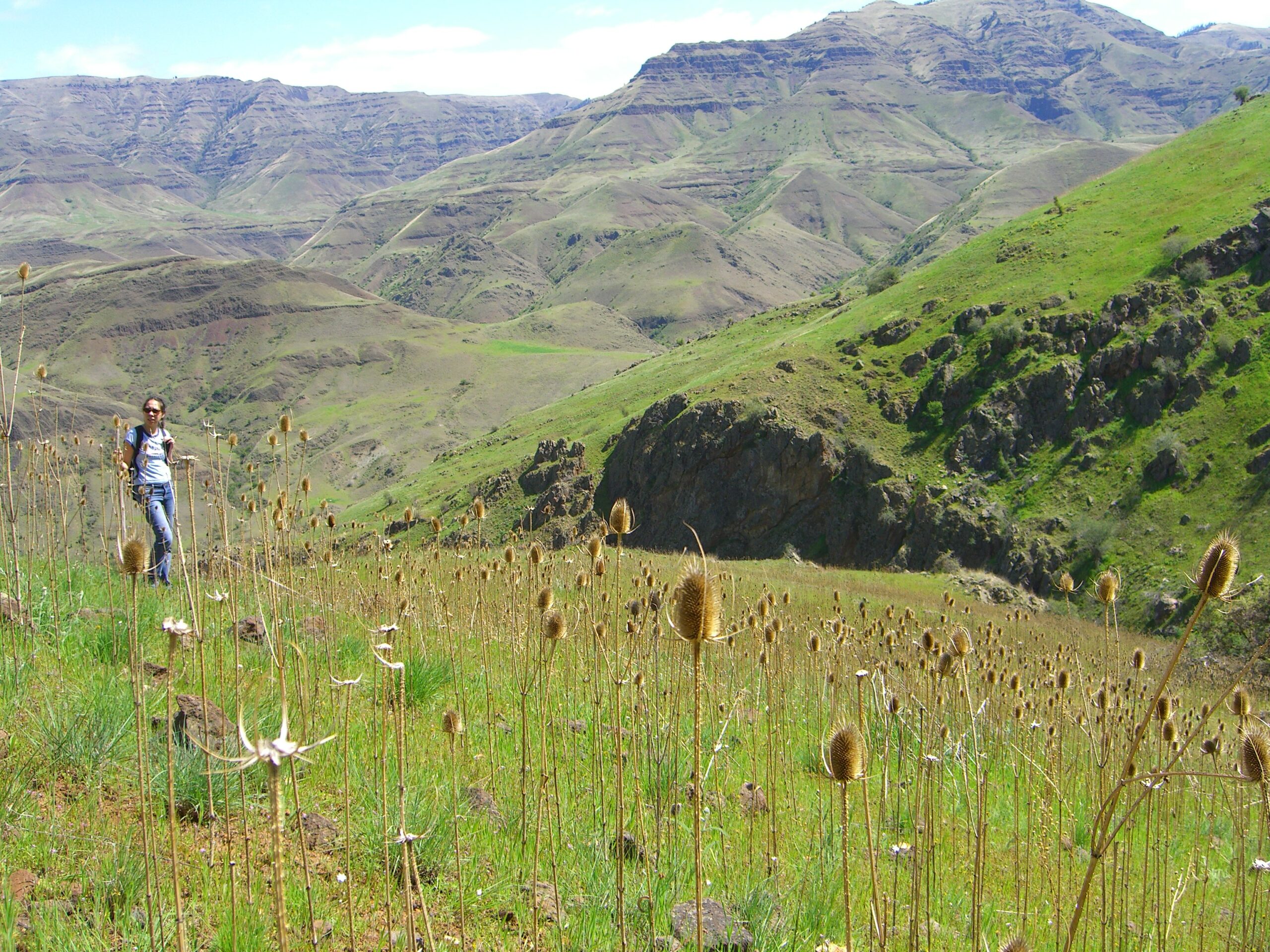 Even this explanation doesn’t seem quite right to me, considering that Hells Canyon is one of the most beautiful and imposing recreation areas in North America. Congress established the Hells Canyon National Recreation Area in 1975, which encompasses 215,000 acres of splendid mountain peaks, raging rivers, canyon rim-rocks, bighorn sheep, and breathtaking vistas. The area is host for many activities, including hiking, horseback riding, whitewater rafting, and fishing, but my friend Christine and I chose to take a jet boat tour of the Snake River and the Canyon with Beamers Hells Canyon Tours, by far the most popular professional tour company in the area.

I was disappointed with some aspects of the tour; I was hoping for an exhilarating jet cruise ride up the river with whitewater close-calls, huge douses of spraying river water, and terrifyingly speedy twists and turns, but instead I got a boringly safe and stable, Plexiglass-enclosed boat that slowly made its way past beautiful scenery and wildlife as senior citizens took snapshots. Maybe Southeast Asia nostalgia got the better of me. The boat ride wasn’t completely without excitement though; near the end of the first day of our trip, one of our engines lost power and started spewing smoke out of the boat’s rear. “We’ll try to tighten the clamps, and if that doesn’t fix ‘er, we’ll replace the turbo-hose,” our captain announced as our boat floated aimlessly and speedily down the Snake River’s fast rapids. I have no idea to which clamps he was referring and I have never heard of a turbo-hose, but eventually we discovered that neither the clamp nor turbo-hose theories were correct. Nevertheless, we managed to arrived at the location of our overnight stay on the river’s edge — Copper Creek Lodge (pronounced as “Copper Crik” by locals) — before a complete disaster.

Accessible only by boat, Copper Creek humorously advertises “modern facilities, including bed and bath linens and hot showers.” The lodge has summer camp-like amenities: we stayed in tiny cabins, used communal showers, and arrived at the dining hall for home-style comfort food at six or seven at night (“Depending on when we catch a fish,” we were told). I ate more biscuits in gravy in that two-day period than I have in the last ten years combined — but wow, desert-dwellers really know how to eat. The Sunday morning breakfast I ate probably packed enough calories to last for an all-winter hibernation if it were necessary.

After breakfast, we decided to tackle a short hike into the mountains adjacent to the camp; we were given a trail map that showed perfect hiking destinations — an abandoned cabin and freshwater spring — not even a mile from camp. However, the lack of detail on our trail map caused us to lose the trail after fifteen minutes of hiking, and within a half-hour we were trekking up an excessively steep mountain side toward a peak that I assured Christine was “really close” and “not that steep.” We made it most of the way up the mountain before our legs turned to jelly and the three-quarters-of-a-mile-plan turned into a six-mile plan. Unfortunately, we had a strict time limit — the Sunday boat was scheduled to pick us up at 2 PM and passengers who missed it would have to wait until Thursday afternoon for the next boat to arrive. So, after a relaxing rest on a beautiful mountain plateau, we made our way down the mountain. We quickly discovered that our mountain descent was even more difficult and tiresome than our ascent, a bragging right that provides proof that a hike is very, very steep. After a precarious trip to lower ground, we serendipitously found the abandoned cabin and trail we meant to follow in the beginning. Clearly, the trail hadn’t been maintained in years, but we relentlessly pressed on, pushing through walls of thorny underbrush and fallen trees until we were covered in burrs, twigs, and leaves. My skin looked like it had been through a cheese grater. For a moment, the canyon’s apostrophe-lacking name with its multiple hells seemed to make perfect sense.

But when we eventually arrived in time for the (Sunday) boat, we both felt a strong sense of accomplishment. The captain had fixed the turbo-hose, and we had the pleasure of relaxing during a peaceful and beautiful boat trip back to Clarkston. We even entertained some young children with magic tricks using my special outdoor-ready, waterproof playing cards. We didn’t just make it out of Hells Canyon alive. We also discovered that Hell is a surprisingly enjoyable place.