Exploring the Land of the Midnight Sun.

JUNE 26, 2010 — Moving to Alaska for the summer has prompted my friends to send me a lot of concerned e-mail. My friend Brad writes, “Do you frequently, at 2 AM, walk out into the blistering midday sun and shake your fist at the gods?” Suzanne worries, “I forgot you have to deal with crazy Alaskan summer nighttime. That must be really weird.” Diana complains, “I can’t sleep when there’s any light, and I don’t enjoy taxidermy.” Everyone seems terrified of the idea of a land where moose hunting is normal and a person can read a book outside, 24 hours a day in the summer. 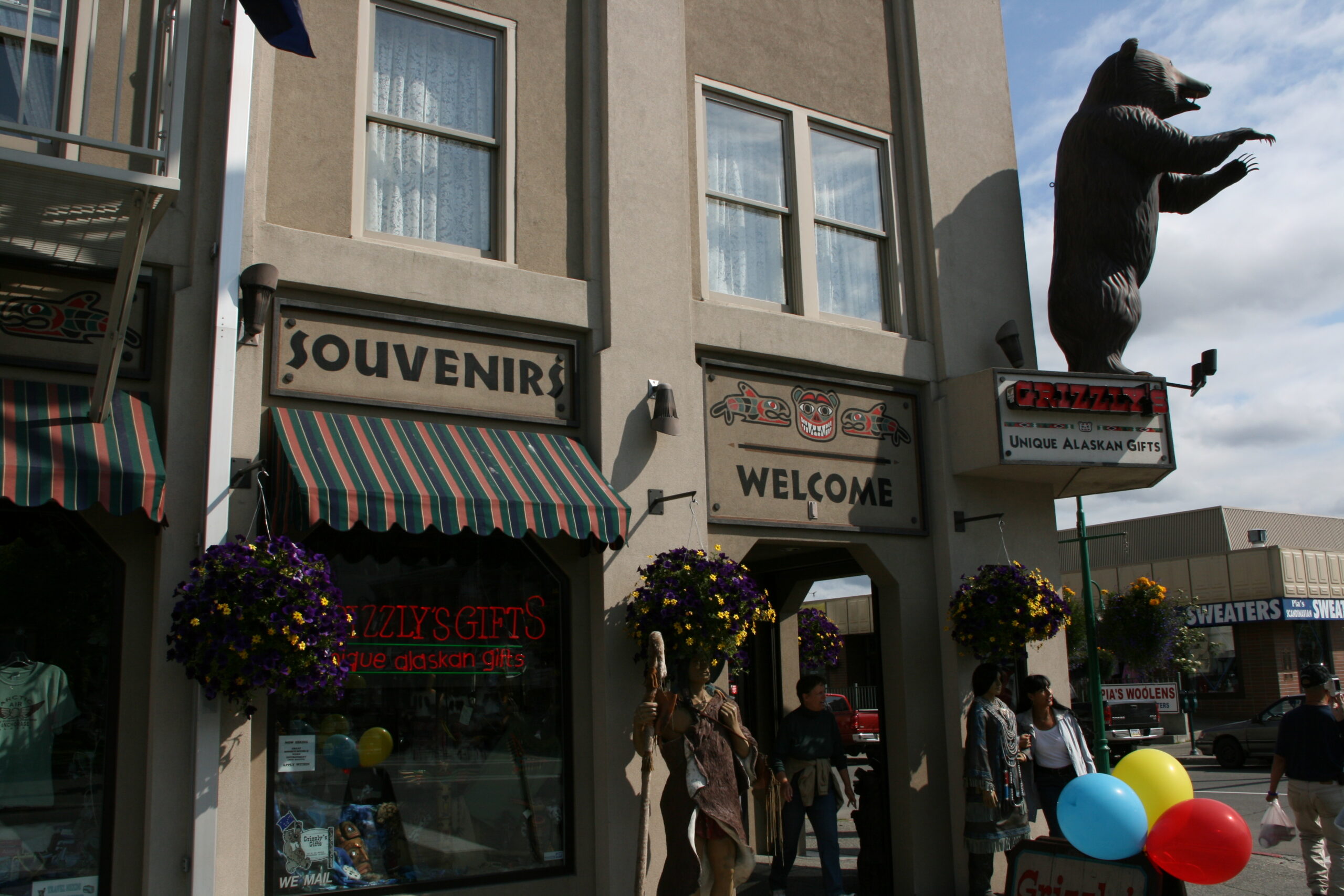 I’ve been a little worried too. Still awake at 1 AM on a Saturday night, I realize that I’ve completely forgotten to go to bed. Light is streaming in through my window, and I don’t feel tired. I get up and close my dark curtains, which quickly prompts my brain to realize that it’s time to go to sleep. When I wake up at 9 AM, my room is still pitch black. I’m confused. I’m not sure which year it is or who’s president. I open my blinds and the eternal Alaska sun helps clear my foggy head. I remember that I’ve set aside this day to hike to the Harding Icefield at Kenai Fjords National Park, but first, I want to visit a camera store.

I drive to downtown Anchorage and walk by Grizzly’s Unique Alaskan Gifts. A huge grizzly bear stands above the store’s sign, and I feel like he’s about to attack me. He’s made of plastic, but because he’s perched so precariously on top of the store’s sign, swaying in the wind, I’m sure he’s more dangerous than any real bear. I walk by as fast as I can and slip into Stewart’s Photo Shop. I buy a new super-zoom lens for my camera, because I recently missed two bear-photographing opportunities — for real bears, not plastic bears — due to my trying to swap camera lenses at crucial moments. 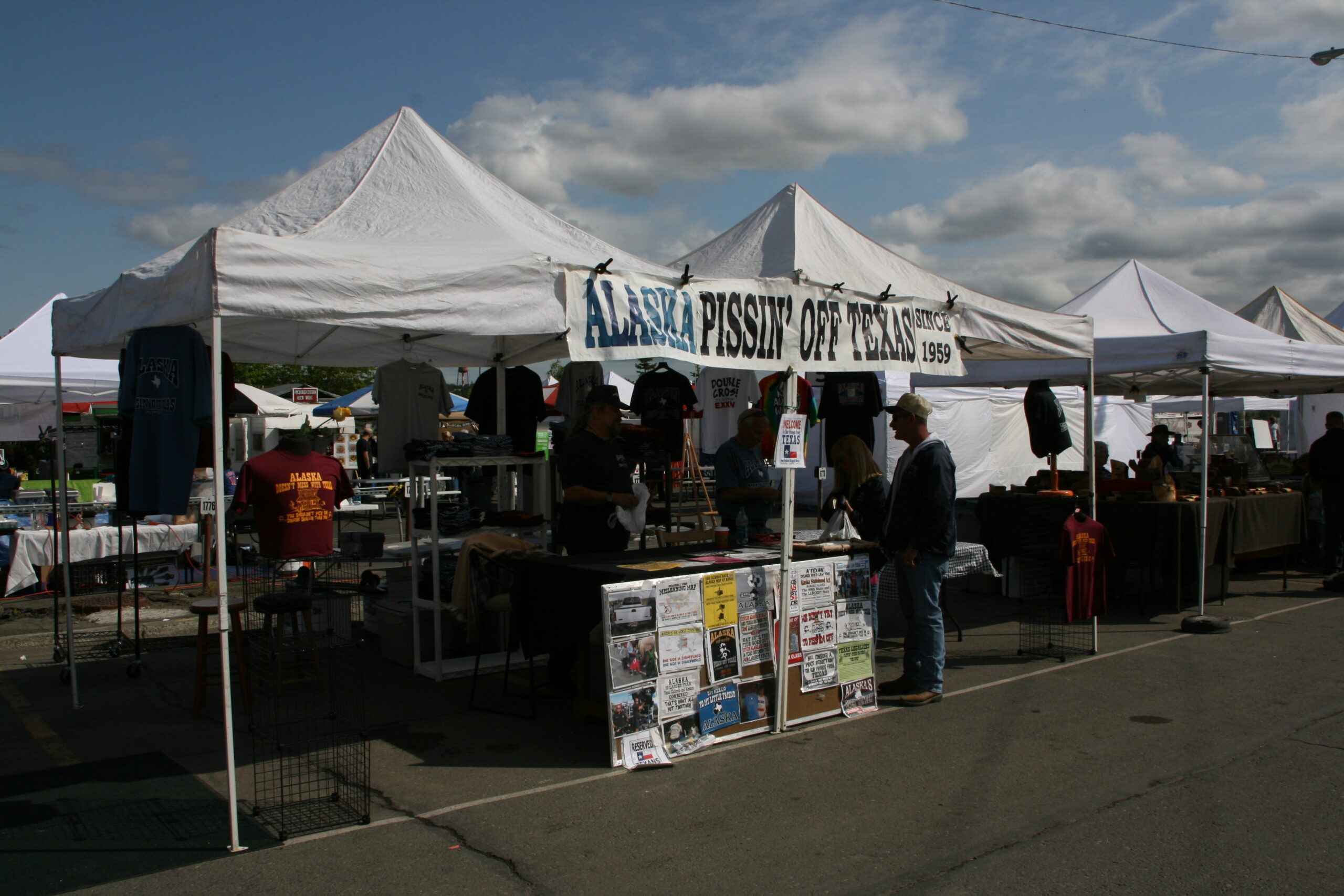 The “Alaska Pissin’ Off Texas” booth in the Anchorage Sunday Market.

After walking back outside, a sign for the Anchorage Sunday Market catches my eye, and I walk toward the intersection of two alleys labeled “Salmon Run” and “Moose Hollow” (could I make this up?), where I see a booth of artistic Christmas wreaths made from expelled shotgun casings (no, seriously, I couldn’t make this up). I look at the wreaths and wonder what Jesus would think. One of them has a small wooden moose attached, apparently to make it appear extra festive. I see another booth with a huge banner reading “Alaska Pissin’ Off Texas,” which, I’m not surprised to discover, is a booth filled with fliers insisting how superior Alaska is as compared to Texas. The evidence? One poster points out that Alaska is the widest state: overlaid on a map of the “lower 48,” one side of the Alaska touches California’s Disneyland and the other touches Florida’s Disneyworld. Touch&eacute, Alaska. You’ve won. I’ve seen how big you are. You’re huge. 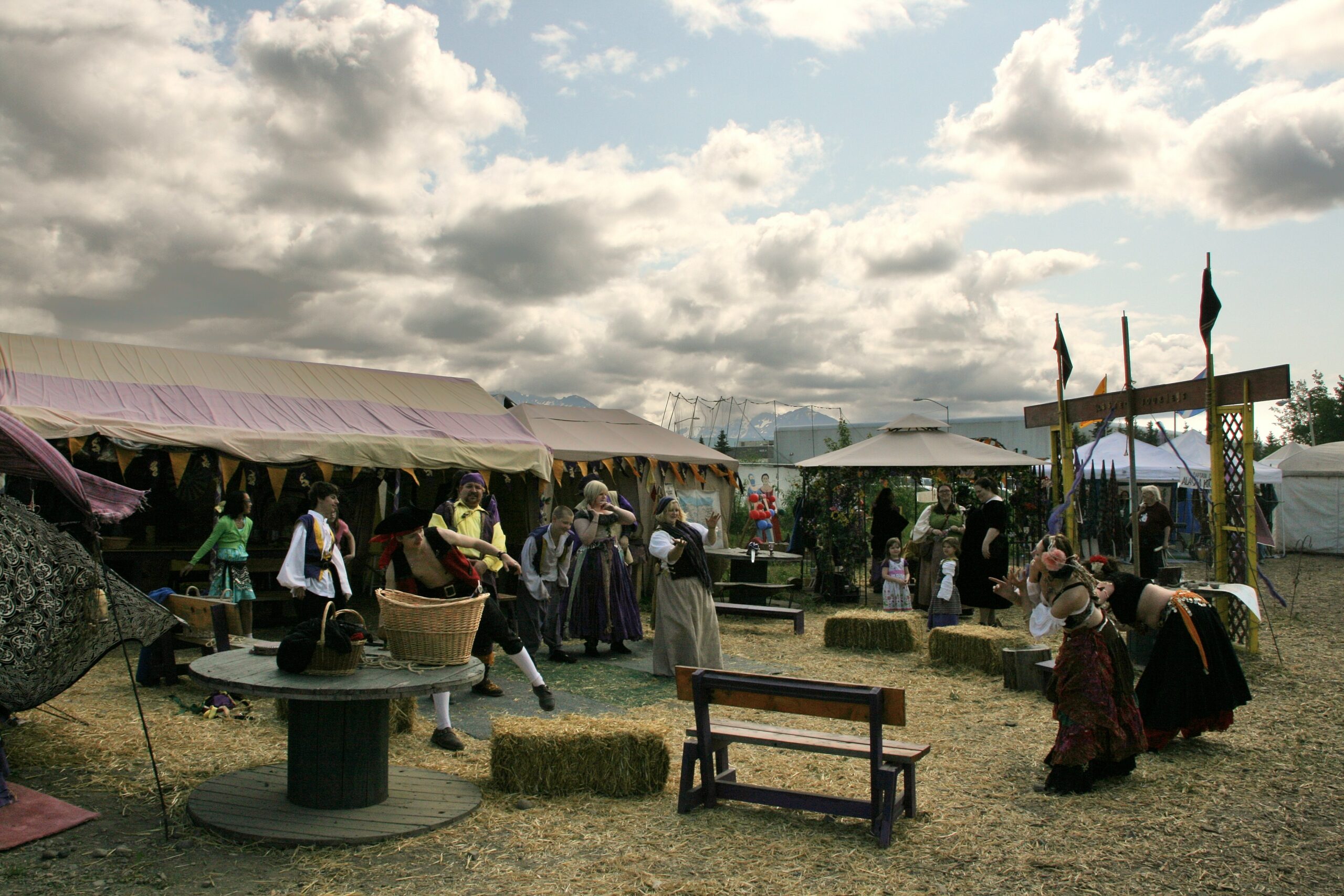 I’m eating an Alaskan Salmon Quesadilla and feeling a little weirded out by another nearby booth selling furs, including “fox faces,” “reindeer legs,” and “small tails,” when a small boy in a scally cap playing a viola asks me if I’m planning on going to see the Three Barons. When I look at him like he’s a crazy kid in a scally cap playing a viola next to a fur trader (he is!), he tells me that Anchorage is hosting a Renaissance Fair called the Three Barons.

By now, it’s already noon, but the kid tells me that I can find the Three Barons on my way to Kenai Fjords, so I decide to stop at the Fair. Of course, I’m a bit underdressed for a medieval court (for one thing, I left my coat of armor and sword at home), but I know that, armed with my new super-zoom lens, no ridiculous outfit will escape being photographed.

I see a man dressed like a sultan with a blue turban single-handedly acting out the Wizard of Oz. Zoom. Two tattooed women wearing corsets convince me to join their belly dancing class. (Even after receiving extensive instruction, I am still a very bad belly dancer.) Zoom. I watch a guy eat a turkey leg (zoom) while two medieval knights/actors-pretending-to-be-medieval-knights sword fight (zoom). I buy and eat an elk Polish sausage, which makes me wonder if elk even exist in Poland. 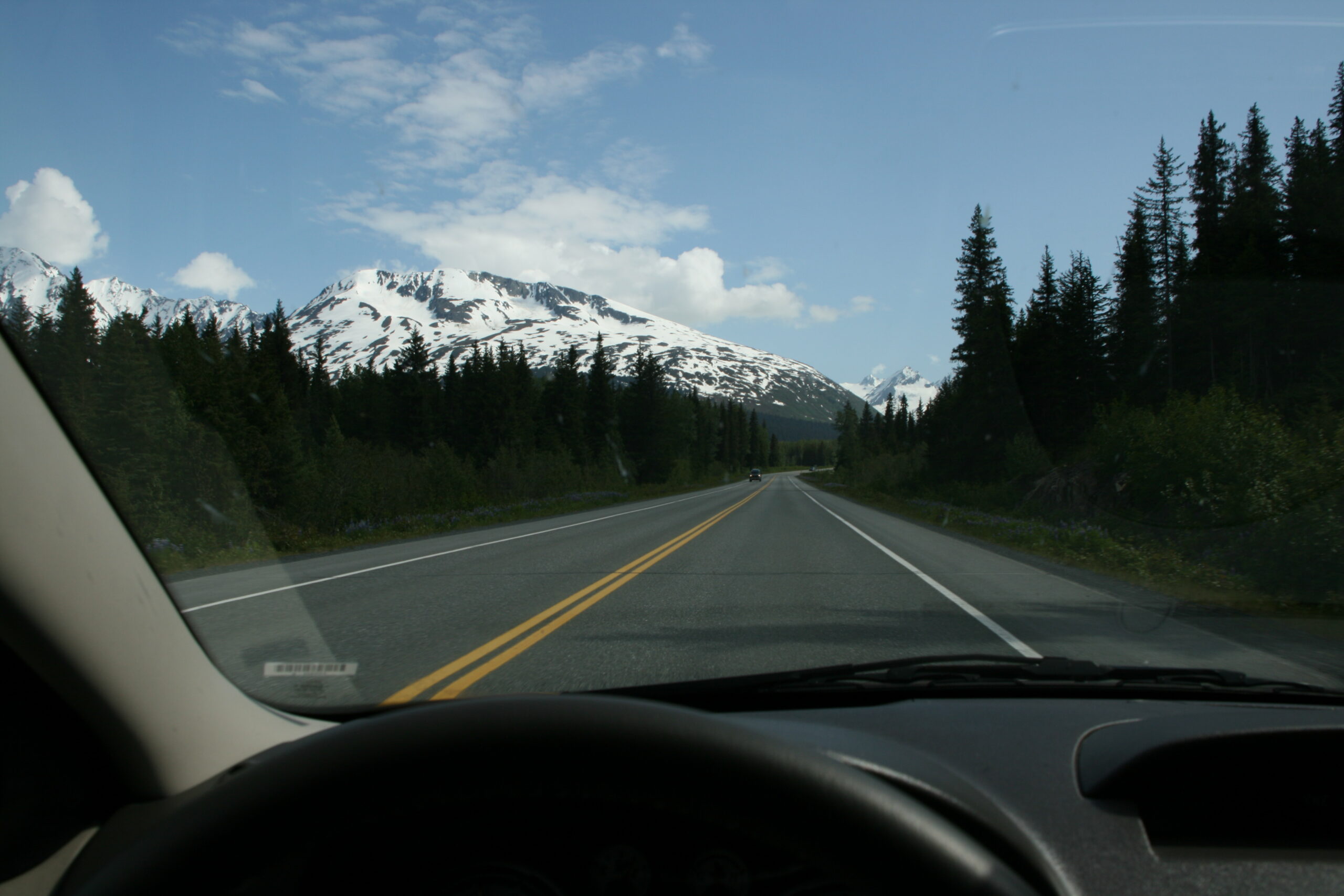 The Seward Highway is one of the most beautiful roadways in the world.

When my new super-zoom lens begins to complain about woolen tunic and gambeson overkill (maybe the complaints were in my head), I begin driving toward Kenai Fjords on the Seward Highway, one of the most beautiful highways in the world. I’m not making good time, because I keep stopping to take photos of breathtaking views of jagged mountain peaks, alpine meadows, and sparkling lakes and rivers that flank the road. By the time I make it to the Harding Icefield Trailhead, it’s 5 PM. I pass a Park Ranger as I start down the trail, and she shouts to me, “Going all the way to the Icefield? Yeah!” Almost anywhere else, the Park Ranger would be trying to stop me from starting the hike so late, but not here. Here, my GPS device tells me, the sun won’t set until midnight. (And even then, it will rise again at around 4 AM and it will never be totally dark in between.) 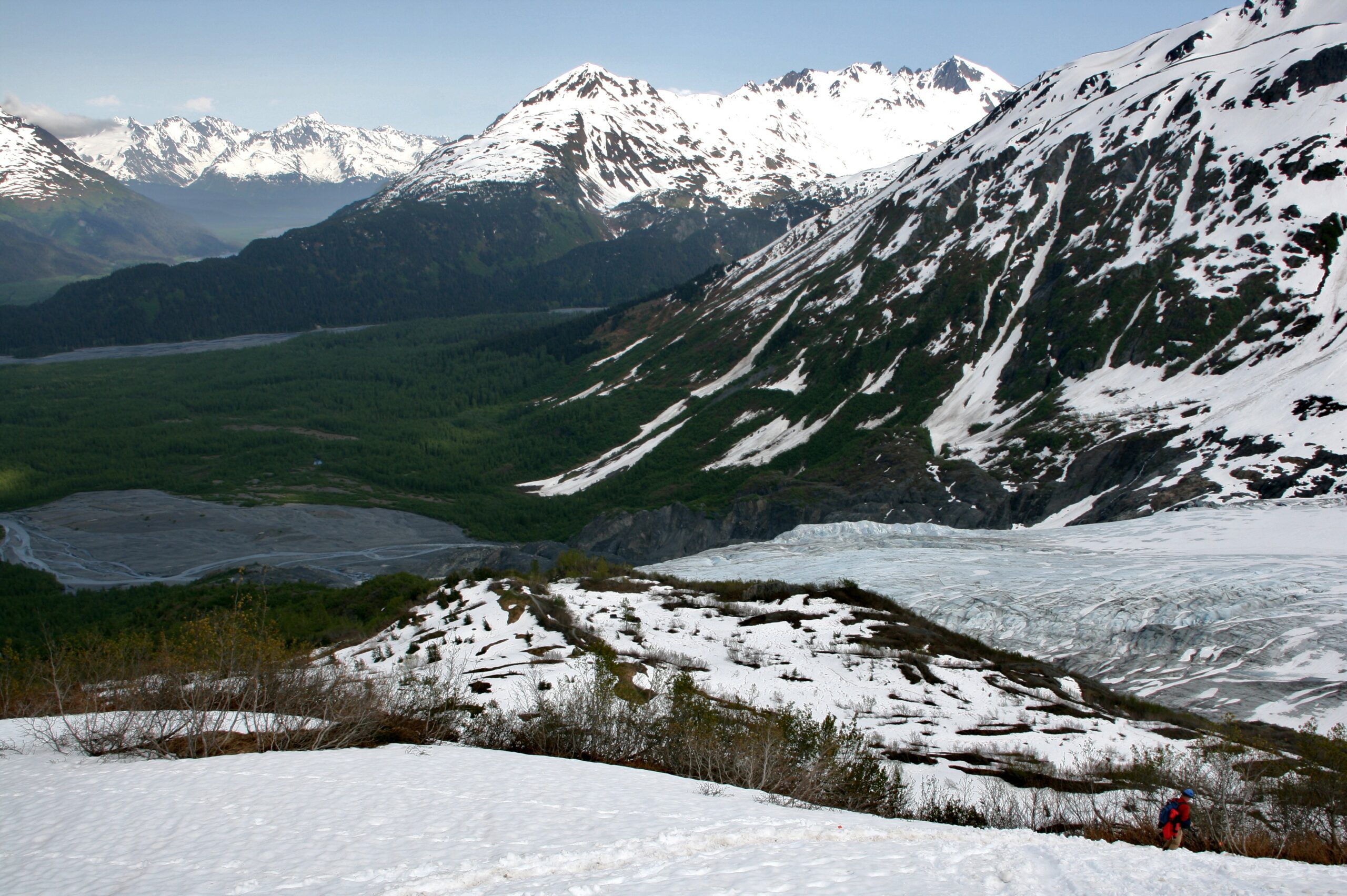 Within minutes of starting down the trail, panoramic views of a fjord (a glacier-created U-shaped valley) come into view, and I see that I’m surrounded by thick forests of spruce and hemlock, the snow-covered Kenai Mountains, and the icy, white and blue Exit Glacier. I see tourists walking to the Glacier’s terminus as I slowly climb above them and hike along the Glacier’s edge toward the Harding Icefield. Thousands of sharp ridges of ice blanket the landscape below. Zoom. My lens seems relieved that there’s not a coat of armor in sight.

As the trail becomes covered in snow, progress becomes challenging, but it’s manageable even without snowshoes. After about three hours and 3,150 feet of elevation, I arrive at the emergency shelter near the Trail’s end, tired, but not spent. After signing the cabin’s summit log, I climb the remaining quarter-mile to the Trail’s summit and take a break to look out across the expanse of the Harding Icefield. Yes, Alaska, you win, I think as I look across the Icefield. You’re so huge, your icefields and your days go on forever. I realize that neither my friends nor I have any reason to fear the Alaskan sun. It’s a practical sun, one that lets travelers fit three days into one.

By the time I make it back down to the bottom of the fjord, it’s past 10 PM, but the sun still shines across the frosty, other-worldly terrain. I sit on a ridge, munching on a Cliff Bar, and I feel like I’m on a far-off, ice-covered planet — a planet whose sun never sets.

In a way, I guess I am. I’m living in the Land of the Midnight Sun.

How to Hike the Harding Icefield Trail

OVERVIEW: The Harding Icefield Trail is an 8.2-mile, 5-hour hike round trip with a 3,150-foot elevation gain. Hiking conditions are best from June to September. Early in the season, about half of the trail is covered in snow, but hikers with boots will have little problem walking through it.

DIRECTIONS: Kenai Fjords National Park is about a three-hour drive, south of Anchorage, Alaska. Take the Seward Highway (AK-1) south and continue southeast on the Seward Highway when it changes to Highway 9. At mile 3.7 on the road, turn right on marked Exit Glacier Road and drive into the Park.

SUPPLIES: Bring snacks, a lunch to eat at the summit, and two to three liters of water.

ROUTE: Even in the snow, the trail is well-marked with signs and orange flags. View the route below or download the Without Baggage Harding Icefield Trail GPS track in GPX or KML format.