Held captive on a ship with delicious waffles by Celebrity Cruises

It's harder than you think to leave Celebrity Cruises.

AUGUST 19, 2008 — For my grandmother’s 85th birthday, my family decided to take her on an Alaskan cruise to Ketchikan, Juneau, Sitka, and the Hubbard Glacier aboard the Celebrity Infinity. Though a sedentary cruise attended mostly by people twice my age was not exactly my idea of an ideal vacation, I nevertheless looked forward to spending time with my family, most of whom live on the opposite side of the country from me. After we planned the trip, however, my work schedule changed, and my available time became more limited. I was a little worried about getting back to Los Angeles from rural Alaska in the middle of the cruise, but it was just a boat, after all, and since the cruise itinerary had a stop at an Alaskan port almost every other day, I figured that I could simply disembark the ship at one of them and return to California.

After boarding the ship in Seattle, I learned quickly that cruises are about one thing: eating. Piloted by the self-proclaimed “Master of Infinity” (the best job title, ever), the ship hosted over 2,000 passengers and along with a casino and two swimming pools, it boasted four restaurants (as well as some snack and martini bars). For breakfast every morning, I drooled on the way to the waffle bar, which seemed to churn out a limitless number of delicious waffles, covered in sweet syrup and fresh fruit. For lunch, we went to the enormous buffet, which occupied half of one of the ship’s floors and provided passengers any food they desired, from pizza to sushi. For dinner, after donning either “formal” dress (tuxedos) or “informal” dress (suits), we went to the enormous dining room and proceeded with a six-course dinner. For my grandmother’s special day, we went in tuxedos to the S.S. United States, the ship’s pretentious but impressive dining room complete with silver trays and covers for every food item. The excellent food didn’t stop coming for four hours, and the heavenly orange dessert souffle that punctuated the meal still makes me drool. 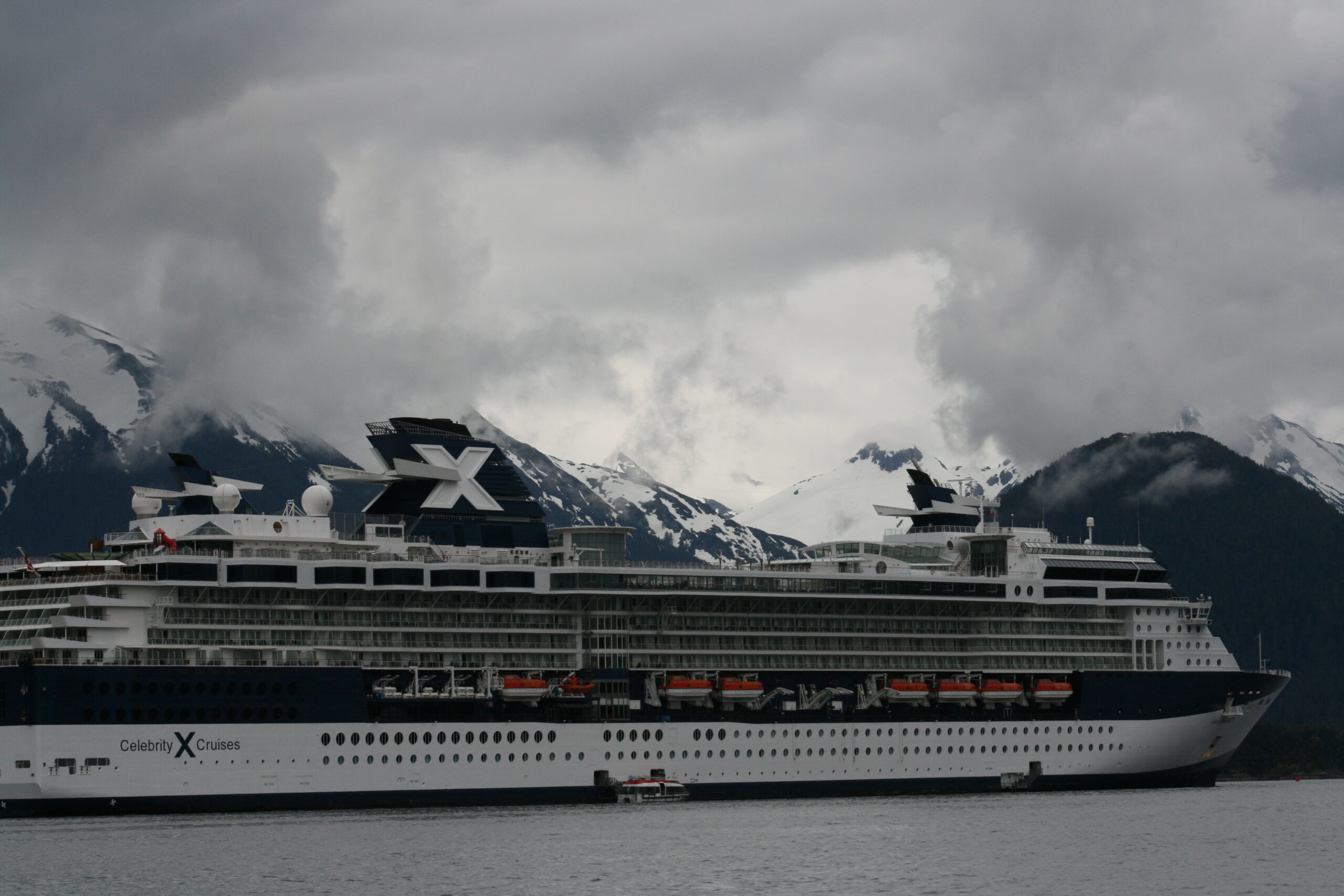 In addition to eating, our time was filled with a variety of other wacky activities. As we chewed on waffles, we saw lectures from Brett Nixon, a naturalist who was mauled by a grizzy bear when he was 22 years old and who kayaked (twice) from Seattle to Sitka. He bounced up and down on the ship’s theater’s stage like a child with ADD as he taught us how to avoid bear attacks (never run) and how to remember Alaska’s five kinds of salmon using our hand: the pinky finger for pink salmon, the silver ring finger for silver salmon, the biggest middle finger for king (or Chinook) salmon, the index finger for sockeye salmon, and the thumb for chum salmon. He loved spouting platitudes about the “astounding” “breathtaking” “magic” of Alaska and repeated words so frequently (“see, see, see, see, see, see, see, see, see, the magic of Alaaskaaah!”) that I questioned his sanity but never his commitment.

With a plate of waffles, we watched a Broadway musical revue of questionable quality as the boat’s stage swayed with the rocking of the ocean, learning that it’s not clear that musical numbers from Cabaret and West Side Story should ever be performed back to back.

Near the waffle bar, we even watched people take professional souvenir photographs in front of a painted background of the Titanic’s grand staircase, and we wondered if the story of the Titanic was really the cleverest icon to associate with a cruise line.

In an attempt to work off some of the food, my brother and I went on a kayaking trip, but the trip was so relaxed and tailored for cruise ship passengers that we barely had to paddle. Even the ship’s laid-back cycling class barely caused us to break a sweat.

Nevertheless, seeing Alaska’s grand landscape from the ship’s huge windows while scarfing down perfectly crisp waffles was an exceptional treat, especially when we visited the Hubbard Glacier, a sight even Brett Nixon could not manage to oversell (though he came close).

When we reached Juneau, I had to return to Los Angeles. But when I tried, with my luggage, to leave the ship along with the hundreds of other passengers disembarking to see the city, the ship’s crew stopped me and informed me that I would not be permitted to leave the ship with my luggage. Then, in the rudest possible way and without explanation, the ship’s security escorted me, as though I were a criminal, to the ship’s Guest Relations desk, where the security officer informed the concierge that I had tried to escape.

Apparently, some brain-dead U.S. lawmakers passed the Jones Act in 1917, which among other things, fines foreign cruise ships that allow a ship passenger to disembark from a ship in a state different from the one from which he originally boarded. Because most cruise ships, including the one I was on, operate under a foreign flag to avoid being subject to a number of U.S. laws, the cruise line wouldn’t let me off the ship. I was afraid I would be trapped on a huge floating city, being forced to “enjoy” a pleasure cruise where I could eat, swim, eat, and learn about nature as much as I wanted — for all of eternity. I imagined being locked in the theater with Brett Nixon yelling at me, “You will stay, stay, stay, stay, stay on this amazing pleasure cruise, and you will like, like, like, like, like it in Alaaskaaah!”

For over an hour, Celebrity Cruises held me on the ship against my will as I argued with them about the ridiculous bureaucracy of it all. Finally, they agreed to release me from their custody after fining me $200 and sending me to U.S. Customs (though I had never stepped foot on foreign soil, being on the foreign cruise ship evidently required me to “reenter” the United States through Customs). The way the cruise line’s security had treated me, it was though I had tried to steal their precious waffle-making apparatus from the waffle bar and smuggle it off the ship. Except I was just trying disembark and return home, in my own country.

Eventually, I escaped their clutches. At U.S. Customs, they barely looked at my paperwork and let me continue on to the airport. But I miss the waffles.