Separated by the Red and Blue Lines

FEBRUARY 21, 2009 — Anyone who knows me knows that I get cranky when I’m hungry. I stop talking and shift into a comatose state, walking down the street like a soulless ghost until I find a café selling smoothies or panini. This past December, I sat comatose on a flight to San Francisco after rushing from work without eating lunch.

A girl I had been dating had asked me to visit her in northern California before I flew to Patagonia, and against my better judgment, I agreed to pack early and spend my originally scheduled packing-day on a whirlwind, 24-hour Bay Area tour. I admit that the excitement of hearing Orbitz’s automated computer read details of a 12-flight itinerary to me over the phone distracted me from analyzing whether my plan actually made sense.

Starving, I landed in San Francisco and texted her — no one flirts over the phone anymore, and I was too hungry to talk anyway — and she agreed to meet me at the airport. But the Vice President In Charge of Signage who designed the San Francisco International’s signs infuriatingly didn’t think it necessary to post the airport terminal numbers inside the terminals. Based on the AirTrain map, I deduced that I stood in the International Terminal (which, according to the sign, handled all international flights and strangely, my airline, Virgin America), and my friend agreed to hop on the Blue Line train and meet me at the terminal’s train station.

After waiting for her at the station for a few minutes while dreaming of garlic bread and gnocchi, she texted me, “I’m here,” but she was nowhere to be seen. I texted back, “Me too but I don’t see you.” Eventually, she broke the apparent golden rule of modern dating (never make a phone call) and my iPhone rang. (With a real ringing sound, no less.) Quickly, we deduced that we weren’t separated by parallel universes but I was in fact standing in the wrong station — apparently even the few signs posted in the terminal were wrong. After some analysis of the map of the airport’s Red Line and Blue Line trains — trains which go to almost all the same destinations in opposite directions — I agreed to board the Red Line to meet her at the International Terminal. A few minutes later, I arrived there excitedly, desperate to finally eat some pasta and gelato, only to discover her still missing. I wondered if we were indeed separated by parallel universes after all, both at the same train stop but unable to see each other. Amused, I texted her again, “You’re still not here.” The phone rang again. Laughing, she explained that she had discovered that she was mistakenly standing at Terminal 3 instead of the International Terminal. She told me she’d jump on the Red Line, and one stop later, she’d be at my station. 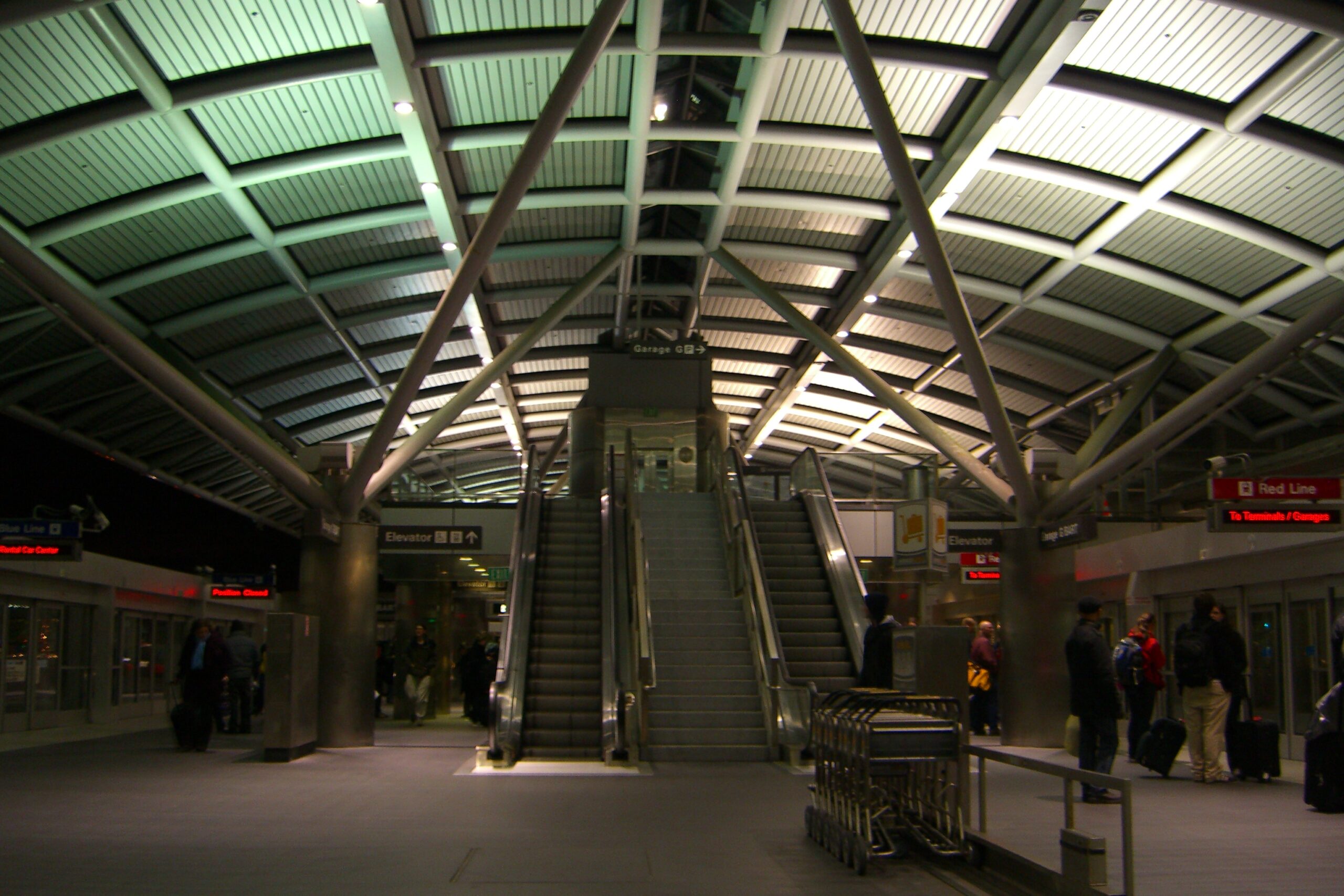 Signs for the Blue Line (left) and Red Line (right) in an AirTrain terminal at the San Francisco International Airport.

I sat in the International Terminal’s station, drooling as I thought of biscotti and tiramisu, watching train after train arrive and leave without my friend. Finally, after about twenty minutes, a train arrived and she finally bounded off. The confusing bidirectional trains and lack of airport signs had caused her to ride the entire train circuit in the wrong direction, until we finally found ourselves back in the same universe.

After laughing about our slapstick AirTrain comedy, we finally managed to eat at an Italian restaurant downtown, and my coma was lifted. After dinner, we proceeded to the Union Square Holiday Ice Rink, donned ill-fitting, rented skates, and tentatively skated onto the ice. A night of romantic ice-skating on rented skates is like sinking on the Titanic with your star-crossed lover — it looks beautiful on film, but it’s a lot more uncomfortable than you realize. Nevertheless, below the sparkle of Macy’s and an enormous Christmas tree, we enjoyed ourselves as we carved the ice — which is more than I can say for Jack and Rose and for the innocent bystander I forced to take our photograph and then e-mail it to us because I had forgotten my camera. 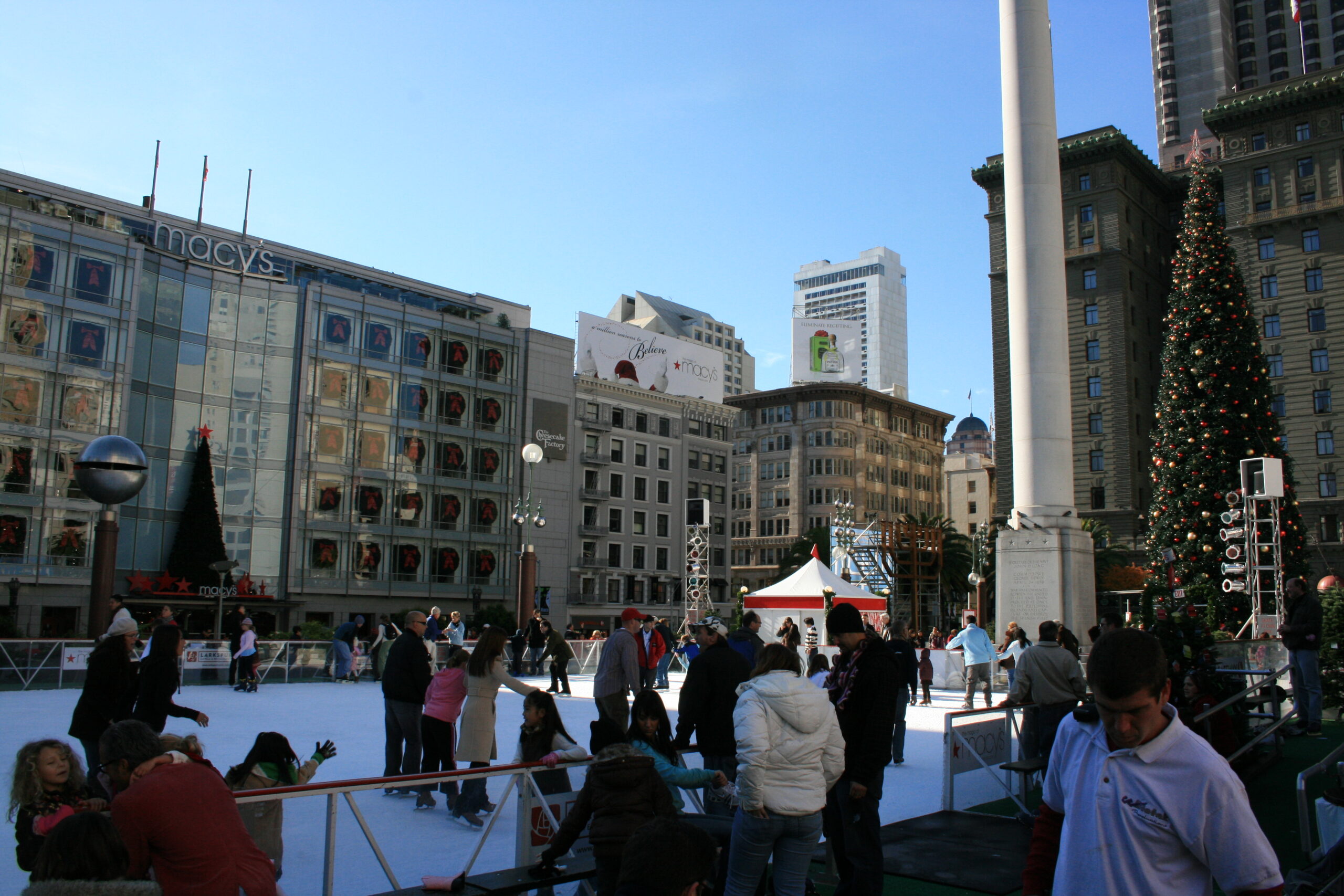 The next day, we took Alcatraz Cruises (really?) to Alcatraz, yet another stop on my continuing unintentional tour of the world’s most awkward tourism genre: derelict island prisons. (Read about my strange trip to South Africa’s Robben Island. Will Guantanamo Bay be next?) On the island, we listened to the exceptionally excellent audio tour (seriously, don’t miss it), narrated by real guards and inmates who spent time in the prison. The sparkling views of San Francisco from the exercise yard and guard station made Alcatraz seem almost like a paradise, until we heard the stories of food riots, solitary confinement, and escape attempts. Admittedly, we took the requisite, “We’re trapped in this cell!” photos with no irony and then proceeded to the Alcatraz gift shop. The shop sells copies of stolen guard keys, shower soap, and “Alcatraz Swim Team” T-shirts with seemingly no sense of the oddity of selling souvenirs for a high-security prison that housed serial killers. In defense of the National Park Service, the souvenirs sold at the Alcatraz gift shop are not nearly as inappropriate and insensitive as the similar souvenirs sold on Robben Island.

After returning to the mainland, eating dinner, and leisurely shopping, we lost track of the time. I realized that I’d need to get to the airport on the train in under a half hour to catch my first flight to Patagonia, an impossible feat. We ran together through the brisk winter air of downtown of San Francisco, which, compared to the horrid sprawl of Los Angeles, felt like a charming town in Southern France. We rushed into our hotel to grab my luggage and then sprinted down under the street to the subway train. When we arrived frazzled at the airport, my friend was sure I wouldn’t make it to my flight, but I wanted to sprint to the check-in desk to try. She agreed to meet me there to say goodbye, assuming I wouldn’t be in a hurry because I’d have to catch the next flight out. But when I made it to the desk, the helpful Virgin America agent agreed to check me in with only 20 minutes before my flight’s scheduled takeoff, and I rushed through the security checkpoint-checkpoint, then through the security checkpoint, and on to my gate.

I didn’t see much of my friend when I returned from Patagonia.

Maybe, after disembarking from the Red Line, she arrived at that check-in desk, confused again that I was missing. Maybe she assumed that we were truly separated by parallel universes.