I chose the “speed boat”

Using a machete to repair a speed boat in the Mekong River.

MARCH 25, 2006 — Traveling brings with it a host of tough decisions: the cheap hotel or the expensive one? Stay another night or move on? Bus or plane? Purified or tap water? Museum or temple? Beer or mixed-drink? Taxi or walk? Good travelers make these decisions instantly to keep everything moving; bad travelers get bogged-down trying to decide. This is why traveling with others can be so difficult — people spend too much time arguing and not enough time traveling.

Instead of catching my scheduled flight back to the U.S. this morning (why return to your home country when you can visit a new country?), I decided to make the journey to Laos, the country bordering eastern Thailand, and visit Luang Prabang, one of the most remote cities in Southeast Asia and the religious and artistic capital of Laos. To accomplish this feat, I had to do the following: 1) get a visa exit stamp from a Thai official, 2) take a ferry across the Mekong River from tiny Chiang Khong to tinier Huay Xai, 3) buy a Laos tourist visa from a Lao official, 4) travel 300-km southeast down the Mekong River, arriving in Luang Prabang.

At this point, I was presented with a difficult decision: “slow boat” or “speed boat”?

Taking the “slow boat” costs 206,950 Lao Kip (about $20 US) and takes more than twelve hours over the course of two days, with an overnight stop in town Pakbeng. Seats in the “slow boat” are more comfortable than in the “speed boat,” but the slow boats often become overcrowded with additional cargo.

The “speed boat” costs 336,298 Kip (about $33 US) and takes about seven hours, including a one-hour lunch break. These boats are the size of a thin canoe, and each passenger sits in small compartments divided by wooden boards. While these boats have fast engines, the engines are deafeningly loud, and the boats are prone to capsize at high speeds.

The backpackers in Huay Xai hotly debated this topic. In the common backpacker spirit of “I’m so much more hard-core than you,” some scoffed at the idea of taking the fast boats, suggesting that fast boats are not the “real” way to travel to Luang Prabang. Others (like me) thought that more than twelve hours on a river (or on any mode of transportation) was more than they were ready to handle.

I chose the “speed boat.”

I was already traveling on borrowed time — my flight back to the States had already left without me on it! I decided that I couldn’t afford the extra day required to make the trip by “slow boat,” despite the fact that Lonely Planet and Fodor’s both strongly recommend the slow boats for their leisurely trips down the river and slightly more comfortable seating and better safety record.

Little did I know that my choice (and the choice of seven other passengers) included less than two square-feet of space per person (literally) to sit on the boat floor with our legs crossed, barely able to move, for six hours. After the first half hour in this position, I had decided that I wouldn’t be able to make it and started imagining insane backup plans involving 300-km riverside hikes and bushels of strawberries. But slowly, I became accustomed to the arrangements by pretending that I was doing a Survivor immunity challenge and passed the time by watching the scenery, reading, and adjusting my legs a couple centimeters every so often in an attempt to get comfortable. 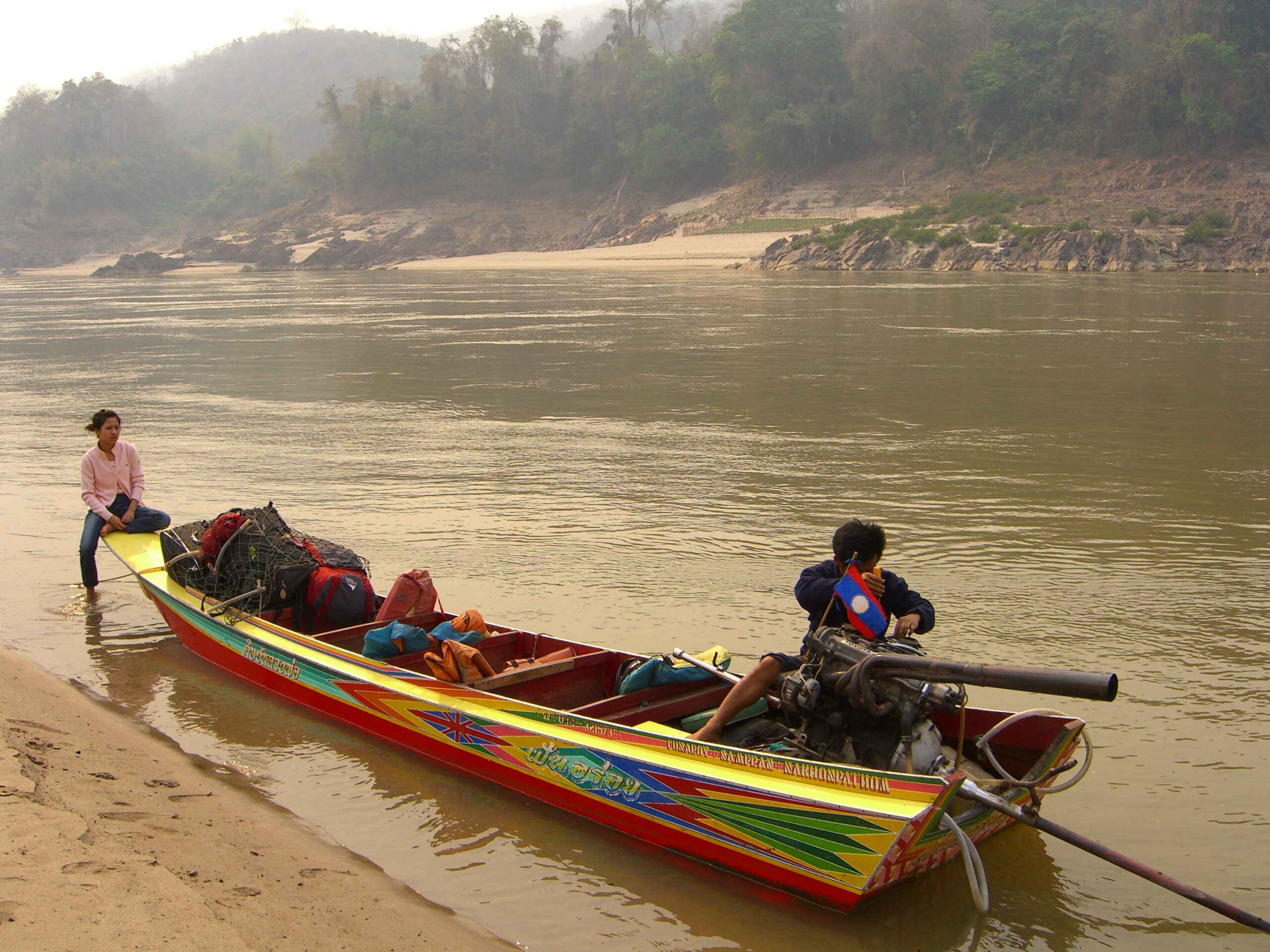 Thus, the first few hours passed mostly uneventfully. The Mekong River is in an exceptionally remote area of northern Laos with no roads and almost no towns; during the trip, we saw very few people: only a few fisherman and children from microscopic riverside villages. The river scenery is stunning; cliffs, crags, and forests make up the landscape — it truly feels like a boat trip out of Conrad’s Heart of Darkness. Every hour or so, our driver would stop the boat on a beach without warning or explanation and spend twenty minutes “repairing” (we think that’s what he was doing) the engine by seemingly randomly removing parts and making adjustments with a machete. Yes, that’s right — he used a big knife designed for clearing jungle paths to repair the engine. I had no idea that machetes were part of the standard boat-engine repair kit. Now I know.

After lunch, the driver moved us and our luggage to a new boat with a new driver (maybe that machete didn’t work so well after all), and we reluctantly began the final three-hour trip toward Luang Prabang. The scenery was beautiful, and our legs and backs were screaming for help.

With a half hour remaining in our trip, our driver stopped the engine in the middle of the river. We asked him if there was a problem, and he said, “Luang Prabang.” Of course, he couldn’t speak English and we couldn’t speak Lao. We tried to ask another Lao-speaker on the boat to help, but he was too busy applying mascara (we didn’t understand it either). Our driver pulled out his cell phone (developing countries tend to have very good cell phone coverage, because it’s their only communications system). We asked who he was calling, and he said, “Luang Prabang.” After the call, he walked over us to the front of the boat, and with a tiny oar, he started rowing us forward. When we asked why he was rowing instead of using our machete-repaired “speed boat” engine, he said “Luang Prabang” and pointed forward. At least we knew that our destination was at the forefront of his mind.

The English-speaking passengers started floating theories. A British woman suggested that we were traveling through a “sacred area” (there appeared to be religious ruins nearby), and our driver had turned off the engine out of respect. That theory was thrown out when three boats whizzed by us as our driver kept rowing. The other American on the boat surmised that our driver had decided to treat us to a relaxing final half-hour so that we could take pictures and enjoy the scenery. He was so sure of this theory that he pulled out his marijuana supply and started rolling a joint to enjoy the final leg of the trip. I suspected that our engine had temporarily overheated, and our driver planned to row the boat forward until it cooled down. No one knew anything for sure, except that the driver really, really wanted to get to Luang Prabang, even if it meant using an oar.

Fifteen minutes later, another “speed boat” arrived and pulled up beside us. The driver of the new boat started transferring our luggage to the new boat in the middle of the river. Scenes from Deliverance flashed through my mind. After we all transferred to the new boat, we were forced back into our two-square feet of space. While I secretly suspected this new boat to be a river-pirate boat with a driver who planned to kidnap us, steal our luggage, and kill us, I had no such luck. Fifteen minutes later, we arrived on a beach in the middle of nowhere, which turned out to be the dock for Luang Prabang. Somehow, we made it.

For future reference, I recommend the “slow boat.”

They chose the “slow boat”

All choices are bad choices on the Mekong River.

Remember Jim, the Brooklynite backpacker traveling with two Australians whom I met in western Thailand before embarking on my jungle trek? Coincidentally, I ran into him again in Luang Prabang in Laos, literally thousands of kilometers and a country away from the place I had last seen him. Happy to see a familiar face, we chatted about our travel experiences thus far, and then he dropped a bomb.

He chose the “slow boat.” And he hated it.

As you may recall, I previously appealed to Without Baggage readers, strongly suggesting that if one decides to make the trip from Huay Xai to Luang Prabang via the Mekong River, he should indeed do so on the “slow boat.”

Unbelievable as it may seem — despite my “speed boat” experience involving a canoe-sized boat; a deafening, machete-maintained engine; and death-defying turns and jagged, rocky water obstacles — the “speed boat” may have been the right choice after all. I’m sorry if I have done my readers a disservice.

According to Jim, the “slow boat’s” seats were exceptionally uncomfortable — though I doubt they could have been worse than the (lack of) seats on the “speed boat” — and the boat was painfully crowded. He also complained vigorously about motion sickness. But the worst part, he told me, was his overnight stay in Pakbeng, the village at the journey’s halfway point. Jim described the prearranged guesthouse — one actually named “Only One Night” — as a “hell hole” unlike any other he had seen during his trip. Keep in mind that most of us, Jim included, spent every night in Asia in 250 Baht ($6 US) per night guesthouses; so, when another backpacker describes a guesthouse as Jim did, you know it was bad. 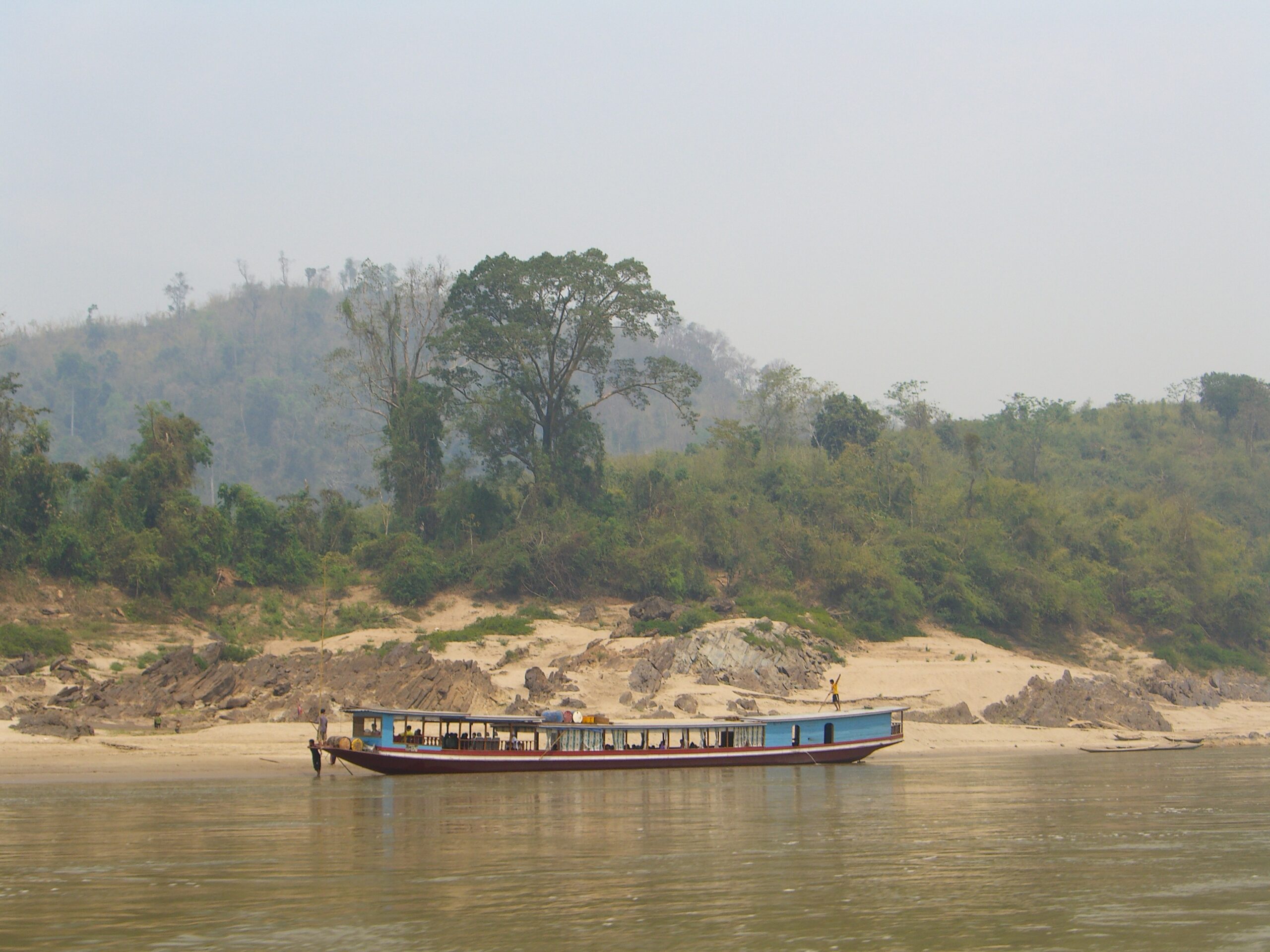 Jim isn’t the only one who believes that the “slow boat” was a bad choice. Another loyal Without Baggage reader, Cindy — one of my primary inspirations to backpack in Thailand — wrote me with the following succinct message:

“I took the slow boat. It was exactly the same experience [as the speed boat] except two days long. You made the right choice.”

Thus, I have no choice but to recommend the “speed boat” — only because it’s the least painful of the two options because the trip is half as long and requires no overnight stay in “Only One Night.”

If you’re sure you want to take the dramatic journey down the Mekong River but can’t bear the thought of the “slow boat” ($20 US) or the “speed boat” ($33 US), there is one more option. If you have unlimited cash to burn ($221 – $331 US), you can try the LuangSay luxury boat, specifically designed for leisurely river travel. The boat cruises down the Mekong with an overnight stay in the comfortable LuangSay Lodge in Pakbeng but only leaves on specific days. I have never tried the boat so I can’t vouch for it, but it might be worth a try.

If you do so, however, you’ll be unable to brag that you tackled one of Southeast Asia’s most painful and thrilling rites of passage: a “slow boat” or a “speed boat” down the Mekong.