The fakest place on Earth

Why Las Vegas is a horrible place.

NOVEMBER 2, 2008 — I had read about The Wave, a sandstorm formation near the Utah-Arizona border, a handful of times in newspaper travel sections and outdoor adventure magazines. It was on my (very long) list of places in the world to visit in the future, but on Monday morning last week, as I sat in my office, Internet surfing brought me again to a Los Angeles Times article about The Wave. I sent a quick e-mail to a friend in Seattle alerting her to The Wave’s existence and that someday, I wanted to visit it. She e-mailed me back offering to fly to Los Angeles four days later, on Friday, in order to visit it over the weekend. Admittedly, knowing her personality, I suspected my offhand e-mail might prompt such an adventure.

On Friday night, after work, I raced through Los Angeles rush-hour traffic to pick up her up at the airport. After navigating the never-ending curbs of LAX’s badly designed eight terminals, we immediately started the long, nine-hour northeasterly drive toward Utah in the dark. We didn’t know exactly how far we would get before exhausting ourselves, but we pushed onward, knowing that any outcome other than standing atop The Wave by the end of the weekend we would consider a devastating failure.

After five hours of driving, we made it to Luxor hotel in Las Vegas around midnight, and we were ready to take a break. As I walked toward the sleazy-looking concierge at the check-in desk, cigarette smoke and grimy tourists enveloping us, I realized something I had always subconsciously known but had never articulated with much clarity: Las Vegas is a horrible place.

When we awoke in our hotel room in the morning, my friend and I walked past thousands of slot machines and ridiculous statues of Egyptian rulers to visit the hard-to-find Luxor breakfast buffet. Las Vegas is the kind of place in which people are forced to pay for champagne with breakfast buffets, even though no well-adjusted person wants to get drunk at eight o’clock in the morning. We too reluctantly paid for our champagne. Leaving the hotel, we began walking down Las Vegas Boulevard atop a ridiculous network of indoor and outdoor pedestrian bridges, through a fake castle, a fake New York, a fake Venice and Rome, a fake Paris, and topping them all, a fake Treasure Island, modeled after, well, nothing, since Treasure Island is not a real place. 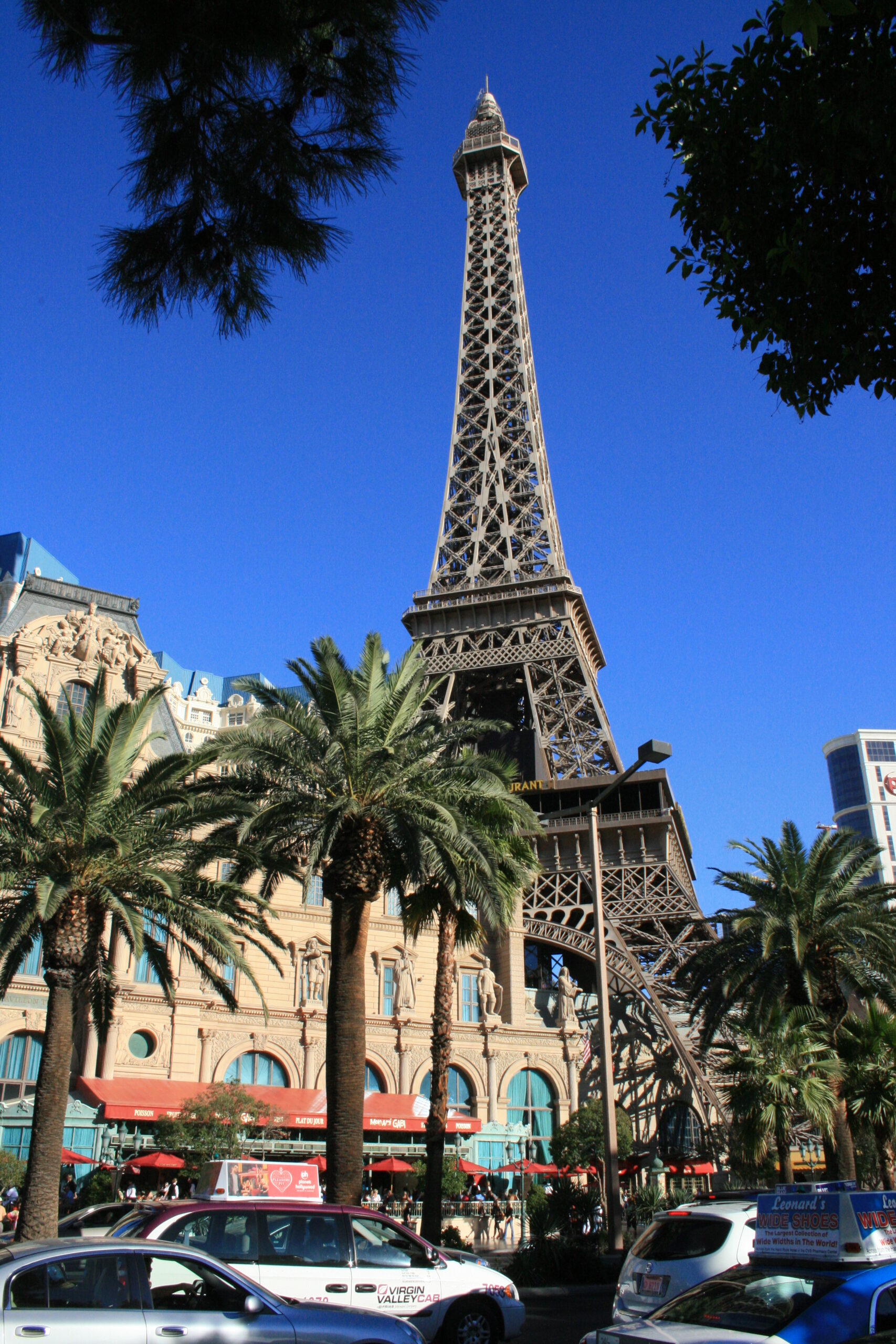 A fake Eiffel Tower in front of palm trees at the Paris Casino in Las Vegas.

As we endured the miles of people movers and relentless air-conditioning, I came to understand Las Vegas’s true essence. Las Vegas is an enormous airport that never ends.

Like the casinos in Las Vegas, airports are such offensive places because they’re all the same. Drop me in London Heathrow or New York’s JFK or Bangkok’s Suvarnabhumi or Anchorage’s Ted Stevens, and I’ll be hard-pressed to tell the difference between their people movers and McDonald’s restaurants. (Some notable exceptions including the charming, wood-paneled Keflavík International Airport near Reykjavik, Iceland and the Denver International Airport with its mountain views.) Most airports are facades that hide the real character of their host city, trapping travelers in bubbles of middling colorlessness.

Yet we had heard rumors of an escape: a casino with a fake, painted-sky on its ceiling that cycled through a one-hour day of sunrise and sunset. With visions in our heads of glowing stars and glorious sunrises, we were repeatedly disappointed by the unexceptional blue ceiling at the Paris Casino, then the one at the Venetian, and then the one at Caesar’s Palace, but we continued searching. On one stretch of Las Vegas Boulevard, we were given the privilege of walking outside, on an actual sidewalk, past large stretches of obtrusive over-construction (again, just like an airport). As we walked, I looked up at the sky, and the ridiculousness of our search hit me. The real sky was right above our heads, as good as any painted ceiling — much better, in fact.

After calling off our fake-sky search, I noticed an ocean of terrifying, inhuman machines in front of the Mirage casino through a curtain-covered construction fence. We were getting a glimpse into the underbelly of Las Vegas and what the sign called “Mirage Volcano Enhancement.” We were seeing a view that no Las Vegas tourist was ever meant to see. Presumably, the hundreds of scary, black cybersharks would eventually become a mechanized sea of molten lava — an artificial sea, of course. Looking behind Las Vegas’s literal curtain, the real Las Vegas was revealed — and it was fake.

I thought of the city’s famous ad campaign, which proudly proclaims, “What happens here, stays here.” This ad, despite the Las Vegas tourism board’s best intentions, reminded me of the best way to deal with Las Vegas: leave it.

After inhaling more smoke, losing $100 playing blackjack, trying desperately to exhaust our free credits on a “promotional” slot machine, being constantly accosted by street hawkers, and walking for miles through the seemingly infinite shopping mall at Caesar’s Palace, we got back into our car parked below a fake Egyptian pyramid and drove as fast as we could toward the beautiful deep purple and rusty red Utah desert — a real place — a natural place — a place with real glorious sunrises and glowing stars where people aren’t forced to drink champagne for breakfast.